This Publication Advises You Not To Buy An Xbox 360 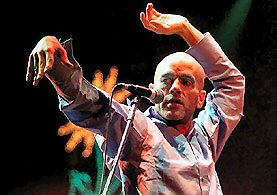 Microsoft's Jay Allard employs a suggestive dance and his coldly calculated fashion sense to sell a horrible video game system to today's youth. Not pictured: The rest of the universe at the time this photo was taken.There seems to be an awfully big hubbub about Microsoft's upcoming video game system, the Xbox 360. The console will arrive in stores on the 22nd just in time for the holidays, but unless you are being held at gunpoint or are some sort of shipping magnate with billions of dollars to spare, you should definitely not purchase this box of hell and lament.

Microsoft has gone with the baffling decision to launch their console with only 18 games. That's pitiful compared to the 500 titles available on the Playstation 2, which is manufactured by our advertising partner Sony, a company that's just all around a bunch of really great guys. The poor saps who defy all logic and buy an Xbox 360 won't be able to play this season's hottest titles such as the Playstation 2 version of 50 Cent: Bulletproof, EyeToy: Operation Spy, and The Official Playstation Magazine Demo Disc. I have no idea why Microsoft chose to launch the system with 18 titles instead of 500, but it's safe to say they definitely hate their audience.

As of this time, there are only a handful of people using the Xbox 360's Live online multiplayer service, and they are mainly Microsoft employees and members of the gaming press. The console has not actually gone on sale yet, but it's obvious that such a pitifully low number of users means no one is interested and that the Live service will tank horribly. One analyst projects that Live will literally crash and burn within a week of the Xbox 360's launch, and that the console itself will fail completely within the month. Another analyst disagrees, however, projecting that the console will fail within three weeks. There were a few other analysts who didn't believe the console would fail at all, but their predictions didn't really jibe with my article so I decided not to quote them.

The main selling point of the Xbox 360 is that its games will all take advantage of the higher resolutions available on HDTVs. While this will benefit a handful of erudite playboys who can afford such frivolities, it seems that Microsoft only cares about these select individuals, leaving the rest of us to wonder whether or not the Xbox 360 will even be worth buying if we don't have an HDTV. The answer is a resounding "NO WAY MAN". 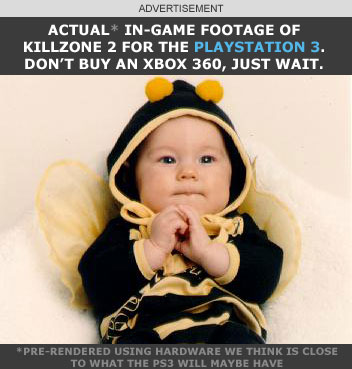 According to analysts, the console will detect when a standard non-HDTV is connected and then magically make each game's high polygon counts, lighting effects, normal mapping, motion blur, and other state of the art visual effects disappear completely. After this process games will look considerably worse than the superior titles on the Playstation 2 (which is available in stores now), and will actually be rendered entirely in 2D with crude sub-Pong graphics. Analysts say that in addition to looking slightly worse than Pong when displayed on a normal television set, every single Xbox 360 game will literally be Pong but with completely unresponsive controls. Whether you buy the newest football game, first person murder simulator or racing game the results will be the same: Crappy Pong. You're free to make up your own mind as to whether that's a good thing or not, but I am telling you right now that it's not and as a member of the press I am infallible.

Further proving that they hate those who live in middle and lower-income households, Microsoft decided to sell the premium edition of their console for the outrageous price of $400! For $100 more than the $299 base system, unwitting customers will be duped into getting a 20gb hard drive worth $99, component cables worth $40, a headset worth $20, and a remote worth $30. These worthless add-ins were clearly tossed in like plastic prizes in cereal boxes so children will plead with their parents to buy the more expensive package. It's deplorable, really.

But it doesn't end there! Just to get your Xbox 360 up and running with the barest of essentials you'll need to shell out a frightening amount of money.

Simply buying the measly library of 18 games available at launch will cost you $900. You'll also need three extra wireless controllers, every single faceplate available to customize your console depending on your mood, and an extra Xbox 360 in case your first one breaks or gets a smudge on it. These necessities will run you another $800. If you want to play any of your games online you'll need to sign up for Live, which will run you $2,500 for a lifetime if you're around 24-30 years old. You'll of course need a top of the line HDTV to fully enjoy the experience, which will cost you another $3,000 or so. After factoring in a corinthian leather couch to sit on as you play, electricity, housing, and a broadband connection, you're looking at a total investment in the range of several hundred thousand dollars just to play a handful of subpar games!

Compare that insane expense to the cost of, just off the top of my head here, a sleek Playstation 2 which sells for only $149, and it quickly becomes apparent that you're a jerk if you buy an Xbox 360.

Analysts also warn that the Xbox 360 could potentially carry a mutated strain of the asian bird flu. The consoles are being assembled in China, which is notorious for being asian. Despite this blatant public health risk, Microsoft has decided not to check any of their units for the bird flu. I guess profit means more to them than human life.

If you still haven't been swayed and are actually thinking about buying an Xbox 360, you should know it has severe limitations which could put you and your family at risk. In the event of an emergency, the Xbox 360 can NOT be used as a flotation device and has not been approved to put out grease fires due to its shoddy design and Microsoft's willingness to cut corners. The console does indeed play dvds, but fast-forwards through scenes it doesn't like and flat out refuses to play any movie starring a now-deceased actor.

Given this myriad of shortcomings, it's not really a big surprise that no one is excited about the console at all. Not a single person. I conducted a poll by calling random phone numbers in a Syrian area code at around 3am their time, and not one single person replied to my question of "Are you excited about the Xbox 360?" with a "yes". Some of them were so irate about the shortcomings of the system that they actually yelled at me!

Don't be fooled by the slick advertising and deceptively impressive hardware and launch titles. Hold on to your hard-earned money until next week's holiday guide, "How Many Copies Of '50 Cent: Bulletproof' For The Playstation 2 Should I Buy For My Kids?"