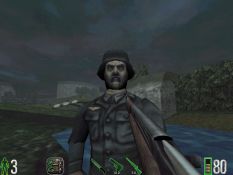 Grrrrr.Speaking of the AI (which I may or may not have been doing, I’m not really sure at this point) the German soldiers in this game were trained at the same combat school that trained the guys in Gore: Ultimate Soldier. When they spot you, instead of gunning you down like the filthy American pig that you are, they will run around looking for a hotspot to shoot from. Let me explain what I mean. Instead of simply making the enemies able to fire from anywhere, the developers decided that the enemies shouldn’t be able to shoot their weapons unless they are on top of one of the predefined invisible hotspots they scattered around the map. So if an enemy is standing in the middle of a field when you fire at him and the nearest hotspot is in the corner of the field 50 feet away, he will instantly start running to the hotspot, and he’ll only return fire if he manages to get to the hotspot alive. Yes, that’s right, they actually managed to design an AI system that is even less effective than the basic “wait until you see the player, then stand there and shoot at him” logic that is cherished and adored by crappy shooters worldwide. But I suppose that shouldn’t be surprising since, as I may have mentioned once or twice already, it’s a Valu-Soft game.

Based on the way the graphics look in this game, I am guessing they were created when the software team, angry at the programmer who coded the terrible AI by opening up Visual C++ and karate chopping the keyboard four hundred times, pinned him to a table and beat him with a programming manual until he vomited all over a nearby scanner and bled to death. Of course this was before they realized that they had gotten the wrong guy and had accidentally killed their one-man art team, so they solemnly decided to scan his vomit and use it for all the textures in order to honor his memory. A friend suggested that perhaps the graphics are bad because of untalented graphic designers, but that sounds a little far-fetched to me. 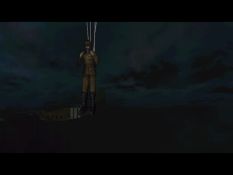 This is a shot of the riveting opening cutscene. Yeah, I know it's too dark to make out what's going on. Trust me, you aren't missing anything important.

Either way, the graphics in this game are bad enough to make your monitor grow an arm and poke out one of your eyes as a furious act of revenge, then feel bad about it and make it up to you by poking out your other eye so that you’ll never have to view graphics this horrible ever again. Since every single soldier in the game looks identical, you’d think they would have put some effort into the one skin they used, at least enough to make it look like something other than a disgruntled conscript who looks extremely pissed off after having had most of the skin on his face torn off by an angry badger. Shooting any wall or floor will result in a hilariously unconvincing spray of about four or five flat, untextured triangles that I guess were supposed to look like debris. The single skybox that they used for every level, which could loosely be described as “blue swirly stuff on top of some slightly different blue swirly stuff”, combines perfectly with the dark textures and low lighting levels to add an exciting and unique element to the gameplay: the element of not being able to see anything. You would think this kind of glaring, obvious problem would have been caught in QA but, although I hate to harp on the fact that it’s a Valu-Soft game, it’s a Valu-Soft game.

You are given a wide array of powerful things that you can either hit the enemies with or launch smaller things to hit the enemies with. You never need to actually reload the guns, because if your clip runs out you can just switch to a different weapon and switch right back and you will magically have a full clip again. Also, most of the “authentic World War 2 weaponry” resembles common household items more than anything else, such as a letter opener, a stapler, a walkie-talkie and an unusually large nail. Your attack with the knife is different from any I’ve ever seen before, mostly since a typical knife attack involves hitting the other guy with the pointy end as hard as you can, and in WW2 Normandy you slowly reach the knife forward and absentmindedly rub the area in front of you with the side of the blade. But it still somehow injures and kills the enemies, so I guess it’s all good.

I stapled and letter-opened my way through several levels, but I didn’t end up beating the game. I guess that means when the allies stormed the beach they all got gunned down by the beach turrets I didn’t disable and the German soldiers I didn’t kill. But somehow I’m okay with that, because that allowed me to stop playing the game and get to the serious business of making fun of it. If there even is a final boss, it’s probably just the same clone soldier scaled to 150% to make him more intimidating, or possibly with a mustache added to his face to make him look like Hitler. If any of you readers have actually beaten the game, let me know if there is an end boss, because I am very curious, but not curious enough to willingly subject myself to playing this game again. If you have never played this game before, I recommend you keep up that perfect track record and run away screaming in a really shrill voice if you ever see a copy of WW2 Normandy within two zip codes of you.

In conclusion, it’s a Valu-Soft game.