Anyway, this album's merits are as follows: a)It's only 31 minutes long. Music-wise, it's pretty much identical to the rest of the group's recent output (not to mention hundreds of other identical acts), with lots of "whoa-oh" group vocals, mid-tempo peppiness and zooming guitar chords. There's even a fast "hardcore" song, like punk groups who've softened their sound over the years always include, pandering to morons gullible enough to fall for the token gesture. It's all so fucking generic. If Anti-Flag weren't already such a standard-issue moniker, the group could embrace the name Punk Band and slap a stenciled logo on a stark white backdrop. It already churns out Brand-X titles such as "Equality Song" and "Protest Song."

Lyrically, Anti-Flag occasionally saves room for cliches of a non-political variety, such as when the group repeats "this is the first night of the rest of our lives" during one of those nostalgic "remember when we stayed up all night listening to the Clash and falling in love with music" songs shitty Warped Tour bands can't resist. Tony Soprano said "'remember when' is the lowest form of conversation," but I'm sure Anti-Flag can sink even lower on future releases:

Drummer Pat Thetic says "autographs separate, stick together!" Commendable words, especially given the truly piteous nature of coveting a signature that reads "Pat Thetic." But while Anti-Flag discourages some forms of hero worship, it also curates a MySpace gallery for idiots who have gotten tattoos of the group's logo and lyrics. 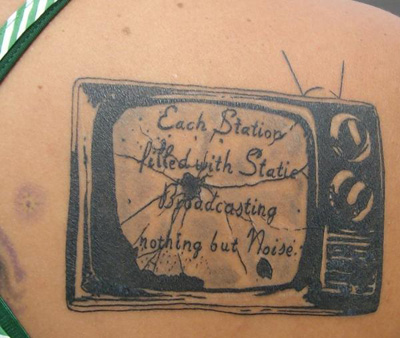 I can't even tell what fucking part of the body this is. Maybe that purple mold spore is its belly button, which would mean the design has been rendered sideways across an enormous belly. Whenever people discuss TV shows, she can skip the smug "I don't even own a television" and wow them with this radical message, after some initial awkwardness while she pauses the conversation to lay on the ground and pull up her shirt. 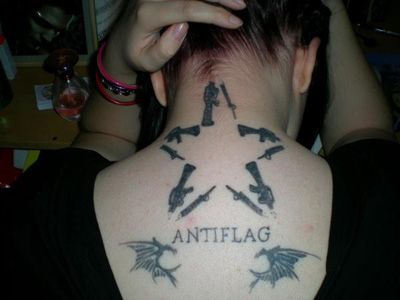 Observe the framed picture of the sparkly Twilight vampire. Someday she'll discard that particular monument to retarded fandom, but the tattoo won't be so easy to erase. With the band's name written hyphen-free and bookended by dragons, it looks like an homage to some fantasy character named "Antiflag." It's unclear whether this would be more or less embarrassing than eternally stigmatizing yourself as a fanatic devotee of horrible music. 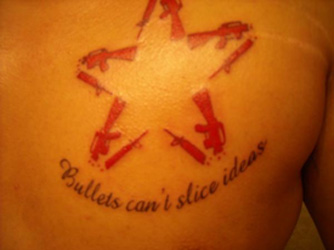 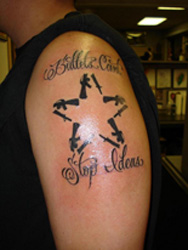 The line these clowns wanted to immortalize is: "Bullets can't silence ideas." Great job -- you took a monumentally ill-advised decision and managed to compound the wrongness by hiring someone who fucked up the execution.

Anti-Flag combines kids' music with a Kids News take on politics. It's impossible not to outgrow these guys by your twenties, unless you're facing serious intellectual stultification. Yet these people will be branded with indelible proof of their taste-impaired youth long after they start cringing at phrases like "War sucks, let's party." Maybe the abject shame will eventually inspire them to get the word "Fuck" permanently inked right in front of the band's name.