Like a cover band at a dank nightclub, I'm constantly barraged with the names of shitty songs and bands. Whereas slackwit barflies really want to hear that crap, Garbage Day readers demand to have it pilloried. Anyway, nothing ass-rapingly horrid came out this week, so I'll field a request as a goodwill gesture. 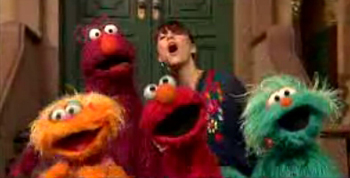 Which one is Feist?Leslie Feist seems like a nice enough person. She's organizing a non-perishable food drive during her upcoming Canadian tour, which is a pleasant charitable endeavor. Even if I were to fulfill my dream of smuggling perishable -- and in fact, quite perished -- fruits, vegetables and dairy products into her show and pelting her with them, she'd probably scrape off the excess goo and find some responsible compost-heap purpose for the pungent slime. Also, she recently spent time aboard a research vessel, alongside scientists and musicians whose names normal people wouldn't know, in order to provide inscrutable assistance to Greenland's glaciers. This sounds like it would be a reality show, and I suppose it's to her credit that it's not.

Feist probably makes a better climatologist than she does a choreographer. During the "My Moon, My Man" video, she sidesteps the traditional "standing" and "walking" designations of an airport's moving sidewalk to occupy the "dance like a doofus" lane. She doesn't sing especially well, either, though she tortures her warble with diva acrobatics until it quivers painfully. This might seem like a peculiar skill set for an alleged entertainer who charges $29-49 for tickets, but Feist displays her floppy-limbed Muppet moves and thin voice with such wanton joviality that people find her endearing for attempting to produce art despite her limitations. Rarely has a non-retarded 32-year-old earned so many adoring head-pats for creating something so unremarkable. 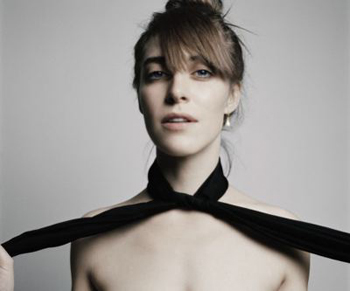 Mercifully, Feist usually tries to charm fans rather than seduce them.From her goo-goo delivery to her my-little-ponytail hairdo to her lyrics, which are the verbal equivalent of crude crayon drawings magnetized to the refrigerator, Feist caters to creepy infant fetishists, who must have soiled their diapers in delight when they heard her build a chorus around the preschool task of counting to four. Despite, or perhaps because of, pictures like the one on the right, she's perhaps the most desexualized female top-seller since her countrywoman Celine Dion. She's even topless on her album cover, in Victorian-broach silhouette, but the rainbow emanating from her neck both distracts from her nudity and forecasts the gayness within.

Feist's baby-talk persona serves as a front for lethally boring adult-contemporary music. Last year's The Reminder plays like a candy bowl spiked with sleeping pills, alternating sugar rushes ("1234") with potent lullabies ("The Park" could be an animal tranquilizer). "1234" is often known as the "iPod song," due its usage in Apple's ubiquitous ads. Anyone who blithely adds this tune to their iPods despite its status as a commercial jingle for that very product deserves to have his or her device destroyed, as does anyone who purchased a Nano specifically because they were lured with the promise of being able to watch miniaturized Feist videos. 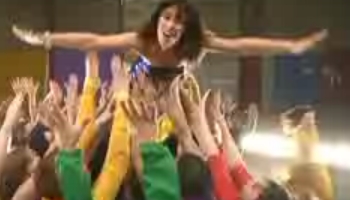 Look, lady, you shouldn't crowd surf face-first, because -- oh, never mind, it's Feist.People who didn't become acquainted with Feist through the iPod marketing campaign probably already knew her from the psychedelic group Broken Social Scene. Some people feel her involvement in this decent outfit gives her inexhaustible credibility. But Broken Social Scene is a sprawling collective that counts pretty much everyone in Canada in its membership, including Bryan Adams, Steve Nash and John Candy's corpse. And, Feist is to Broken Social Scene what Cappadonna is to the Wu-Tang Clan -- a lyrically inept fringe contributor.

The goofy phrases that escape Feist's mouth aren't always her fault, given her enthusiasm for covers (2004's aptly titled Let It Die contained a brutal Bee Gees remake) and songwriting collaborators. For example, "1234" isn't even hers: It's written by Sally Seltmann, who diplomatically applauds how Feist takes a profound downer and made it "more upbeat and energetic" by marching some sort of pride parade through the tune's third act. 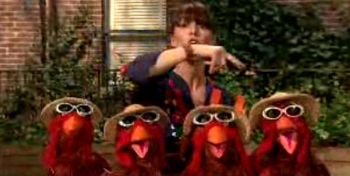 Feist 'jams' with her old group Broken Social Scene.It's difficult to decipher these howlers during the first listen, though not because the muffled instruments are providing any interference. Yet while most of the compositions are as skeletal as Feist's own frame, she still finds space for annoying elements such as blaring horns, hand claps and even a choir. It's like a series of poisoned meals, served in frustratingly small portions. Anyway, Feist's breathy mumbling obscures some of her inanities and creates unintentional hilarity, like the "1234" lyric often misheard as "four teenage hos arrive at your door." Left to their own devices, Feist fans have used scattered clues and cunning intellect to conclude "My Moon, My Man" is all about anal sex and menstrual cycles.

I understand why readers selected Feist as their least favorite musical figure, despite her eager-puppy likability. She's a grown, intelligent (lyrics notwithstanding) woman who communicates in a cloying childlike fashion, and she's posited as an 'alternative star' when her music should rightfully belong to car-pooling parents, sensitive coffee shop nomads and "hip" waiting rooms. Maybe the readers tried, really tried, to enjoy Feist, only to find that it's hard to embrace someone roughly your age who's figuratively hitting on your mom and your kid brother simultaneously.