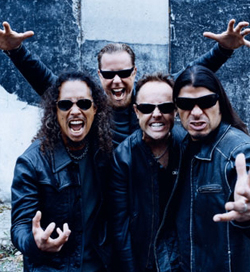 Their eyes glow red behind those sunglasses.I'm a fan of the Kansas City Royals, an organization that last experienced a successful season back in 1985. Despite years of watching incredulously as players turned simple plays into slapstick pratfalls, I still follow their games, and I think of the team in a generally positive light. This is because they haven't fundamentally altered their identity or goals. They attempt to win baseball games, and they even manage to do so, once or twice a week.

In order for them to appear as traitorous as Metallica, thus earning my unwavering enmity, they'd have to completely abandon the framework in which I first appreciated them. For example, if the Royals players started wearing eyeliner instead of eye-black, suing everyone who watched the games on TV instead of purchasing tickets, inflicting Limp Bizkit and Linkin Park on paying fans as nightly "opening acts," and playing golf instead of baseball, I'm sure I would view the Royals as most of the country does, as an entity that should be ignored when it's not serving as a pitiable punchline.

To clarify the specifications of this analogy, the Royals play baseball, under the broader category "sports." Metallica, when listenable, plays metal, under the umbrella term "music." If Metallica had stuck to metal while getting half-assed ideas and lyrical retardation out of its system, no one would be saying "fuck these guys." Slayer fans admit 2006's Christ Illusion wasn't the group's finest record, or they would if they weren't programmed to respond "EVERY SLAYER ALBUM IS TIED FOR BEST ALBUM EVER! SLAY-FUCKING-ER!" Christ Illusion isn't innovative, but it's not embarrassing, and it's not treasonous. At worst, it's a poor man's Reign in Blood. Metallica fans would've killed for a poor man's Master of Puppets during the past decade; in fact, now that they've received exactly that in Death Magnetic, they'll surely celebrate to a degree unwarranted by the album's actual merits. Perhaps all this bullshit was just an elaborate "Prodigal Son" set-up to inspire fans to kill the fatted calf over a mediocre release. 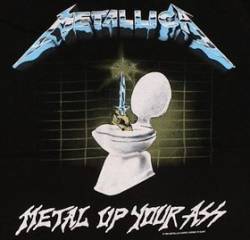 Fans don't mind being sodomized by Metallica, as long as the band uses metal.Artists occasionally experiment with different approaches during the course of long careers, but Metallica had its genre's name indelibly tattooed to its moniker. Without "metal," there's just "Lica," a 30-year-old woman from the Netherlands whose favorite type of music ("gut-bucket rock 'n' roll with fat choruses") sounds suspiciously like Load and Reload.

In a column about Weezer's pathetic decline, I compared its fanbase to a battered wife. Metallica's remaining unconditional supporters are even more insanely resilient, like a straight girl sticking with her boyfriend after he sex-changed into a woman. Sane listeners understandably gave castrated post-op transsexual Metallica the boot. Now he/she/it's back, claiming to have experienced a change of heart and sporting surgically restored genitalia, but it's hard not to be haunted by the specter of its phantom vagina, especially when it's right there on the goddamn album cover.

Some argue that Metallica "evolved," displaying the kind of comprehension of Darwin's theories one might expect from a fanbase deeply rooted in "intelligent design" states. Metallica actually devolved several species, until it found itself grunting its way through primordial hard rock like some sort of proto-Neanderthal. 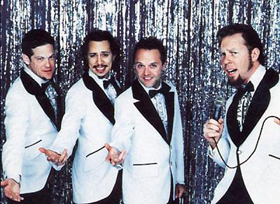 The 'Reload' era: Even gayer than you remember.Anyway, Metallica's back now, kinda. The drums sound like drums, and the guitar solos actually exist: Only in the wake of St. Anger would it be necessary to make those assurances. "All Nightmare Long" cedes the microphone to Lionel Richie, who recounts his harrowing spousal abuse at the hands of his estranged wife while the band plays a chugging version of his similarly named tune. Or, it's an intensely thrashy original composition. You'll just have to buy the album to find out: Metallica doesn't want you using the Internet, and they don't want me spoiling the surprise. Remember when Metallica songs came wrapped in intriguing sashes such as "Trapped Under Ice" or "The Call of Ktulu"? "All Nightmare Long" sounds like a Halloween-themed Gossip Girl episode. 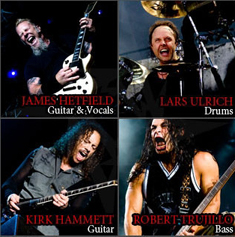 Never trust an open-mouthed band.On the downside, "The Judas Kiss" compounds its criminally boring riffs with lines like "bow down/sell your soul to me" and "I've become your new god." A traitorous group should really display more humility, especially during sensitive moments for the betrayed, such as when they're listening to a song with "Judas" in the title.

Metallica devotes ten minutes to the interminable instrumental "Suicide and Redemption," which fails to provide the latter while making listeners ponder the former. This mundane trudge just feels like a makeshift receptacle for all the guitar solos orphaned during the St. Anger sessions. Also, it closes with a fade, adding a terrifying "to be continued" ellipses to this overlong debacle.

Speaking of sequels, Death Magnetic contains "The Unforgiven III." Hetfield sings of a man "pulled off course by the light of golden treasure," a loaded phrase from the most widely alleged sellout in the history of Internet accusations. The group started obsessing over forgiveness back in 1991, which, perhaps not coincidentally, is about the time they first needed mercy from die-hard headbangers. Maybe Metallica wants some kind of official pardon before ending its "Unforgiven" series, but unfortunately it doesn't yet deserve a full reprieve.