I don't consider ludicrous attire to be a deal breaker when selecting bands, or else I wouldn't listen to so much goddamn black metal. If anything, I appreciate it when untalented musicians provide a colorful distraction from the painful drudgery of their incompetent compositions. So while it might seem like I'm giving September's Compactor selections a hard time for looking like drag-queen aerobic instructors, just know that I would've been much angrier to have endured their horrific albums without the comic relief. 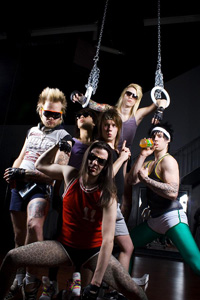 Lord, have mercy.Like August's Compactor disgrace Family Force 5, Blessed by a Broken Heart doesn't understand that being a Christian band that attempts to play heavy music provides sufficient novelty and comic pathos, without such overkill elements as ironic lyrics, wacky genre-hopping and ridiculous costumes. BBABH used to play generic breakdown-core, until the exodus of almost all its original members. (When your lone holdover is a drummer who answers to Frank "Da Bird," you should probably just start a new group from scratch.) The resurrected incarnation looks and sounds a lot like Stryper, with neon leggings, constant keyboards and aerosol-spraying solos. Blessed by a Broken Heart shouts slogans such as "feel the burn," unaware that wearing Spandex makes them hair-metal fags, not personal trainers.

In a press release touting Pedal to the Metal, Century Media tries valiantly to posit Blessed by a Broken Heart as the heroic purveyors of long-vanquished joy instead of a simultaneous embarrassment to religion and rock. This "fun-loving, carefree and energetic" group creates "summer party anthems" that make you "think about the happy times, past and present." Furthermore, "this is fun music for fun people, so crack a beer and crank it up, because school's out and it's time to party." "Feel good rock and roll has been absent for some time," you see, and "the band encompasses pure rock 'n' roll excess," so "be sure to get your party pants out." Aside from the fact that no one normal owns "party pants," all this publicity blather propagates the insulting notion that people who don't enjoy moronic rallying cries such as "Move Your Body" and "Doing It" just need to lighten up, man. 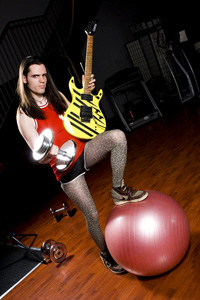 Push harder, go past the max, reach over the top, master your ass!Because Blessed by a Broken Heart is Christian, "Doing It" is not a sleazy song about fucking. Instead, it's an insipid tune about rock, the second stupidest topic in music. "Doing it for the rock," they chant before harmonizing gaily like an emo glee club. Tracks such as "She Wolf" and "She's Dangerous" reveal a pathological fear of sex, the sort of thing that festers due to faith-mandated abstinence. At one point, Blessed by a Broken Heart asks "If God is for us, who can be against us?" But much like football players who drastically overestimate The Lord's rooting interests in their athletic performances, Blessed by a Broken Heart is overstating God's allegiance with their horrific musical endeavors.

I'd never heard of Semi Precious Weapons until I spotted the distinctly unpromising CD cover starring some fruitcake with fishnet over his eyes. I decided to pick it up unheard as a worst-of-the-month contender, and -- by that criterion only -- it didn't disappoint. Semi Precious Weapons shows a special talent for losing listeners with the very first line of its songs, as this sampling from its opening four tracks indicates: 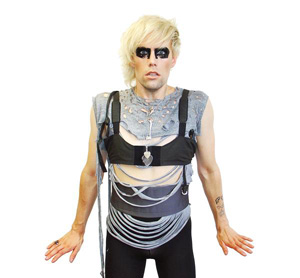 Drag queens usually do a better job of clearing the stubble.Womanish singer Justin Tranter delivers these lines with a sassy sickliness, like he's taunting disease from his deathbed, while his backing band sweeps the dusty glitter off 30-year-old garage-glam riffs. This retro-fetishistic trash comes wrapped in several layers of critic-proof coating. For example, the album sounds like shit, but that's ostensibly due to the band's "raw" aesthetic. Also, hometown fans snootily assert that people outside of cosmopolitan Brooklyn only hate Semi Precious Weapons because they're narrow-minded homophobes threatened by Tranter's gender-bending antics. Actually, it's because nobody outside the Big Apple gives a fuck about New York Dolls retreads. At one point, Tranter croaks "they'll love us when I die." Well, honey, there's only one way to find out.