Hate Is A Strong Word

Over the past couple years, hundreds, maybe thousands of inexplicable Plain White T's enthusiasts purchased shirts emblazoned with the phrase "I Am Delilah," representing themselves as the intended targets of the lethal sap-tipped arrow "Hey There, Delilah." When these fans start puberty, or have a near-deafness experience that makes them treasure their hearing and reevaluate their terrible listening habits, or encounter some other catalyst that inspires them to pursue a new non-moronic lifestyle, they'll be mortified that they ever enjoyed this gloppy serenade, let alone that they wrongfully posed as its recipient. 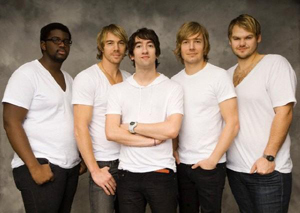 Creativity abounds with Plain White T's.The Plain White T's new album Big Bad World contains a monstrously embarrassing "Hey There, Delilah" rehash called "1,2,3,4." Singer Tom Higgenson rhymes "sad," "bad," "mad" and "glad" in quick succession, like a 7-year-old crayon-scribbling a Mother's Day card, then uncorks this chorus: "There's only ONE thing/TWO do/THREE words/FOUR you/I love you." The only thing worse than seeing those words number-spelled on the lyric sheet is imagining the stupid holding-up-fingers dance the band's little-girl following will perform. The PWT's understand their fans' mental limitations, which is why the finger counting is confined to one hand.

Unlike the brainwashed swooners in the audience, the real "Delilah" didn't fall for Higgenson's cloying rhymes, remaining uninterested in his advances until she finally agreed to tag along with him to the Grammys. Perhaps dismayed that this unflattering story has become public knowledge, Higgenson seems obsessed with establishing he's now desirable to women. "She said she saw me on TV/She just wouldn't take her eyes off me," he brags during the deplorable single "Natural Disaster." "I met a girl and it was easy to see/that she was falling hard for me," he claims during another song. Perhaps he's being truthful about his newfound ladykiller status: I initially suspected Pinocchio Syndrome, but it turns out he's always looked like that. Regardless, nothing kills an endearing-dork persona quite like hearing the alleged underdog boast about his exploits. Also, no one's going to buy a shirt bearing the slogan "I Am That Club Skank from 'Natural Disaster.'" 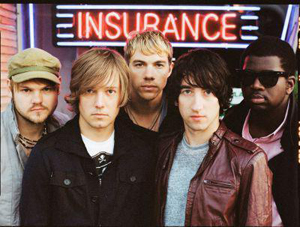 Smartly, the Plain White T's purchased a policy that covers one-hit-wonder obscurity.During "That Girl," Higgenson explains what happens when one of these smitten admirers invites him inside for a nightcap: "I'm singing/Do do do you wanna be on top/or on the ba-ba bottom/don't make me stop/Cause I know oh oh/I'm in la la love with you girl/I can't stop singing." It goes on like that -- this guy must be the most annoying fuck in groupie history. It's easy to imagine him excitedly blurting out these nonsense noises while bouncing on the bed with a teddy bear like that retarded girl Charlize Theron played in Arrested Development.

But Plain White T's have bigger goals than sexual conquest -- the biggest, broadest goals possible, actually. "Someday we'll all be together/what if we all could just agree/To live together in the world/In perfect harmony," Higgenson asks. It's amazing that no one's ever thought to ask these probing questions before, except everyone who ever participated in a schlocky "all-star charity record," and the people who made this ultra-gay Coke commercial, and countless fruitcake coffeehouse folk singers. The Plain White T's apparently take "perfect harmony" literally, given that they frequently group-croon lines like the thinly veiled boy band they are.

When they're not playing anonymous 'N Sync pantywaists to Higgenson's Justin Timberlake, the Plain White T's backing vocalists contribute pinched falsetto echoes, annoying "cha" noises ripped off from Miley Cyrus, basically anything to assist the shittening process. Higgenson's ruinous presence can't be overstated, from his flamboyant handclaps to his harmonica blowing to the maudlin faggotry of his goddamn lyrics ("In my heart, the rain is pouring/down endlessly/The sky is gray/just like me"). The group adds horns to a few songs, because nothing helps an already unlistenable song plunge shards into ear canals quite like well-placed brass toots. 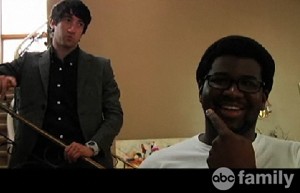 Plain White T's drummer: 'Get a load of our cockbag singer!'Like most fraudulent pseudo-celebrities, the Plain White T's star in a reality show. Titled Meet Me In California, it's especially -- and perhaps exclusively -- useful to people like me, who are attempting to gather all possible instances of the band's ineptitude. I'd already gathered damning evidence of Higgenson's musical dicklessness by enduring Big Bad World, but I hadn't yet considered the possibility that his personality could be equally appalling. Higgenson babbles about basking in fame, then plays air guitar while wearing sunglasses indoors. He shamelessly refers to the only T's song anyone will ever know ("Pay the bills with the guitar, like I say in 'Delilah') during interviews. And he blows off rehearsals to attend parties, leading to this exchange:
Drummer: What's more important, the party or the record?
Higgenson: I don't know, man.

After 25 days of uninteresting debauchery and Higgenson douchebaggery, the band's frustrated label rep compares them to "a fucking kite going up in the air." (I'm pretty sure no decent group has ever been likened to a kite, for any reason.) In response, the band begrudgingly throws together some songs at the last minute. This depiction of a haphazard, procrastinated creative process isn't too surprising, given the crappiness of the finished product. Look for discarded 'Delilah' shirts to start cluttering landfills.