One of the videos Sgt. D and I suffered through in this week's crap exchange was BANNED! If only they all were. 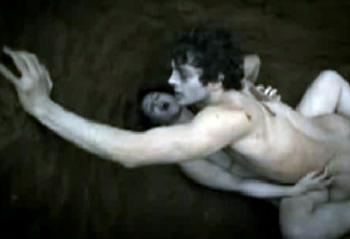 At first I thought this shitty band had gone from douchey, Pantera-bearded nu-metal to dull, generic deathcore, but the opening blast beat was just a brief detour. After that, it's back to business as usual: playing painfully anachronistic Ozzfest-style "hard rock" that would make even Coal Chamber and DOPE cringe with vicarious embarrassment.

Apparently this video was banned by unnamed "networks and media sources" for "explicit imagery,"* but I can't imagine why. In a post-Pain Olympics world, it should take a lot more than a couple almost-naked corpses mock-humping in a fake grave or some needles-and-stitches torture straight out of that Dee Snider horror movie to shock people. Then again, it's certainly offensive in its own way. Not so much in an "OMG U CAN'T DO THAT" way, more of a "revoltingly bad art" kind of thing, in that it's a mishmash of arbitrary unpleasant visuals that reminds me of a freshman photo class where everyone tries to be "edgy." Or a Jake Bannon album cover (yeah, it's THAT bad).

* "Strange and Beautiful" now appears exclusively on vampirefreaks.com, because it's "too graphic for any other site." Hahahaha. 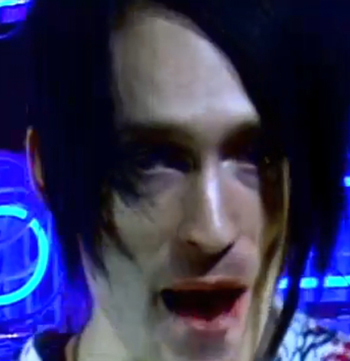 Oh great, more fake scene music from another gross old dude. I've honestly never heard of this asshole before this week -- this video has almost a million plays, who the fuck are these people watching it? -- but our sister site got me up to speed. Apparently he's a 30-year-old computer programmer who moonlights as an effete joke singer to impress braindead underage girls. It's a clever enough ruse, except as Sgt. D points out, he looks like the kind of guy who would get sprung on some 19-year-old and become that 30-year-old who gets his heart broken by a teenager.

I wonder how these ironic performers relate to their unironic groupies. I mean, they summon their darkest creative impulses to exaggerate the worst aspects of music's most intellectually bankrupt genre, then they meet people who take their songs at face value -- and love them anyway. They must think everyone who likes them is stupid and misguided, but they overlook this in cases where the idiot is especially attractive. Regular people call this "dating."

I guess this song "succeeds" at taking something inherently ridiculous and somehow stretching it to a new level of inanity, all while reaping benefits exclusively from the scene being mocked. Congratulations on reaching the lowest musical depths ever excavated, and also on whatever spell you cast to make high-school girls ramble about how you're "rlly cute <3" even though you look like an ancient witch who's running dangerously low on anti-aging potion.

Like fellow minstrels Teen Hearts, "J Bigga" appropriates hip-hop slang and gesticulations (look out for the hilarious "thug life nigga cuz we ride or die" at 1:18), despite the fact that rap isn't even the genre he's ostensibly mocking. Sneaking smug mockery of black culture into a self-serving appropriation of scene-kid pop constitutes one of the most cowardly gestures in the history of Internet novelty acts, and of music as a whole, and, indeed, the human race.

tl; dr: Creepy old Willy Wonka attempts to lure little girls with AutoTune siren song about puppies in his heart. Please forward this video to anyone who's unaware of the whole ironic-sucking craze; their rage will be pure and potent! -GD

Raven Charter makes me think of those kids who can draw incredibly well, but go into car design or "concept art": so much talent squandered in pursuit of something completely fucking stupid. Much like the losers who toil away for hours crafting beautifully rendered trolls, spaceships, and convertibles, these misguided, awkward dorks can clearly play their instruments, but they inexplicably chose to create the perfect vagina repellent: prog metal with a sci-fi video.

My first reaction to this video was "What kind of music is this?!" but not in a good way like when I heard Andrew WK for the first time; more like "How could these dudes be into such a wide variety of wretched bands??" The questions kept coming: Why is the singer wearing Ultimate Warrior-style bicep bands, and the drummer -- only the drummer -- wearing a gas mask? Are chintzy LTD guitars cool for cybergoths? Is the ending supposed to be some kind of shocking twist, or did they just run out of After Effects presets to masturbate over? We might never know the answers, but I do know that disabling comments on your video constitutes the opposite of a vote of self-confidence. -- Sgt. D