Whenever I experience a paranoid delusion that the next month won't produce enough mockable fodder, I inevitably discover something repellent enough to restore my faith in a future populated in perpetuity by musical nonentities. August produced one astronomically horrible album, some minor annoyances and a curiosity, so when I'm finished with the primary offender, I'll set the blades on liquefy for efficiency's sake. 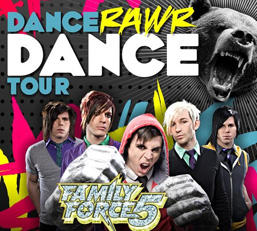 Dance! Get it? DANCE!Family Force 5 stirs nu metal, emo, R&B, crunk and disco into a simmering cauldron, producing the most noxious fumes ever to waft through a speaker's ventilation holes. Given the improbability that any sentient being would independently decide to mix these ingredients, I'm convinced FF5's members are androids (their robotic processed vocals only reinforce this hypothesis), and that the group was diabolically manufactured as an experiment to test the populace's pain threshold.

FF5 once favored a heavier sound, back when it sounded like Marilyn Manson, with all laughable attempts at "evil" replaced by laborious stabs at "cleverness." FF5 has mutated into a dance band, and it repeatedly reminds listeners of this transformation in its lyrics. Five of the eleven tracks contain the word "dance," usually in sickening constructions such as "I'm here to battle, baby, i dance to kill." Of the other songs, two are weirdly earnest boy-band power ballads, and the rest contain lines like:

God, no.FF5 praises Jesus during its stage banter and ends its concerts with a prayer, but its lyrics don't communicate the group's spiritual leanings. The only phrases that involve religious iconography are "Just let it burn me up for heaven's sake" and "who died and made you God." Unfortunately, FF5 doesn't replace preachiness with anything remotely interesting. Even Christian "inspirational anthem" artists come up with more tolerable choruses. I'd rather hear an unintentionally hilarious refrain like "our God is an awesome God" than some sassy-hipster nonsense like "you just committed your last party foul."

FF5 offers the option Dance or Die. Given how unappealing the band makes dancing seem, listeners might choose death, though it's unclear if FF5 martyrs inherit Heaven's bounty.

When judged purely on musical merits, Blues Traveler's North Hollywood Shootout ranks as August's worst release. However, even though this wretched collection contains lethal doses of white-dude jam funk, and horrifying (especially coming from surgically deflated former lipoid John Popper) lyrics like "her belly button fascinates me," and a fucking six-minute spoken-word ramble performed by Bruce Willis, it didn't assault me with harmonica bleats during my cursory skim. I begrudgingly salute Blues Traveler for discovering fresh ways to repulse me instead of lazily relying on the old "fat dude blowing on his obnoxious toy" gag. 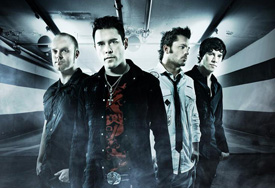 Trapt launched its own social-networking site, and I signed up for an account just to bring you the "hotttness."Trapt released an album called Only Through The Pain earlier this month, and its fans weren't happy. You'd think that anything Trapt supporters dislike might actually be good, given that the stuff they enjoy is clearly crap, but in this case it just means the new material fails to meet even their unfathomably forgiving standards. Only Through The Pain "sounds like 3 Doors Down or Nickelback," sniffs an Amazon reviewer, lamenting how far Trapt has fallen on the generic-music shit heap. Perhaps to prove they hadn't sunk to the floor of Raw Sewage Ocean, Trapt embarked on a trek with music lepers such as Buckcherry and Papa Roach. But those groups play bastardized hard rock, while Trapt stocks Pain with pathetic girl-problem ballads. This tour really characterized Trapt's members as gigantic pussies. 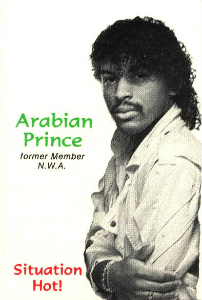 Arabian Prince deserves the FF5 singer's nickname: "Soul Glo Activatur."N.W.A.'s Straight Outta Compton redefined rap, bringing graphic violence and "Fuck Tha Police" rebellion to a party genre, but it ended with "Something 2 Dance 2," an electro-disco showcase for fringe member Arabian Prince, who doesn't appear on the rest of the record. It was like a bloody gangster movie cutting to a glowstick rave during the closing credits. Many conversations back in 1988 began with the ice-breaker "what the fuck is the deal with that N.W.A. techno song?" After leaving N.W.A.., Arabian Prince created beats for the joke-rap group Bobby Jimmy and the Critters, which is like someone quitting Morbid Angel to join the cast of MADtv. He released three solo albums, including an embarrassing attempt to mimic his old posse's profane formula (1993's Where's My Bytches?) The just-released Innovative Life documents Prince's valiant electro-rap efforts from 1984-1989. To quote one of his own lyrics, the rapping "gets even more monotonous than a nursery rhyme," but the album's fairly amusing, especially "Let's Hit The Beach," with its seagull-mimicking synthesizers. I'm including Arabian Prince only as a Nas-style "Where Are They Now?" tribute to the man behind the most mysteriously incongruous track in hip-hop history. 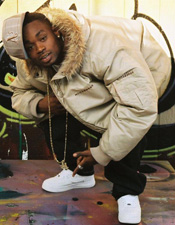 It's hard to hear someone's tummy through a coat this thick.Finally, a rapper named Beeda Weeda built a song around the chant "You don't hear my tummy/I gets my money." To translate, his stomach doesn't growl, because he's rich and thus sufficiently fed, though perhaps not so much as weighty corpses Notorious B.I.G. and Big Pun. Again, he answers to Beeda Weeda, so maybe he's so secure in his thuggish credibility that he doesn't mind a little baby talk here and there, but I can't imagine the word "tummy" slipping naturally out of a mouth fitted with gold fronts. Even Bart Simpson, who doesn't run with the roughest crowd, adjusted his phrasing to "stomach, gut, crap factory" to avoid being pummeled. I can think of a couple previous uses of "tummy" in rap songs, both of which were more genre-appropriate:

Ice Cube: "What I need to do is kick the bitch in the tummy." Context: Ice Cube is displeased about an unplanned pregnancy, and is considering how to proceed. He also rummages through the closet, "looking for the hanger." When a paternity test reveals the baby isn't his, he considers murdering the false accuser, but ultimately escapes the ordeal without killing any women or fetuses. He currently stars in children's films.

Eminem: (in high-pitched teacher's voice) "I thought you said it was your tummy." (Speaking in a child's voice) "Oh, I mean it is, but I also got a bum knee." Context: An eighth-grade incarnation of Eminem feigns various ailments to avoid an after-school confrontation with a bully, who he names as DeAngelo Bailey. Bailey sued for defamation after the song's release, but Judge Deborah Servitto dismissed his case in a rapped ruling that read in part ""The lyrics are stories no one would take as fact/ They're an exaggeration of a childish act/Any reasonable person could clearly see/that the lyrics could only be hyperbole." Servitto has yet to release a follow-up.