Post-Racial Rap - Is It Finally Here?

As a lot of you know, I'm a rap fan who also happens to be white, so the racial dynamic of rap has always been a big issue to me. For a long time, it felt like it wasn't okay to be a Caucasian that enjoys hard beats and harder rhymes.

Sometimes, I get strange looks on the bus when I'm just minding my own business and rapping along to a Snoop Dogg song on my iPod. Sometimes, I'll be wearing my No Limit ball cap and my "I AM HIP HOP" T-shirt to Applebee's and my wife will get really upset because people will be pointing and snickering like they've never seen a rap fan with a mustache before. Sometimes, the people at work come by my desk with their hats on sideways and say "What's Up, G!" and then Todd does this ridiculous 'b-boy stance' where he crosses his arms and tilts his head a little bit. Then, nine times out of ten, he knocks one of my Spawn figurines off of my desk and laughs like that kid from The Simpsons. But stuff like that's always been par for the course. I'm a proud rap fan so I know the power of the music is worth the ridicule. 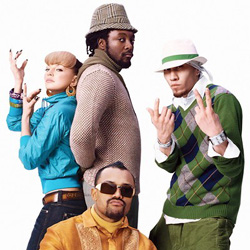 This year, however, it began to seem like the Age of Obama had taken root in rap as rappers of all colors and nationalities made their mark in the bright stage lights all over the country. From rappers of mixed ethnicity like Drake, to foreign rappers like the guy from Black Eyed Peas, to the continued dominance of Eminem and Asher Roth, it's becoming more and more clear that rap is open to anybody with a love for a hard beat and something to say. Let's hope this trend continues, and with any luck, perhaps in 2011 we will see our first Asian rapper!

Wow. This was definitely a great year for 'Ye Tudda,' as you couldn't turn on MTV or the radio without hearing a Kanye song, or at least hearing somebody complain about one! Never before has a rapper faced such insurmountable odds, as it seemed like the lead-up to the release of his latest CD consisted of nothing but the worst kind of player-hating. Every Internet comment board and message forum was blowing up for months as haters emerged from the woodwork to offer personal guarantees that Ye's album would be "disappointing," "overblown," and would "suck a million dilz in hell." Soon, even legitimate critics jumped into the frenzy, as our local newspaper (The Mobile Press-Register) published an article comparing Kanye unfavorably to his arch-nemesis Taylor Swift.

Kanye would prove the doubters wrong, of course, with an amazing album of hard beats and rhymes laid on top of a sensual background of European string synthesizers and icy-cold drums that sound like they're broadcast directly from the heart of a room covered in ice. "Kanye's Beautiful Dark Twisted Fantasy" received the highest Metacritic rating ever for a music album, which definitely earned large bonuses for both the performer and the audio staff who did the actual recording. 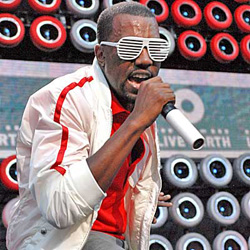 Kanye West knows he is a visionary, and he isn't afraid to push the boundaries of rap by adding in real art.

After the huge flood of critical acclaim that poured all over the place like the waterfall in a TLC video, the jealous haters could do nothing but eat their words. Kanye West proves time and time again that a rapper can be a real artist, and also be just as dangerous and exciting to watch as Steven Tyler or Slash. To conclude the year of 2010, Kanye shocked and amazed the world of fine art with a captivating performance at Saturday Night Live that I didn't actually see but I heard was really great, and maybe had naked ladies on it. Take that, Mobile Press-Register!

Do You Believe in Miracles?

Early this year, a well-known cult rap band stumbled into the mainstream spotlight as Detroit circus-rappers The Insane Clown Posse hit the big-time with their amazing comedy video "Miracles." I'll admit to not knowing a lot about these two pranksters prior to the explosion of attention they received for this video, which features two men with their faces painted, feeding a pelican and rapping about science. So I did some research into their extensive history as an independent rap band that toured the Midwest for years, getting by only on their smarts and their ability to entertain children for money between shows, at rest stops and what-not. 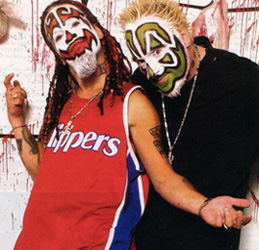 Needless to say, I was immediately won over by the antics of these rapping clowns... not to mention their hard rhymes. The Internet took notice of the Clowns as well, as the video quickly went 'viral' on the Facebook pages of rap fans everywhere. Some people seemed to be hating more than appreciating, but these "insane" yet lovable underdogs soon had the last laugh as their routine burned up the television airwaves on Saturday Night Live, proving once and for all that rap can be whatever you want it to be... even if it's about clowns.

B-girl Beauties of the Beat!

This year, a new crop of female rappers arose from the ashes of Missy Elliot like a phoenix, burning through the hearts and minds of America like a fiery sword wielded by a gorgeous elven princess. And while these luscious ladies may have the classical rap skills to rival any dude, they're exploding on the set with a style all their own. 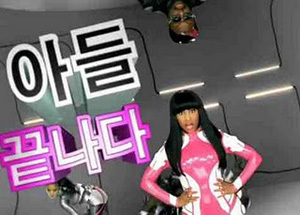 Don't confuse her with Li'l Kim, Nicki Minaj is a lady all her own.

Nicki Minaj turned heads by rapping like a woman possessed during her guest verse on Kanye West's smash-hit "Monster." She sports the sexy yet futuristic image of an urban anime character.

Janelle Monae is the female Andre 3000, and she backs up her intricate songs with lyrics that paint pictures of a dark urban future where rap music is illegal.

Ke$ha is a young white female rapper who is incredibly sexy and outrageous as she kicks hard raps about partying with Diddy and drinking Jack Daniel's.

And of course, you can't forget the ladies who continued to make waves in 2010 -- like Fergie, who encouraged us to all raise a glass and mazel tov, and Rhianna, who overcame adversity and a domestic dispute to release one of the greatest albums by a lady this year. Rhianna's CD title "Loud" is both a perfect description of her aggressive vocal stylings and a great set of instructions for what YOU should do when you pop the disc in your car stereo. You should turn it up... Loud.

Probably the biggest event in MY year in music was the formation of my awesome new rap band Raptimus Prime. With a unique and ground-breaking fusion of heavy rock and rap, Raptimus Prime has been thrilling several audiences in the local scene with our schizophrenic stage shows and deep, meaningful lyrics.

I am the lead singer of the group, which means that I am finally living out my dream of being a rapper, but at the same time, we are challenging boundaries and bringing audiences together by taking two totally different musical styles and fusing them into one hard-hitting and mind-altering blend. Fans of hard rock music AND fans of hard-ass beats and rhymes will definitely want to "get into the pit" at a Raptimus Prime concert, where there's something for everybody of all ages. The pits are not very dangerous because we have our huge friend Rob wear a shirt that says "SECURITY" and he keeps things on the up-and-up and safe for all involved.

Although the band is still new, we've finished recording one song on our guitar player's Pro-Tools setup, and it's a great track that is getting an incredible response from rap and rock fans alike. We spent months writing and perfecting this tune before unleashing it on the world, and now that we have, we're just waiting for that one phone call that will change our lives. I think the world's ready, but who knows? Either way, it's all about the love of the music, so don't worry. Randy's gonna be yapping your ear off for a while... even if I'm a famous rap/rocker!

Anyway, the song is called "(Are You Ready For Some) Rock and Rap" and it's a great introduction to the Raptimus Prime story and our earth-shattering sound. So check it out!

Raptimus Prime, "(Are You Ready For Some) Rock and Rap"

Well, folks, that does it - I'm about out of things to say for today. Thinking back on 2010 has been a lot of fun, but it's up to all of us as fans of rap music to make sure that 2011 is even better. Write a fan letter to your favorite rapper, or comment on their YouTube videos just to say "good job." Find a rapper you like on Twitter, then send them a compliment or two, just to let them know they are appreciated. Better yet, record your own raps, or join in on a freestyle session with strangers and make new rap friends. Make a beat, or make a blog, or just rap along with your favorite songs in the car. Rap is all around us, waiting to be discovered, so grab your backpack and hit the streets. It's a big world full of rapportunities, so get out there and "GO HARD!"

You can read a lot more about Raptimus Prime at my own little site Randy's Rap Report. Feel free to dig around there a bit and see if you find anything else you like. But I'll be right back here at Something Awful next month, with more of my takes on the hottest news, reviews, and attitudes in the world of rap music -- from 2011 'til infinity!