Stuff You Will Hate: Best of '09 Exchange!

A deranged hunchback stalks a scene kid in this b&w chiller.

GD: The Millionaires appear in this video, which provides some entertainment value, derived almost entirely from seeing brainless YouTube commenters flail at keys while attempting to put all those letters in the right order. (Recent attempts include "milloners" and "millinoairs.") Their cameo bummed me out, not that I give a shit about them one way or the other, but their presence confirmed that the rest of the video must be a knowing joke, and it showed such promise as a sincere failure. The black-and-white clip seemed laughably serious, like the Antichrist intro, which made the death of a child hilarious.

Eventually, Breathe Carolina engages in a wacky paint fight with the Millionaires, which recalls an earlier SYWH-featured video from YACHT, which in turn paid homage to this Devo song as featured in the film Tapeheads. Also, it reminded me of a stupid viral cell phone ad someone submitted as an Awful Link. I became so immersed in unraveling all the layers of unoriginality that I forgot that there was music in the background, which was for the best. 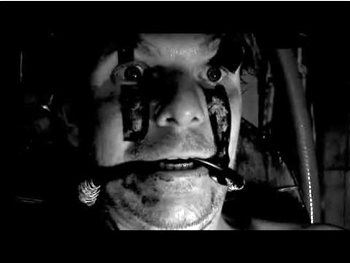 How I got Sgt. D to sit through a Converge video.

Sgt. D: Just to let you guys know I'm not some clueless new jack, I'll admit that I saw this band in 1994. Back then, Converge eked out a meager living by playing tiny, shitty venues full of obnoxious nerds. The only thing that's changed is that now legions of equally obnoxious critics fawn over their every move.

"Listen to how INTENSE and COMPLICATED they are," gush the bloggers and tubby, 30+ outcasts who write for irrelevant hipster metal magazines. "They have 1 zillion riffs in every song, and none of them relate to each other in any way. I feel like they just pulled a handful of atonal, unlistenable riffs out of their sweatshirt hoods and smashed them together -- brilliant!! They are truly pushing the boundaries of convention! Oh, and without Converge the world might never have been blessed with Underoath and The Devil Wears Prada. This band must surely be considered the Beatles of third-rate, redundant, exhaustingly dull metalcore!"

Aside from inspiring countless awful bands to ape Converge's grating musical shtick, you can also blame Jake Bannon for more than a decade of hackneyed, amateurish metalcore record covers, T-shirts, and other eyesores. This video exemplifies his aesthetic sensibility: combine a bunch of arbitrary, "edgy" images in a senseless, poorly considered composition, put some vague-yet-"deep" phrase over it like "Axe To Fall," and voila: instant medio-core!

As wretched as this band is, their fans might be even more irritating. Equal parts beardo, antisocial masturbator, and Guitar Center geek, the typical Converge fan sports a patchy beard, a paunchy belly, and a super-aggro Internet persona with which he overcompensates for his numerous personality flaws and hygienic shortcomings. You might never meet him face-to-face, but as soon as you see his indignant, dorkier-than-thou posts on the Relapse board about how whatever you like sucks compared to what he likes, you can picture him in your head as clearly as if he were next to you, while being grateful he's not. Enjoy pissing away your lives on shitty metalcore, Converge fanbois, I'll be over here texting your little sister and impressing her with stories of seeing this terrible band 15 years ago.