Because rock (and pop music in general) is fueled by testosterone, bands consisting of women are mostly regarded as gimmicky and given their own extra-special category in people's minds, separate from all bands that actually sound similar. To further this, here's an article specifically about bands with women in them! (Bassists and singers don't count.)

The first band ever to be worth anything, from the beginning of time forward, was X-Ray Spex. Punk in 1977 was such an inherently limiting genre that it could only allow about three and a half truly great albums, and Germ-Free Adolescents was one of them. In addition to a lead singer who seemed genuinely out of her mind, in sound and appearance, they had a sixteen-year-old girl on sax.

Here is where I'd like to interrupt all our pipe-smoking pondering on high-level musical thoughts and just switch over to asking how fucking cool is that? Did you play sax in a first-wave punk band at sixteen? No, you didn't, and you should live the rest of your life in shame because of that. She played sax in a punk band literally years before other people got the idea that, hey, we can add horns to our punk band! In case you're thinking something along the same lines: too late, and your hat is stupid. Anyway, X-Ray Spex did the best possible thing after making a great album: They broke up in a whirlwind of band feuding and corporate meddling to make them more commercial. No after-the-fact explanations necessary as to why that second album doesn't really count, or why you shouldn't get the greatest hits. No. Just one album. Done. Every band should do that.

[Lowtax Note: The singer sounds like those annoying fireworks that make screeching sounds before exploding.] 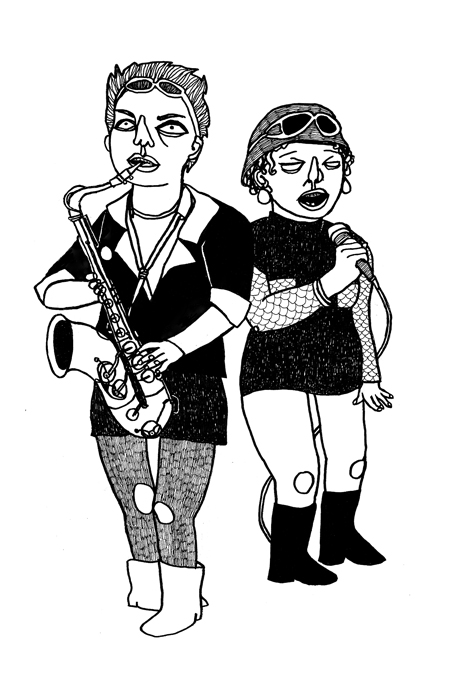 Around the same time, The Slits were busy touring with The Clash and being recorded for documentaries about The Clash and mentioned in an offhand way when people talk about how great The Clash are. They were a decent but unspectacular punk band, and because they released an album, they get lumped in with that sound ... despite the fact that they released the first album to combine punk with reggae and dub in a major way. It goes without saying that it's way better than almost any "real" punk album. I was intending on making fun of a Pitchfork review of it, but it turns out to summarizes the album pretty well: "This album is terribly, terribly important in the history of the rock music and the grand scheme of canonical flippity floo flap."

This period is objectively the best in musical history: post-punk. It's commonly derided as a genre where a bunch of white dudes moped around and didn't have sex, but there was way more to it than that: Some people moped around while playing fantastic basslines, which is the best kind of moping. Instead of just not having sex, they explained in great detail why having sex is so bad. Logic prevails! While there were a bunch of these bands -- and if there were any justice, you'd hear all of them constantly -- the best of the bunch was Au Pairs, a two-women-two-men band fronted by a lesbian with one of the most menacing voices ever put to tape. Listening to Au Pairs is like getting confronted by an ex shouting at you in the middle of a dance floor.

Post-punk was an underground genre, meaning there was no mainstream exploitation of the sound, so there aren't any truly awful bands that tried to rip off the ones listed above. That comes later. Unfortunately, underground rock in the '80s was almost entirely male-exclusive, because Americans were all about shedding the restrictions of hardcore without getting rid of that pesky "no girls allowed" attitude. Across the ocean, well ... it would be way too easy to make fun of British synth-pop, but really, haven't you heard all these comments before? At some point, the world needs to come to terms with the fact that no amount of haircut jokes is going to make The Human League any less cool.

Skipping ahead from great bands that formed the backdrop of documentaries about The Clash to bands that are in the footnotes of biographies of Kurt Cobain, we consider the riot grrrl scene in Olympia, Washington. Hobbies of this scene include knitting, sorting record collections by gender, and making some of the best indie and punk albums ever. Aside from fantastic name-drops like Beat Happening, good girl bands were overflowing from this scene, made even better by the fact that they would often record the songs they wrote. A lot of reviews since this time have praised the influence that Bikini Kill had in organizing everything, while saying that their music wasn't really that great. This is a load of shit. They made simple, angry songs with good hooks, and if that's not enough for you, then maybe one of these Garbage Day articles extolling the technical prowess of some Scandinavian nativists would be more your speed. But, yes, they did inspire tons and tons of great bands, and clued the suits into the fact that every now and then, people are willing to drop some cash to hear women play music.