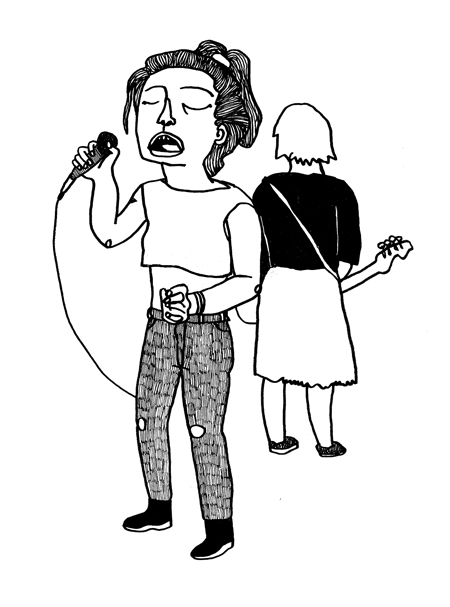 So, what's the obvious response to a genre that empowers women and criticizes traditional gender roles and the male-centric portrayal of women's sexuality? Make it sexy! A Veruca Salt song mostly sounds like the soul being sucked from girl-fronted punk bands. Fortunately, as a person who was too busy doing sophisticated things like being eight years old when Veruca Salt was popular, I was spared hearing them the first time around. But all you Gen-X types have some explaining to do as to why there weren't riots in the streets to protest this garbage. Oh, that's right, y'all losers were too busy whining about how the Spice Girls were awful. I am here to earnestly defend them, because their music was catchy, well-written, and at least trying something remotely different instead of running guitars through the Aerosmith Generi-Sound 2000. Oh holy hell, Veruca Salt was actually produced by the same person that did Aerosmith. I am so good at this.

Even if you manage to avoid Boston being performed by 20-something girls, you should watch out. There is a well-placed mine in a field of critically-adored music made by women, and it's Liz Phair. She slipped into mainstream consciousness by releasing a complete bore of an album that might or might not have been based on Exile on Main Street; regardless, it shares a lot in common with that album in that it's way too long and aimed at dads and other people that wear sweaters. While a bizarrely praised album isn't noteworthy all by itself, her decline into irrelevance -- even among the people who enjoyed that album -- is one of the most hilarious things to happen to music. As if it weren't enough to cater to everyone by making boilerplate indie-rock that was somehow both melodic and tuneless, ten years after it was released came her self-titled album. It's that bad. If you desperately want to see what indie-rock becomes once it has a mortgage and doesn't mind possibly getting accused of looking at Photoshopped Mandy Moore photos, look at the cover. Look at it. Also, one time somebody confused Liz Phair with PJ Harvey, so I will never forgive Ms. Phair as long as I live.

In a perfect world, this article wouldn't even be necessary. People would look at new bands coming along that have women in them and not immediately compare them to nothing but older ones with the same gender composition. When the first Vivian Girls LP came out, people were quick to dig around their bookshelves for riot grrrl records to make comparisons to. No, sorry, they're just a good noise-pop band, and while it's really great when a song is a radical feminist statement, it isn't always. You're free to picture the band acting super-serious about everything and making up words with "her" in the middle if it helps, though.

Thanks to Ali "Women in Black Metal" Horn for the illustrations! And if you're looking for more recommendations under the comically oversized Women in Rock umbrella, check out Slant 6, Shannon Wright, Subtonix, Autoclave, the Crass LP Penis Envy, Electrelane, Maximum Joy, and -- just e-mail me or kingcobweb if you want more.-- GD