Your Band is Great! 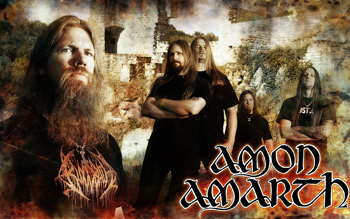 Amon Amarth
kcw: Wow, that sure is some skillful guitar playing! I certainly would never be able to play that fast. It takes talent and dedication to be that good at anything. These songs are so complex, too, it's obvious that it's very deep, intelligent music for extremely intelligent people. And those drums! They sure are fast and creative. In their videos, Amon Amarth incorporates a lot of old Nordic imagery and stories, which is something that only good people have done, historically. They must also have to go through a lot of trouble every day, washing their hair and keeping it nice and tidy like it is. It's so much more skill-intensive to do that than it is for short hair!

GD: Amon Amarth inspires people to create, which is one of the most important things an artist can achieve. Check out these lovingly rendered animated videos set to Amon Amarth's music, or marvel at this Photoshop Phriday image that wonderfully combines the band's name with a picture of adorable puppies! People call Amon Amarth "Viking metal," but the band's members have reportedly never raped or pillaged villagers, despite the ample opportunities their lifestyle as a touring band presents! Also, they sing about a "Rainbow Bridge," which sounds delightful! 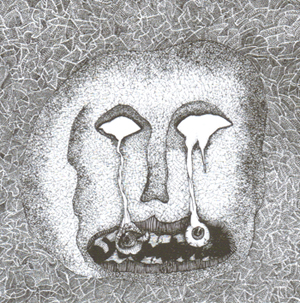 Rudimentary Peni
kcw: Too many bands have gone overboard trying to make long, "epic" songs with sweet, graceful, melodic vocals. Hardcore, in all its incarnations, has bucked this trend. I'm also extremely impressed with the vocalist of this band: It must be difficult to sing that loudly at one note without breathing for the entire song.

GD: When some small-talking stranger finds out I'm a music critic and asks "what's your favorite band?", I seldom respond with Rudimentary Peni. The person probably isn't going to be familiar with any of my answers, and if he or she doesn't seem to have a genuine interest in looking up the band later, I'd prefer to use something with less syllables and no genitalia references, simple words like "Drudkh" and "Burzum." But Rudimentary Peni is actually my favorite band. Despite this fact, I would not be able to identify any of the members of this group, even if they sat down at my table and asked me what my favorite band was, which I guess could potentially lead to a missed opportunity.

I wouldn't recognize Rudimentary Peni because they let singer Nick Blinko's bizarre illustrations define their visual aesthetic rather than taking pictures of themselves. So much of punk is spiky hair and leather and other peacockery, and Rudimentary Peni deserves credit for completely removing themselves from the fashion side of things. Also, they devoted an entire album to songs and skits about H.P. Lovecraft, and another to mumbling about being a pope! 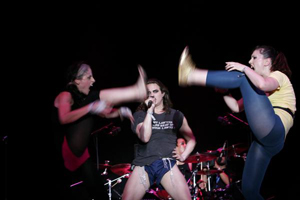 Fischerspooner
kcw: Personally, I evaluate all music I hear on a scale of "sounds like New Order" to "doesn't sound like New Order," with the former being vastly preferable. Fischerspooner is a great way to let people know that you can enjoy synths and the handclaps from a 909 without being a "people person," if you know what I mean. Synth-based music in a rock or pop structure gets a bad rap from people who prefer a bunch of old guys on guitars, but there's been so much creativity in synth-pop and related genres because of all the possibilities and unexplored terrain. Plus, Fischerspooner videos tear down the traditional oppressive female beauty standards with the people they choose to show, which is a strong step forward for feminism.

GD: Fischerspooner arrived on the electroclash scene with a lot of hype, but then no one in America bought their first album, and then "electroclash" stopped being a word anyone says. But the band continues to release albums, teaching a valuable lesson about persistence in the face of disappointment. Also, many people have heard their songs -- in advertisements, mostly -- without having any idea that a band called Fischerspooner was responsible. This makes the group a champion of unsung, faceless artists everywhere, from jingle writers to menu designers. Yet someone cited Fischerspooner as a favorite band, so no matter what you do, and no matter how much obscurity in which you think you're doing it, there's probably someone who notices and appreciates your efforts!

Sparks
kcw: Sparks has made great progress in helping to remove bad associations from the little square mustache. Plus, it's heartwarming to see brothers that can make great multi-genre music together, instead of always being mad at each other and throwing fits and leaving the band. Brothers forever! And the singer's accent is positively adorable.

GD: Unknown to most, a buddy movie pairing Rob "Deuce Bigalow" Schneider and Jean-Claude Van Damme exists. After the movie ended, I was in the emotional state one might expect from someone who had just watched a Schneider/Van Damme buddy movie, when suddenly I perked up due to the closing-credits song. Now, many Van Damme films feature amazing closing-credits tunes (though the awesome "Derailed" rap is lamentably hard to find), but this Sparks number was a step above the usual fare in terms of catchiness and wit. You keep thinking that you're really holding hands/Sorry, that's no hand/It's a knock off. This clip opens with Schneider/Van Damme dialogue, so you can experience the gloom-to-glee transition from movie to music without enduring the whole film! 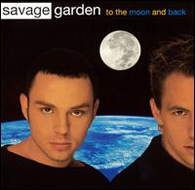 Savage Garden
kcw: I was a bit intimidated by the name of this band (a garden that's savage? That sounds extremely spooky), but Savage Garden's music is just so calming and pretty that it washed all those fears away and replaced them with a deep sense of warmth and love. Whatever this man with a beautiful voice is singing, I will believe him. He'd never lie to me. He's too nice and gentle to do such an ugly thing. I want to have lunch with him. We will have a lovely time, telling jokes and describing how much we like things. I'll offer to pay, but he'll insist on paying because he's a gentleman and incredibly rich, but I'll persuade him to split it.

GD: Pop music can be good music, and sometimes it's a little too good, by which I mean people get the melodies stuck in their heads and they become angry when they can't get rid of them. Because they can't rip them out by force, they channel that violent urge into nasty words about the performers. This is especially true when people don't think pop is something they "should" enjoy, like if they're really macho, or if they're reformed pedophiles. So people make a huge deal about hating pop artists, to the point where any observer would think "wow, that person sure dislikes pop to an unusual extent," when actually they love the music and are just insecure about expressing their preferences.

Savage Garden broke up in 2001, and singer Darren Hayes said of a reunion "I'd only do it if it cured cancer." That means everyone in the world would have reason to celebrate the announcement of a Savage Garden comeback!

"I like early '90s smooth pop. You know, middle-aged white men covering Motown hits. Michael Bolton, Michael McDonald, stuff like that. Nothing like having all that annoying "soul" taken out! (YOU know what I mean...) You can really tap your foot to it, ya know?" -- forums poster Jimi Hendrix

GD: I perform an uncanny vocal impersonation of Michael McDonald, so I'm glad to hear people still like his music because that keeps my talent relevant!

In closing, we challenge you to take pride in the music you enjoy! Instead of dismissing something you genuinely like by labeling it a "guilty pleasure," try to communicate what makes it valuable to you. Perhaps people will see something in that music they hadn't seen before, or at least they'll understand more about why it moves you! Unless you like any of the stuff featured in next week's column, in which case you should feel deeply ashamed.