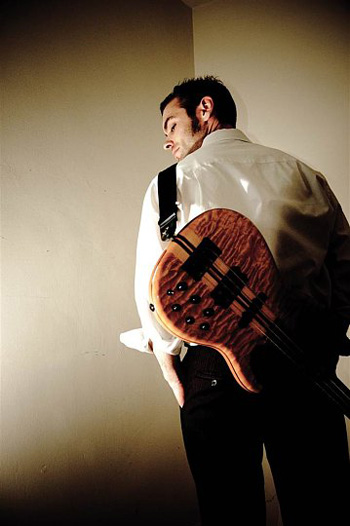 SH: so why is the band called 'dapp'

DFH: Oh that's the bassist's last name from what I can tell.

DFH: They're like Van Halen in that way, and that way only.

DFH: If you were, god forbid, in a band with this guy and it wasn't HIS PROJECT, would you let him sing? Of course not.

SH: yeah, i don't think i'd let him face the audience either

SH: he keeps making these weird faces like he is a musical mime

SH: oh SHIT i bet these guys have at least one song where he forced the other guy to learn a choreographed dance step with him

DFH: "Alright man right before the solo we're going to go back to back like in that sweet Poison vid except I'm CC and Bret Michaels."

DFH: How many Les Claypool posters do you think Dapp has in his music room?

SH: my guess is two or three but he probably says he doesn't like primus and is only into whatever that shitty band was that les claypool was in with the phish guy and a really embarrassed stewart copeland

SH: this is a Sophisticated Funkster my friend

DFH: Alright, I am going to spare you the 11-minute cover of Eleanor Rigby no one in their right mind wants to hear and instead give you this little massacre of a Bill Withers classic.

SH: i'm tellin ya this guitar player is on a mission to make every single song in the world song like it came from an album with a photo of an acoustic guitar on the cover

SH: he's like running everything through a filter called "cdbaby dot com"

SH: how does he find time to hit the gym when he's workin on all those tasty licks?

SH: "i'm sorry dapp, but i've got to tell you that we don't have a workout regiment for 'soul.' scientists have yet to isolate the funk-muscle'

SH: Dapp is the only guy in this group without kids and he gives the other two stern lectures about 'putting the band first' and priorities and what-not

DFH: Oh, yep, he pronounces "guitar" exactly like I thought he would

SH: i bet these guys have two or three originals that they play and dapp secretly thinks one day mutt lange or something is going to be at the all-dad talent show and catapult him to stardom on the strength of his hit tune "Whiskey Kind of Woman"

DFH: Dapp's really working on funkifying his vocabulary but he's struggling to find the proper moment to use "y'all," and can't figure out how to improperly conjugate his verbs.

DFH: I wonder if Dapp demands to be bathed in red light at all time

SH: why is this guy making youtube videos anyway, he's probably already got a sweet weekly gig at a bar called O'Flannery's or something

SH: "guys if we keep this up we'll get that cruise ship gig in no time"

SH: oh SHIT dude around 1:35 or so you can hear him talkin to the bros in the band off-mic

SH: you can't really make it what he's saying but i bet it includes the word 'funk'

DFH: And coda. Dapp seems like a guy who likes showing off that he knows what a Coda is.

SH: oh shit i bet the keyboard isn't at some of the shows cuz he isn't old enough to get into 'em

SH: when people ask dapp what kind of music he plays he says "well, it's hard to describe"

SH: but it's actually incredibly simple to describe: "bad"

DFH: "I dunno if you've ever heard of the Isley Brothers, but..."

SH: what's weird is that Dapp kinda looks like a younger dude

SH: what happened to this guy at a young age