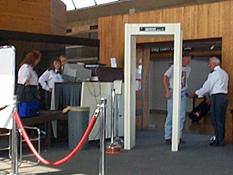 The phrase "airport security" is made up of two words: "airport" and "security". An "airport" is defined as "a tract of leveled land where aircraft can take off and land, usually equipped with hard-surfaced landing strips, a control tower, hangars, aircraft maintenance and refueling facilities, and accommodations for passengers and cargo," and "security" means "freedom from risk or danger; safety." However, if you were to examine these two words even more closely, you'd realize that they are made up of "ai", "rport", "se", "curi", and "ty". What does this mean? Nobody is quite sure; it is a great mystery. In fact, I don't know why I brought it up in the first place. I think I was going to make some deep, thought-provoking point, but I forgot what it was.

Another great mystery is airport security, whose sole purpose seems to revolve around slowing down honest, non-terrorist travelers so they'll miss their flights. This is accomplished by implementing a devious, two phase plan:

Phase I: The Metal Detector. The metal detector consists of a large series of fake doorways staffed by elderly men and overworked women. You will be asked to place your carryon luggage into a goat-sized fake doorway where "highly trained technicians" (airport personnel who were able to dress themselves that day) will shoot invisible, cancer-causing radioactive laser beams into your luggage. These death rays are used to determine if you have any terrorists hiding inside your luggage (as a rule of thumb, you shouldn't). The metal detector technicians are also able to see everything you're carrying onto the plane, so if you just stole grandma's cremated remains and don't wish to be caught, you should probably think about shipping it via mail order. After your bag has run the gauntlet and passed their rigorous inspection, it will be thrust to the end of the conveyor belt where the six-ton bag belonging to the man behind you will be spit out out and crush it.

You will additionally be forced to walk through another fake doorway, one which will scan you for "dangerous items" such as anti-tank missiles and the Flesh Eating Virus. When traveling, you will want to make sure you carry neither of these. "Dangerous items" which will set off the metal detector include (but are not limited to):

You should make sure you're not personally transporting any of these items while traveling, else you will be subjected to a grossly overweight man waving a musical baton all over your body and generally treating you like a punk criminal. The musical baton will always go off around your groin region, which will force you to make nervous jokes such as "ha ha, it's not like my penis is made out of explosives or anything!" (assuming you have a penis). Then they will just look at you funny and motion for the Police to come over. Well, that's at least what happened to me. 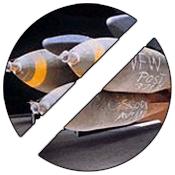 Phase II: The Interrogator. This person, operating under the clever guise of a seemingly harmless ticket taker, will assault you with a series of questions which have been designed by the nation's top military psychologists. They are used to weed out the "innocents" (regular passengers) from the "evil terrorist threats" (you), and consist of the following two questions: "have all your bags been personally packed by you?", and "are you carrying any bags which have been given to you by someone you don't know or have been out of your possession?" You should think long and hard before answering both of these questions, because your answer is what will determine whether you'll be staying the next night in the Howard Johnson's or prison (although both have remarkably similar characteristics). Here's a quick guide I have compiled from my many years of airport experience:

Question: "Have all your bags been personally packed by you?"

Question: "Are you carrying any bags which have been given to you by someone you don't know or have been out of your possession?"

Correct Answer: "No."
Also Acceptable: "I don't let nobody touch my bags, if you catch my drift." (Winking)
Less Acceptable: "I talked to the guy at the tram for at least 20 minutes, so I think I know him pretty well by this point."
Incorrect Answer: "The United States is a white devil that must perish in the flames of righteousness."