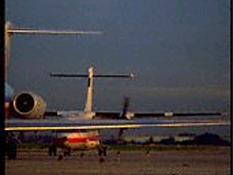 Although the stewardess' will attempt to tell you otherwise, you should take off your seatbelts and stand up the exact nanosecond the plane's landing wheels touch the runway. The faster everybody takes off their seatbelts, the faster the plane will be able to unload (the sound of hundreds of unclicking seatbelts let the pilots know that you are in fact ready to get off the plane and he should probably hurry up and let you off). If you ever find your flight taxing for an incredibly long amount of time, this is undoubtedly because some old hag in the back seat is too weak or stupid or lazy to undue her seatbelt. You should probably go back there and hit her in the face, or at least encourage her to hurry the hell up and die already.

After making a large commotion by springing to your feet as soon as the plane lands, you'll want to take your time removing your baggage from the overhead compartment and the seat in front of you. After all, the flight attendants did repeatedly warn that the items in your luggage may have shifted during the flight, so those separate containers of chlorine and hydrogen gas just may have smashed into each other to form some dangerously corrosive hydrochloric acid! Besides, it's not like anybody behind your seat has a connecting flight or anything; 97% of the people who fly do so just for the fun of it!

When exiting the plane and going to get your suitcases, you must remain alert for the roving packs of predatory shuttle services that roam the airport halls. An experienced traveler can recognize them from their revealing beeping and honking sounds, in addition to the shouts and telltale cries of the shuttle operator ("SHUTTLE SERVICE! MOVE OUT OF THE WAY! SHUTTLE SERVICE! FOR GOD'S SAKE, GET THE HELL OUTTA MY WAY OR SO HELP ME JESUS, I'LL RUN YOUR WHITE ASS OVER!"). If you do happen to encounter one, you should immediately jump out of its path and hide behind some plastic chairs or a nearby fat man. If you're lucky, the shuttle will not have spotted you and will move on as if nothing happened. However, if you were noticed, the shuttle will head straight for you, attempting to run you over and cause permanent injuries. Nobody knows why shuttles have become so hostile and predatory lately, but scientists believe it probably has something to do with being forced to cart cranky old decaying people around all day.