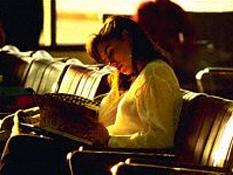 Before picking up your ticket, you'll want to go to the nearby airport "entertainment" stand and pick up something to read on the plane. Airports, by law, only carry the following authors and reading materials, which I have included along with a brief description:

Dean Koontz - Outcast, highly intelligent man discovers gigantic conspiracy involving a faceless, meglomaniacal organization with experimental weapons and viruses that they're using to either cause kids to become mutants, or cause mutants to become kids.
Stephen King - Having actually stopped writing about any concrete subject years ago, his books are currently created by allowing a computer to copy and paste randomly chosen paragraphs from previous novels and newspapers from the late 1800's.
Tom Clancy - Terrorists count for nearly 96% of the world's population and corrupt government officials represent another 2%.
Ann Rice - Romantic vampires count for nearly 96% of the world's population and vampire hunters represent another 2%. If you see a vampire, you shouldn't have sex with him, although you will probably want to.
A random, crappy sci-fi book that you've never heard of with pictures of a spaceship and a planet on the cover - These books are written by people who are paid by the number of characters they introduce into the novel, so prepare to write a flowchart defining the genealogy of every character from the T'iree D' Naval galaxy.
The Wall Street Journal - Although it's completely unreadable now that every article is written in 4 point System font, you can pretty much assume the stock market sharply went up in the morning, then back down in the afternoon (or vice versa).
Random national newspaper - Some vague war is still going on in a third world country who's main export is limited to counterfeit Charmander figurines.
Random local newspaper - Whatever the national newspaper reports on plus "Man Caught Urinating Into Microwave at Sears" exclusive.
Cosmopolitan Magazine - Everybody in the world is more attractive than you.
Newsweek - Something happened in Russia that should concern all of us, especially if you happen to live in Russia.
Time Magazine - Pedophiles, rapists, and drug dealers are targeting our precious children every day on the Internet, television, in school, and virtually anywhere inhabitable by human beings. The only way to prevent this involves purchasing a lengthy subscription to Time Magazine.
PC Monthy - There are tons of worthless computer gadgets coming out (none of which you can afford), and your current computer is tragically outdated, inferior, and a general source of scorn and mocking.

When you receive your ticket, you should be aware that airline companies often "oversell" their flights. This means that if the plane can only hold 80 people, they will sell seats to at least 260 passengers. There have only been two flights in the past decade which have not been oversold, and both of these flights only exist in legend, much like Davey Crockett, Santa Claus, or Jimmy Carter. When a flight is oversold, some passengers will be asked if they would like to take another plane, one which has a layover in Phoenix, Arizona. They do this because Phoenix has the highest concentration of crappy souvenir shops and the airline companies get commission for every idiotic ceramic Phoenix cup with a picture of an eagle they sell. Sometimes they will try to send you to Atlanta as well, which government agents are currently stocking with Phoenix cups as you read this.

After receiving your boarding ticket, walk as close as you can to the gate's doors and stand motionless in front of them until you are allowed to board. This will tell the rest of the passengers that you are in a hurry and really want to get to wherever the hell the plane is flying. You should concentrate on blocking the path of all people trying to exit and remain adamant of your coveted position in line, despite the fact that everybody has been assigned a designated seat and it doesn't matter at which order you enter. The joke's on the suckers waiting in line behind you; the first 20 people on the plane get blessed by the Pope!