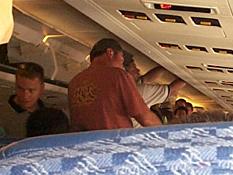 Many airports have a "two item carry on limit", which is not a rule, just a friendly suggestion. Feel free to bring up to sixty bags, each one large enough to carry a bloated warthog in. If a stewardess tries to claim that you can't bring your twelfth bag aboard, you should argue with her, shouting something along the lines of, "but it will fit under the seat! I know it!" Acceptable items to bring carry on include golf clubs, shopping bags full of bricks and steel bars, drum sets, hubcap collections, beach umbrellas, and patio furniture. Insist that each item can fit under the seat in front of you, and then futilely attempt to shove them underneath until approximately 15% of the item sticks under the seat, at which point you triumphantly scream, "See?!? I told you!"

If you come to the unfortunate realization that your luggage can't fit under the seat, you should try to shove it into the overhead compartment above you. Don't worry if it doesn't fit at first; simply take a step into the aisle, blocking everybody else attempting to board, and contemplatively stare at the protruding baggage. If you gaze long enough and adopt a really serious looking facial expression, your luggage should eventually shrink, or the overhead compartment will grow large enough to accommodate it, or the frustrated looking people behind you in line will eventually leave and cancel their flight, freeing up more overhead compartment room.

Once your flight takes off, you must be sure to stare out the window and remark upon all the various buildings and landmarks you're flying over. Make sure to ask questions like, "is that a mall?", "who do you think lives in that house? What about that one?" and "is that a lake or a tennis court?" Feel free to do this even if you're not sitting in the window seat; simply reach in front of the person there and point out the window while you ask such challenging and mentally stimulating questions to your invisible friend or the imaginary aliens from another dimension.

If your flight is under two hours in length, the stewardesses will serve a combination of plastic, non digestible snacks and a warm beverage that you didn't originally ask for. Regardless of what you order, they will have just run out. Instead, you will end up drinking either Sprite or ginger ale. That's all they ever stock their carts with these days, Sprite and ginger ale. If your flight is two hours or longer, you will also be given a "light snack", which is neither light nor a snack. It usually consists of a small, vague sheet of fake meat in between slices of a bread-like substitute, a bag of something incredibly salty and impossible to open, and a shrink wrapped cookie that has had a factory machine embed chunks of "flavor particles" into it. If you are feeling like living life on the wild side, you can opt for the "kosher meal", which is usually so bizarre and alien that not even a starved African dog would get within 50 meters of it (I have no clue how far 50 meters is, I just wrote that to impress all the people who don't live in America and actually use a system of measurement that's based in reality). Despite sweeping governmental regulations and reforms, the airline industry is still serving food that was manufactured back when Danny Bonaducia had a respectable career, although nobody can remember that far in history to confirm this. Airplane food is in fact so awful, that a scientific study proved 92% of all standup comedians in the late 1980's made their entire life's savings off airline food jokes alone! Combined, that's enough money to dress The Hair Giant in overalls for the next four days!