Elderly Couple About to Die 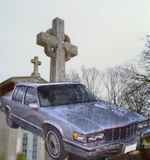 SPHERE OF AWARENESS: Very low
CHANCES OF ENCOUNTER: Fairly high
AVERAGE SPEED: Dangerously low
DRIVING STYLE: Unpredictable
DESCRIPTION: The Elderly Couple About to Die are part of a totally foreign culture, one which believes that the final act of somebody's existence should be to pass away behind the steering wheel of their own car. They feel that the most holy and pure way to "pass on to the big toll booth in the sky" is while driving down the highway. As a result, there are now hordes of these people clogging up the arteries of our streets and roads, simply cruising around at the slowest speed they can possibly reach without shifting into reverse. These folks have absolutely nowhere to go and no time they have to be there, so one must exercise caution when encountering them. Luckily, they can be spotted easily. Simply look for the following obvious indicators:

Collection of foam hats on the back windshield

Bumper sticker that mentions either Jesus or the VFW

Car is the size of a large houseboat

Beanie Baby collection on back windshield

Luckily they are not very aggressive, although they do have a tendency to shift into other lanes with little to no warning. Scientists believe that not even the Elderly Couple is aware of when they're going to shift lanes; an unpredictable biological impulse is suddenly sent to the driver's brain and he immediately reacts by swerving to the right or left. No cure has been found for this disease yet, as the test subjects tend to keep dying. 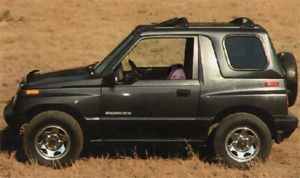 SPHERE OF AWARENESS: None
CHANCES OF ENCOUNTER: Very high
AVERAGE SPEED: Very fast
DRIVING STYLE: Aggressive
DESCRIPTION: The Short Japanese Woman in a Cute Little Sports-Utility Vehicle is a fairly new genre of driver, spawned by America's sudden interest in driving mammoth, expensive vehicles that resemble pregnant Jeeps. Like the Homeboy (see previous page), this type of driver is able to see the road in front of them despite the fact they're a good few inches below the dashboard. However, unlike the Homeboy, this is due to their physical height, as many of them are well under four feet tall. The way the Short Japanese Woman in a Cute Little Sports-Utility Vehicle is able to see comes through the ingenious use of her cellphone (which is embedded in her shoulder). There is actually an underground telephone service for these people which informs them of the traffic in front of their car and provides detailed driving instructions. This is why you will always see the Short Japanese Woman in a Cute Little Sports-Utility Vehicle using her cellphone - because it is needed to survive. If, in the freakish chance that you notice one not using her phone, it is advised to pull over and stay very far away from her, as the chances of a collision are exponentially higher. Accidents involving a SUV result in a 98% probability that the other driver will be killed and the SUV itself will suffer a minor scratch on its titanium-enhanced bumper. 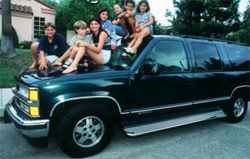 SPHERE OF AWARENESS: Limited to inside vehicle
CHANCES OF ENCOUNTER: Average
AVERAGE SPEED: Above speed limit
DRIVING STYLE: Unpredictable
DESCRIPTION: Often in vehicles such as minivans and expensive SUVs, the Crazed Mother With Kids will never be seen driving a vehicle smaller than 6,000 cubic feet (no, I don't know how large that is in the Metric System. I'm guessing 18 hectometers per milliliter). Inside their urban tanks are hundreds of children who are either being shipped to soccer practice, from school, or to the grocery store. The kids, who have been sitting inside the vehicle for over 19 months, are often spastic and cranky. They can be seen throwing objects around and scampering around like little rat bastard daemons. After putting up with this situation for countless years, the Crazed Mother With Kids has developed an extra neck muscle which allows her to rotate her head around to face the rear of the vehicle within nanoseconds. A string of profanities is then released from her mouth, and she threatens her children by promising "to let your father to know exactly how you're acting." Unfortunately, this event often causes the vehicle to unexpectedly swerve and cross lanes, creating a very dangerous situation. Drivers should respond by shooting these vehicles with a large antitank missile. Hey, the kids would've probably grown up to be convicts anyway, it's no big loss.