Foreign Family With 100 Members Inside Car

SPHERE OF AWARENESS: Varies
CHANCES OF ENCOUNTER: Very high (in southern states)
AVERAGE SPEED: Below speed limit
DRIVING STYLE: Normal
DESCRIPTION: Although the driving style and speed of the Foreign Family With 100 Members Inside Car isn't very unique, the fact that they are somehow to cram every member of their family, their family's family, and their friend's family's family into their car is a remarkable achievement. This, combined with the fact that their vehicle is usually some rust-bucket Chevy Nova manufactured back in the Carter administration, has baffled scientists. Current theory dictates that the Foreign Family With 100 Members Inside Car utilizes space age "Clowncar Technology" to shove an ungodly number of human beings into such little space. The driving style of this species is quite predictable, as they're usually heading for either Target, Wal-Mart, or the In N' Out Burger. A popular crossbreed of the Foreign Family With 100 Members Inside Car species includes the "Redneck Family On Their Way to Tha' Sizzler or Maw's House". 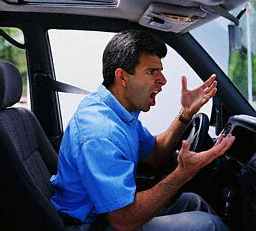 SPHERE OF AWARENESS: Limited to his cellphone and approximately 10 feet in front of his car
CHANCES OF ENCOUNTER: High
AVERAGE SPEED: Obscenely fast
DRIVING STYLE: Dangerous
DESCRIPTION: The Very Important Businessman, due primarily to his high rate of speed, is a very hostile creature. They usually drive expensive German vehicles or fancy SUVs at velocities up to 200 miles an hour (in the Metric system that's 984.12 micrograms per cubical). The Very Important Businessman suffers from "Me Syndrome", a disease which convinces him that he's the only person that exists in the world. This flaw results in The Very Important Businessman devoting absolutely no attention to the safety of others or the effect his erratic driving may have on them. As far as he's concerned, all other vehicles are simply large metallic paperweights that are trying to slow him down and keep him from getting to the golf course for his scheduled tee time. Unfortunately, the only known cure for "Me Syndrome" is death (either yours or his). The Very Important Businessman has a short temper and likes to scream at cars around him, so next time you see one, insult the Republican party and watch the sparks fly!

SPHERE OF AWARENESS: Extended to anything shiny and / or pretty
CHANCES OF ENCOUNTER: Below average
AVERAGE SPEED: Fast
DRIVING STYLE: Safe
DESCRIPTION: While Mr. Mid-life Crisis may at first appear to belong the the species of The Very Important Businessman, a closer inspection will reveal distinct separations between the two. The most striking difference revolves around the tendency for Mr. Mid-life Crisis to own a convertible or some type of car which has a removable roof. While The Very Important Businessman may own a similar car, Mr. Mid-life Crisis will be the only one to actually have the roof off. Scientists believe this is because they want to feel the wind breeze through their newly-implanted hair, or perhaps let the sun tan their cosmetically-altered faces. Mr. Mid-life Crisis, due to his dramatically shrinking penis size and the realization that his life is a hollow shell of failure and wasted lies, has a tendency to overcompensate for his shortcomings by purchasing things which will make him look younger and more appealing to women who are attracted to embarrassingly stupid looking middle-aged men. You will often see them wearing brightly colored Polo shirts, khaki pants, and whatever sunglasses were recently featured on a "hip" action movie. Surveys have shown that over 87% of these people have customized license plates, the most popular ones reading:

They are often seen traveling at high speeds from the local mall (where they bought a nine gallon jug of cologne). Although they do go very fast, they are often harmless, as they hate to cause damage to the vehicle they just spend half their life savings on (the other half spent on designer sunglasses). Women aged 18-30 may receive uncomforting looks from this species and should NEVER make eye contact, as this could result in the knowledge that a little Viagra-enhanced part of his body is rising to attention. 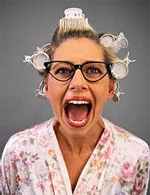 SPHERE OF AWARENESS: Limited to whatever's in her purse
CHANCES OF ENCOUNTER: Low
AVERAGE SPEED: Varies
DRIVING STYLE: Dangerous
DESCRIPTION: As one of the most dangerous creatures on the road, Makeup Lady is responsible for countless accidents and highway deaths. She devotes nearly all her attention to staring in her rearview mirror, focused on the lipstick and eyeliner she's attempting to smear across her face before she arrives at work. As a result, her driving is extremely erratic and unpredictable, often exhibiting the same tendencies as somebody who drank an entire keg of malt liquor and then ingested a funnel full of tar heroin. If Makeup Lady cuts you off or causes you to swerve into a drainage ditch, killing all passengers aboard your vehicle and turning it into a horrible twisted wreck of unimaginable tragedy and destruction, it is pointless to yell at her because she won't be able to hear you over the Dr. Laura show on her radio. Wait until she gets to work and then call her on the phone, assuming she's not gossiping with about the size of Betty from the accounting department's ass.