He strolls into the arcade with a heavy thud. All eyes turn to the room when he enters, each voice silent. Silent in fear of what this man will do. Is he here to rob people? To steal your money, and beat you to a pulp? To rape the youngest of the world's children? No, not at all. This man is here for a rousing game of the Dance Dance. His long, greasy hair and long, shaggy beard are distracting enough to shake even the bravest of players. Don't be afraid though, because generally these people are harmless. To win, you have to look past your fears, usually achieved by drinking and wearing shirts that say "No Fear."

Shouting catchphrases like "You go girl," or "Bootyliscious" in front of a wide audience of arcade spectators, the Flamboyant Homosexual Man is perhaps the easiest opponent of all to spot. Usually, the man is not of the small, petite variety of gay man. Instead, they tend to be older, rugged, hairy men who enjoy being surrounded by young boys. Dancing in a more feminine manner than most strippers, the Flamboyant Homosexual Man is not a terrible challenge as far as the game goes. Rather, it is merely a terrible ordeal to play against him, win or lose. Either way, you'll have endured ass slapping, blown kisses, and will have been called "Honey" on at least three non-consecutive occasions. Winning strategy? Keep your girlfriend no less than three feet away at any point in time to reaffirm your already questionably sexuality. 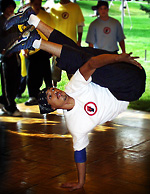 Just like the name would imply, the Actual Professional Dancer is an actual, professional dancer. They know the real moves, and throw them in your face every two seconds. This is one of the most irritating opponents you can face in your time as a Dance Dance dancer. An interesting fact, these are often not very good at the game itself. But their actual dance sways and hip dance lingo is enough to intimidate most opponents enough to make him quite troublesome. The simplest way to beat this guy is to take him head on. Since observing him move and speak like a dancer can only hurt your performance, it's best if you mutilate your eyes and ears beforehand. If you were born deaf and blind, more power to you in this situation. In every other situation, you should stay the hell away from me so I don't catch blindness, freak.