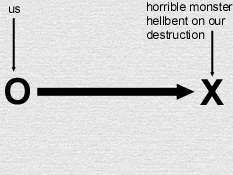 This is the main reason why the armed forces in Anime features can barely beat a DUI conviction, much less a 50-story tall demon robot alien monster.

As mentioned before, a group of evil beings should want to destroy the Earth and then rule the remains. Nobody is quite sure why their plans typically fall into that order, but I suppose people tend to put up less of a fight against subjugation when they're dead. All nations of the world should band together to fight the attacking menace, but they will invariably discover that conventional weapons have no effect on the bad guys. Since the various military establishments throughout the Earth seemingly have the combined intelligence of pumpkin extract, their only attack plan should be ripped straight from the Kansas City Chief's offensive playbook: run and attack straight up the middle. When the hideous space slug wipes out most of France, the army should respond in the following way:

Once the entire world has run out of steel to build ineffective warplanes and tanks with, and the bad guy has wiped out 99% of the population, the Main Character and his annoying sidekicks must exact revenge. In rare cases the Main Characters attempt to defeat the Horribly Evil Badguy BEFORE the world has been blown to pieces, but this is often the exception to the rule. Japanese artists love to draw explosions and portrayals of unspeakable destruction, and having them spend a couple months inking a scene of the US covered in napalm is much easier than bailing them out of jail after being arrested for cramming a few pounds of plastique inside a preteen stripper's mouth.

After the clouds of debris dissipate and the corpses on the ground have a chance to either disintegrate or turn into mindless zombie mutants, the main hero and his ragtag group of survivor friends should attempt to topple the reign of the evil overlord, who somehow still has access to enough fossil fuel and electricity to power his floating Orb-O-Doom death base.

If the Anime takes place in space, then the Horribly Evil Badguy will undoubtedly want to enslave an entire universe by randomly blowing up planets and generally being a jerk. Once again, the underdog ragtag band of heroes must join together in an underdog ragtag spaceship, beat all underdog ragtag odds, and eventually cause the Horribly Evil Badguy to explode. Every conflict in an Anime movie has to be resolved with an explosion. Oh yes, somewhere along the way they must meet up with a mysterious (but friendly) alien race that offers their support by providing comic relief and being repeatedly shot at.

1. Curvy and smooth green hallways that are underlit and usually glisten with some weird substance,
2. Green computers that run on depressingly-colored liquids,
3. Green mutants.

The mutants are usually either a clone of the Main Character, a clone of the Main Character's buddy, or a really advanced and genetically superior clone of the Main Character and the Main Character's buddy. In addition, all experiments formed from genetic engineering turn out to be evil. The side effect of jacking around with mankind's DNA always results in the E-gene being released, which bonds to their DNA and causes them to despise all humanity and want to break large objects which explode when broken. Genetically engineered bad guys can only be defeated by pointing out how wrong genetic engineering is and how those creatures lack the human soul and everything that makes mankind what it is. After that speech, the creature's face should explode and blood should decorate the surrounding walls like globs of spaghetti sauce blown out of an air cannon.

The following events must occur in every Anime film:

Somebody must explode. However, before blowing up, the character's skin must balloon outward and his eyes must bulge as if they're being inflated with a bicycle pump.

Before dying, the Horribly Evil Badguy must change into several "true forms" like a giant pulsating bug, a robot with a human skull, or a laser-shooting blender on wheels.

If somebody is using a large sword, their attacks should be noted by displaying the target enemy in freeze frame motion while a red slash appears across them. This is known as "drama" or "the result of lazy animators."

Before a humongous laser fires, the weapon must spend a good seven months "powering up" and emitting the sound of a 1970's analogue synth being tuned.

Female characters preparing themselves for battle should spend time preparing equipment like explosive machineguns, nuclear hand grenades, and atomic flamethrowers, but end up heading into the fray without armor -- a tiny skirt or bikini will do fine.