THE MOST IMPORTANT STEP 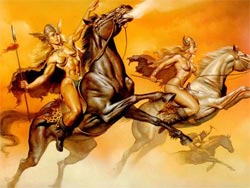 These babes look topless but they really have bikini armor on and they are totally the kind of babe Chocoba would do really hard. Okay, so up until now all of your character stuff is just a bunch of numbers and lists and stuff. That's cool and our guy Chocoba is really coming together, but now it's time to get really creative.

In the world of Dungeons & Dragons incredible adventures are around every corner. Part of what makes these adventures so intense are the incredible characters who live in this magical realm. The DM is going to spend a lot of time crafting awesome characters like a skeleton guy who is half-dragon and a hot witch babe who doesn't wear a top. That means you need to spend just as much time crafting your own character and the best way to do this is to write a believable and sweet background for him.

On the night of the raven star with the blood red moon in the sky Chocoba C'baoth was born to a beautiful barbarian babe in the village of Skull Valley. His father, the mightiest barbarian in all of history named Klurk, was dead. He had been killed by ten dragons that he attempted fight for pleasure. He slew nine but the tenth bit him in the back.

As Chocoba was born into this world there was a powerful earthquake that shattered the earth asunder and lightning crashed in the sky. Somewhere in the primordial darkness of the distant night a volcano erupted and lava poured out onto a village of a thousand virgins who died in agony. Legends tell that this agony was turned into anger, battle anger, that was given to the boy as he exited his mother's vagina.

Chocoba's mother took one look at her beautiful son and then she died from the incredible power of having to give birth to such a mighty warrior. Then the village was attacked by a horde of evil barbarians from the Dragon tribe. These were primitive and stupid barbarians who worshipped dragons. They burned down the whole village. Chocoba took one look at the burning village and his dead mother and he swore to the heavens that he would have his revenge.

He embarked on a mighty quest to seek out all enemies in the land. All who saw him knew he was the strongest human in the land and he was also very constitutional and full of dexterity. He found a greatsword in a lake that was given to him by a good dragon, which he then killed with the sword because he thought it would be a powerful enemy. It was not powerful enough to challenge him. Then he got a greataxe and a longspear. Also a quill and ink, which he used to scribe in his diary about his adventures.

But his adventures had only begun.

As you can see this excellent background not only gives you a sense of history about Chocoba, but also his motivation and why he has some of his equipment. The more epic you make the tale about your character the more you will care about the character and the more epic his adventures will be. I consider this to be one of the best backgrounds I have written, so you can draw inspiration from it, but please don't just copy it.

That's pretty much it for the guide, guys. Just remember that the number one rule of Dungeons and Dragons is to have fun. It says that in the intro somewhere, I think on the Dungeonmaster's Guide. The number two rule is that if you try to pick up wenches in a tavern and Marty is DMing he won't let you just make a charisma roll, he actually makes you roleplay it all out and he talks in a creepy gay voice. So just forget about that.

Anyway, I am planning to take Chocoba on some adventures this weekend with Keith as DM, so hopefully I will have some great stories to tell about his incredible adventures. Thanks for reading my guide!

If you want to scroll down you can see a portrait I drew of Chocoba for my campaign. I'm not really a good drawer though so if you think you can draw a better portrait please send it to me at stevesumner@somethingawful.com and that would be awesome!

I will post it in an article some time and give you credit.