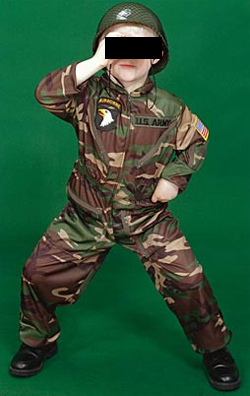 Enemy sighted, toddling towards us along with three big plastic technicals that look like fire engines and what appears to be a scooter of some sort Staff Sergeant Haymaker: Yeah, if we get a kid to sign up the person who refers them, in this case you, gets a bonus equal to 25% of the signing bonus. So say, if I get a kid to sign up and send him to field artillery school then you get 350 dollars. Another one hundred if he speaks Arabic.

Miss Barons: This is disgusting and it's like selling these kids into slavery!

Staff Sergeant Haymaker: Ma'am, I'm offended. Would slavery pay for them to go to college? Will it cover their braces when they turn 12? Would it provide three squares a day, free juice boxes and a fruit snack in the afternoon? The United States has a volunteer military and I would not even want a kid who is not 110% behind making the world a better place.

Miss Barons: I don't want you to ever contact my kids again.

Staff Sergeant Haymaker: Caleb messaged me and he seemed very interested in joining the Marines. I think you just need to let them find their own way in the world. I bet Caleb would like to drive a big green tank all over and make it shoot its big gun at the bad guys. Why don't you ask him?

Miss Barons: He's a child, I'm not asking him that.

Staff Sergeant Haymaker: Do you think that's what a terrorist teacher says when she straps a bomb to Al Calebbi? Do you think she underestimates her students so much that she thinks they can't walk into a checkpoint and blow themselves up trying to destroy freedom?

Miss Barons: I don't think what you're saying really happens.

Staff Sergeant Haymaker: It does too happen. I read a report about it. They're killing us with their children so it's time we kill them with ours.

Staff Sergeant Haymaker: I'm more serious than a Hitler shirt. I am wake-up-next-to-a-dead-hooker serious. Oorah! If you don't believe in America and Freedom, and you don't believe in your kids, then I will park our big Hummer outside your classroom and put up a sign for free mini-Snickers. Then they'll come to me.

Staff Sergeant Haymaker: Go ahead. Marines beat police. It's like asking paper to throw scissors out of the parking lot.

Miss Barons: They'll throw you off school property. This is morally repugnant.

Staff Sergeant Haymaker: Oorah. Well, you just take your high-and-mighty morals and your three-dollar words and you see how well they do against our interactive videogame kiosk. You've got, what, high ideals? We've got puffy American flag stickers and free bracelets. Do you really think your text book of science can hope to compete with our brochure about the Harrier? It's four-color glossy on 110 card stock. CARD STOCK! Oorah!

Miss Barons: Don't ever contact any kids in my classroom again.

Staff Sergeant Haymaker: As long as they message me with questions I am empowered by the President of the United States of America and God to answer them.

Miss Barons: We'll see about that.

Staff Sergeant Haymaker: Yeah, right, what are you going to do? Uninstall MSN? Right, like a teacher could do that.

Staff Sergeant Haymaker: You're not trained for MOS 432224 Instant Messaging Technician, but I bet I could turn one of your kids into a dadgum expert. I will teach those little dudes to tear the throat out of a shark with their teeth. Oorah!