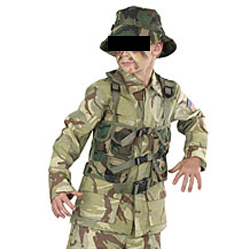 A buddy of mine used to do tech support for a school district in the Chicago area. Back in 2004 he was pulling a late night shift cleaning up after one of those nasty viruses that showed up in emails as playboy.scr and inevitably got passed around the office by dimwitted staffers. He was having a lot of trouble on a computer in an elementary school classroom so he created a hotmail account, installed MSN and started talking to me to kill time. When he finally finished up for the night and bid me adieu he forgot to uninstall MSN. Over the next few months I periodically noticed the MSN account he had created would come online during the day and then log off in the middle of the afternoon. I mentioned it to him and he said he must have just left it on there and he assured me he would get around to uninstalling MSN.

After a quiet summer in 2005, the account started coming back online just in time for the school year. I ignored it for a few months, but around September of 2005 it started messaging me. Once or twice a week I would receive the occasional "eat a butt" or "shitshitshitshit". One of my favorite head-scratchers was, "LANKIN BULLET 2 i said allready". I mentioned these messages to my friend even as they became increasingly cryptic, but he had moved on to greener employment pastures and any hope of uninstalling MSN on that elementary school computer had evaporated.

When it started again this August I resolved to put a stop to it the only way I knew how: become a nuisance to the school teacher until he or she got the new tech support guy to uninstall MSN. That meant somehow making the teacher think leaving MSN installed on the computer was a bad idea. I didn't really want to get arrested for exposing the kids to porno links or, god forbid, just ask them to uninstall it. I decided on the much more patriotic course of changing my MSN name to Sergeant Haymaker and posing as a particularly unethical recruiter for the United States Marine Corps.

In retrospect, that's probably illegal too, so I would like to apologize to the Marines. I specifically do not apologize to Marine Corps recruiters, who were absolutely annoying fuckers back when I was in high school and there wasn't even a war going on. I can only imagine what they're like these days. For everyone else, I hope you enjoy the prank. 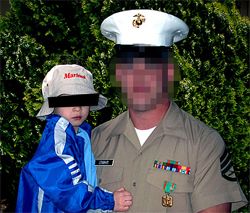 Staff Sergeant Haymaker: Oorah! How are you doing today?

Staff Sergeant Haymaker: Have you considered the opportunities we can offer you in the United States Marine Corps?

Tekwarz: my name is caleb

Staff Sergeant Haymaker: Caleb, let me ask you, have you ever wanted to see a 500 pound JDAM drop down a cave entrance and frag a pack of terrorist scum plotting to destroy America?

Staff Sergeant Haymaker: Caleb, could I talk to your teacher?

Staff Sergeant Haymaker: Oorah. You got it, kid. Let me talk to her.

Staff Sergeant Haymaker: Are you still there?

Tekwarz: One of my students said he was speaking with you.

Staff Sergeant Haymaker: When do you think I could come down and have these kids take some ASVABs?

Miss Barons: I'm sorry, what are those?

Staff Sergeant Haymaker: Armed Services Vocational Aptitude Battery. It's a test that'll help them pick their MOS and serve the forces of democracy.

Miss Barons: Sir, this is a fourth grade class.

Staff Sergeant Haymaker: I wasn't talking about getting them to join tomorrow, ma'am.

Staff Sergeant Haymaker: No problem, oorah. We test them now, offer them some career options, and let them finish out the school year. Then we give them their signing bonus, or in the case of these kids give it to their parents, and then ship them off to Parris Island for boot. Then it's on to the school specific to their MOS to learn how to take part in the War on Terror.