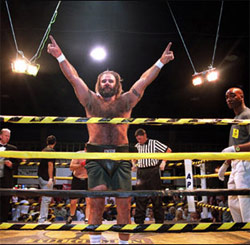 So basically this is Trod, only obviously not as hairy and about a foot taller.So I guess that excuses Willow for her behavior, but that does not excuse David Letterman. No matter how many stupid apologies he puts on the air, I will never accept it. They need to fire him off whatever TV channel has him on.

The other thing I wanted to talk about right quick was that I have been doing some publicity stuff with my managing bro Tank and he is a tough motherfucker dude. And he said "Yo, Levi, you should think about getting into some wrestling or toughman shit" only he said it black and I can't do his voice typing. So I was like, "maybe, maybe."

Then I got to thinking, yeah, I'm tough, but I'm also hot as hell. I know it. Bitches certainly know it. I'm not about to ruin this shit by getting some cauliflower ears and lazy eyes or whatever. What I need is, like, I can be like Tank for some dude. Some dude who can fight like a demon and just fuck people up.

Well, the answer came to me when I was visiting Tripp yesterday. After I was done rolling a ball around and slapping some gay piano I went over into the next room where they keep Toog. That little dude is walking around already and he made his prprprpr sound and gave me a hug. But it was like a bear hug, and it was squeezing the air out of me.

Once I got him to ease up by throwing the half a hot dog I had left across the room to get him to chase it I know what I had to do. I had to start training that motherfucker. There was my toughman.

Tamp ain't disabled like yall think. He is super abled, just in different skills. He maybe can't figure out how to open a door or how shit rolls or whatever physics and history shit. But he has strategy and craftiness. He can bite things furiously. Get that dude near a tendon and it's over. He's an evil little yoda fucker.

I am going to train this motherfucker up like a pokemon. Get him ready for the August's Wasilla International Toughman. I got to come up with a character for my manager character. Maybe Tank will have some suggestions, but maybe you fuckers do. Just click on the name thing at the top and write to me.

Especially if you are hot as fuck.

Whatever, I get it wet whenever anyway. I don't need no interenet to spread my game.