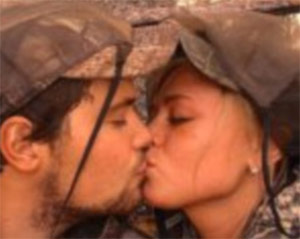 Me and sunny getting ready to get it on and make a baby or actually this wasn't the sex trip this was when I accidentally shot at a sheriff's car driving past on the highway when we were out hunting and we had to hide in a cave for like three hours and...wait actually that was the sex trip.YO what up? Normally I wouldn't be back to posting something on this stupid page on my phone already but I have an announcement to make. Want to get it out there before the smear mergants in the labestream media fucks it all up.

I made another baby! Yep, congratulations to me. Me and my girlfriend Sunny who is a sexy schoolteacher made another kid and I am super pumped up about it. Mainly because now I finally get to see what a kid I made without a Palin looks like.

Don't get me wrong and use this against me like I don't love my kids I already have. Tripp is a little tough hombre with big things in his future and Takk has got like half the alphabet mastered and could mess up any other baby at the special daycare. I have seen him press lift a kid a year older than him and that little dude was like "ahhhh put me down" before Torg put his ass through a castle made out of foam blocks. He hasn't learned to talk yet but he can make the sound of my default ringtone, his chirp sound which means he's about to wild out and a Keystone can opening sound that is so dead on when he gets upset in the middle of the night and starts chaining the crack-pop can sound I think Bodie snuck in and is drinking out my fridge.

I love those dudes. Don't let any expert witness testimony by an autism doctor at custody hearings tell you otherwise. I NEVER painters taped my kid to the inside of a truck cab during a three hour drive to Anchorage. We were going super fast so it was like 30 minutes tops. Tripp loved that shit he was making laughing sounds and what the fuck was I supposed to do? Bristol forgot to leave the car seats and the last time I made a hammock in the front seat out of a beach towel I got pulled over by highway patrol at a sobriety checkpoint and lectured by some dickhole about "you can't risk your baby like that" and "it would have been safer just to put him on the seat" and "why are you driving around with a baby at 4 AM?"

SORRY we can't all be superstar hockey moms with TLC shows some of us have to get up and clean out the tampon birdhouses in the bathroom at Great Alaskan Bush Company. Fair enough I mostly just drink free Coronas and talk to the DJ but have you ever tried to get coconut body lotion stains out of a cloth deck chair? Seriously, I'm asking. The deck chairs are wrecked and with spring break they need them for their topless pool party.

I shouldn't talk about that place though Sunny gets mad whenever I bring it up and I'm like "don't even worry baby you know what toilet paper shows up under black lights and I've seen all those girls buttholes so do the math it's gross in there" but she doesn't want to hear it. 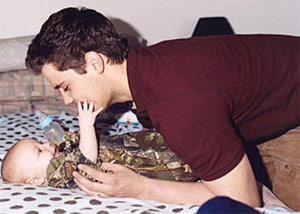 if anyone says I am a bad dad I say fuck them my kids will beat the shit out of their kids so who sucks at being a dad now you raised some weak kidsSo I'm going to be a triple dad now and I've got to be thinking about the future of my new son or daughter. When you're getting ready to be a dad you have to prepare all kinds of shit you don't even think about. I've been through it all before though so I figure I'm more ready than usual. Maybe my knowledge and expertise can help some other dad figure shit out.

First thing, get a big box with a lock for all your pornos. If you can get storage that's good, but I just bought a big plastic bin and then I put all my weights on the lid. I figure if a baby figures out how to move 350 pounds of free weights off the lid he deserves to read all my Gent articles about where to go on vacation to get laid. Turns out basically anywhere south of the border if you go there you will get your balls flipped by crazy latina sucobusses going to town on your jimmy. Just a tip from Gent to you by way of me.

Anyway the weights ended up collapsing the lid and busting up all my VCDs of muscle women wrestling men and my old tapes of giant hooters I taped off the TV when we accidentally got that weird KGB satellite channel for like a week in 1993. That shit cannot be replaced and believe me I wrote letters to Putin begging him like "homeboy please just dip that dial over here for like ten hours and let me dub some more of those crazy mutant hooters" but no I just got my letter back in a baggie from the post office saying that Putin refused it because I might have put a joint in it which they might have tried to charge me for but it was so crazy stepped on by my mom putting oregano and carpet in it that it technically wasn't even weed so they had to drop the charges.

Whatever they still nailed me on trumped up disorderly conduct in court for not wearing shoes or a shirt to my trial but it was summer give me a break. Ended up getting community service which at this point is just making me fill in the holes I dug behind the mayor's office during my previous community service.

Second thing is you're going to have to come up with some names for your baby. Here are some ones I came up with:

Once you got a name picked out you're pretty much good to go. Here's a secret I learned: they're going to tell you a bunch of BS about safety and shit at the hospital like "don't feed your baby chips" and "don't let him sleep in dog bed" but guess what? Free country.

maybe do a conversion around age five and let the kid ride it (of course we will use some hand sanitizer on it and shit)As long as you aren't hurting your kid you can feed him pepsi maxes and cracker combos that you chew up and spit in his mouth. Let him have a milkshake. Nachos. Whatever. Kids like to eat bugs and pennies and shit. It'll be fine. Just relax. My dad left me the fuck alone pretty much always and I turned out cool as hell.

Welp with this goddamn baby coming I got to figure out how to read these crazy directions and put together some furniture. Bought a sex swing for the back bedroom and going to put it next to the crib my mom bought for the baby. I figure baby doesn't know shit about fucking until like at least four years old and it just came out of there anyway so he'll be cool with hit.

If the baby staring at us gets too nosy and starts distracting my role we can just do what my aunt used to do when her stupid fucking parrot wouldn't shut up and put a blanket over his cage. Eventually they get the idea and shut up. I assume babies would work about the same.