Why the fuck don't I have a TV show yet? Because Discovery channel isn't about saving the PLANET.What up team? You keeping it real? Ahahha whatever.

I've been drinking a lot but mostly watching this crazy story about some Chinese dude busting into Discovery Channel and taking hostages. The cops totally wasted him which sucks but that dude had some pretty sweet ideas.

First of all he frigging hated John and Kate plus 8 about Kate Goblins having octuplets and her dumbass little Asian husband in an Affliction t-shirt who left her because he was sick of being a millionaire and wanted to get out and be free and wear bluetooth headsets on TMZ to yell at some girl he met at a theme bar in LA that is all about Christmas year round but I would still probably drill down on that sloppy floppy wife of his.

Oh and dude was pissed about that other show 19 kids and counting which is about like these retards called the Duggars who are ugly as fuck who want to have a million babies to take over the world because of the Bible. All the kids have names starting with "J" and the fucking dad is seriously named Jim Bob.

I'm as big a hillbilly as anyone but Jim Bob? That is just shameful. Nobody in that family is cool. They're like the sort of people who should all be wearing the same dress and on their own singing TV show on one of those weird all Bible channels with too much saturating on the color so that all of the preachers look like grapes and then on weekday afternoons the Duggars & Banjo Hour comes on and you can learn about power fucking for the lord and spreading his seed all around the planet to drown your enemies in a sea of slope-headed blond girls with no eye brows and stinky, hairy parts yearning to plop out another dozen Hills Have Jesus motherfuckers. 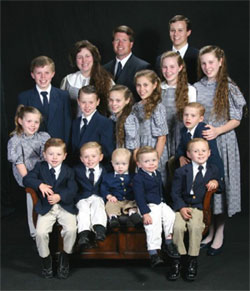 This is the sort of family that's supposed to get FBI raids not TV shows.At some point doesn't their doctor just straight up tell them no? Like when the bartender cuts you off from the jagermeister but you throw a 50 at him and tell him you're a paying customer and threaten to beat him with the jack in the back of your truck and then after you break a chair he tells you to go get it if you're so tough but it's a trick and when you go get the jack he locks the door but trick is on him, fucker, because you're retard drunk strong and don't feel shit so you just break through the door with the jack like Robocop and the only thing that stops you from turning his head into pudding is some little four foot broad cop who is a crack shot with the tazer.

Bottom line I'd like to see their doctor taze the shit out of them so hard those dumb hillbilly fucks look like whole roasters you buy at the grocery store.

So this Chinese dude hates these shows because I guess they promote having babies although to me they promote parking some trucks in front of all the exits of the Duggar house and then setting it on fire in the dead of night, but that's just me. Before he got capped by the cops he used to hold one man protests and throw money around making it rain. I guess he wanted some shows to address what a bad thing it is to have 19 kids and how there are too many people anyway.