Ah, the return to actual MMOs is upon us this time -- well, sort of. Dark and Light once had high hopes of dethroning the World of Warcraft internet blitzkrieg but now sits at the bottom as an unplayable mess. Sure there were some neat concepts but concepts don't put food on the table. Once pay to play and now free for anyone, Dark and Light can only disappoint someone by hogging roughly two gigs of space on their hard drive.

Feature #1253: Midgets squatting on logs!It isn't rare that an MMO fails in such a fast paced cut-throat environment ruled by a company named after the accumulation of a lot of snow. However, Dark and Light failed in such a hilariously remarkable way that it has reached that uniqueness most games strive for. Some games choose to be innovative or in the very least, a rehash of old crap that people will still pay for. Dark and Light, however, showed everyone how to fail with class. One can even say that Dark and Light (like it's name suggests) is a balance of failure to the success of Blizzard Entertainment.

Some poor suckers actually paid $200 for a lifetime membership to Dark and Light and are now stuck with some crappy game that anyone can play freely. I don't feel too sorry for those who did, however, as anyone who thinks they might invest a lifetime to an MMO probably would have only spent the 200 clams on some replica katanas anyway. Some may argue, "but Khad you idiot! At $14.99 a month you would get to play for free after 13 months! That may not be a life time!" You never know argumentative reader; you never know. Besides, the day you are paying upfront for over a year of service from an MMO is the day you need to find another "hobby."

After downloading and patching all day, I stepped foot into a world with less polygons than a single triangle (whatever that means) and I realized something very important: this game looks like rotting ass. Not very pleased to see my 8800 GTS wasted away on such garbage, I constantly had to pull myself away from playing Assassin's Creed just to review Dark and Light. I understand that not all great games look amazing but Dark and Light certainly does not have the compelling game play of Tetris or Pac Man. Everything about this game screams "half-assed," especially the battle animations which I can only describe as flailing your limbs in a stroke-like fashion.

If you have an ATI card you will be relieved to know that you do not have to suffer through the horrible graphics. Dark and Light is far too complex to work on your puny inferior ATI card and only works on cards that real men use (Nvidia). However, if you are unfortunate enough to have a card that runs Dark and Light, get used to 1024 x 780 resolution as no other resolution works. 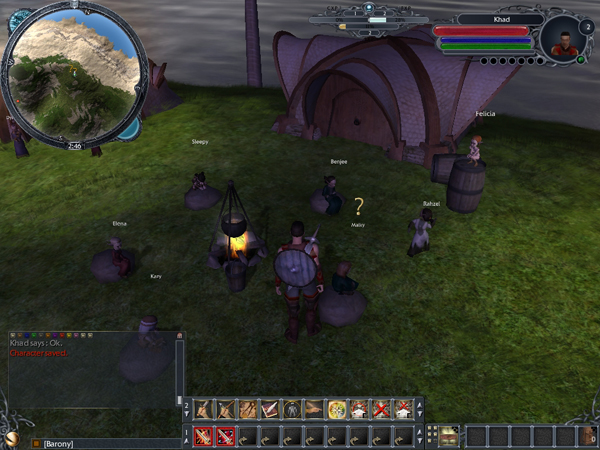 I have a feeling the minimap is very important in this game.

Sure, I had the option to go with something that would possibly look nicer but someone may as well have just taped a piece of paper onto my monitor that read those options. I considered setting all of the graphics options to "low" for shits and giggles but I was afraid my video card would turn inside out and melt in shame. Since I couldn't change my resolution, the clunky and confusing GUI managed to consume half the screen but I suppose that was a tactic used by the folks at Dark and Light to hide their graphics engine. I had spent a whole three minutes in the game so far and I had already felt that same feeling I feel every two weeks: regret.

With everything else going for it, Dark and Light went with the generic fantasy setting with orcs, humans, elves, and some other stupid crap that I still don't care about. Not only did Dark and Light have elves but also faries which seems pretty redundant if you ask me. As a side note, I should also mention that people who ever registered for this game and stopped playing were still billed. I struggled to find something--anything positive about Dark and Light but all of my attempts came up flat.