Our spooky Halloween odyssey through fear begins with 13 on our list and an old favorite of American and British mass hysteria: the menace of backmasking. Recording backwards audio messages has been around for as long as creepy magicians have been able to speak "natas liah" into a Dictaphone.

The concept of incorporating hidden backwards messages into musical compositions rose to popularity thanks to the Beatles. Those fiendish occultists from Liverpool added reversible lyrics to several of their songs, including vile messages like, "When the rain comes, they run and hide their heads" from the song "Rain."

The most widely known of the Beatles backmasking sensations arose from the songs "Revolution 9" and "I'm So Tired." Both songs allegedly included repeated references to Paul McCartney being dead. These messages were so astonishing to fans that some still believe McCartney died and was replaced with a lookalike. The McCartney doppelganger maintains this is untrue, though it is suspicious that he has recorded no music since 1970.

With the backmasked Beatles and their backmasking imitators, real and imagined, the inclusion of reversed vocals on albums became a source of concerned speculation from the sort of perpetually-outraged quarters you don't want speculating in a concerned manner about anything. That's how you end up with ideas like the Inquisition and eugenics.

The initial accusation leveled against backmasking was that by reversing the audio the messages became subliminal, allowing them to influence listeners. This became such a concern in the UK and parts of the United States that labels were included on a few albums warning of the sinister backwards content. Never mind that you can't understand what is being said unless you intentionally isolate and reverse the audio, rendering any sort of hypnotic subliminal message completely pointless.

Backmasking fever had also caught hold in the United States, where bored moms, preachers attempting to write sermons for the elderly, and various fringe lunatics seemed to be turning up backmasked messages in all sorts of places. Led Zeppelin, Michael Jackson, and many other artists were revealed to be devoted followers of Satan using their albums to proselytize their unholy master. A generation was being corrupted by Satanic influences concealed within the lyrics of Michael Jackson's "Beat It!" 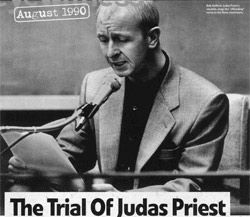 Concerned parents and anti-backmaskers finally found their dream trial in 1990. Five years earlier, in Reno, heavy metal and subliminal backmasking came together in a sin-cursed fusion to make two teenage boys shoot themselves in the head with shotguns. The resulting civil suit accused Judas Priest of causing the suicide attempts by including the backmasked phrase "do it" in the song "Better By You, Better Than Me."

Free speech is a Constitutional guarantee in the United States, but there is nothing in the Constitution about speaking and then using recording techniques to imbue your words with the unholy backwards essence of the abyss. Sadly, at least for God-fearing lovers of life, the case was thrown out after days of testimony.

The popularization of compact discs shook free the hold Satan had on our children and the subject has been largely forgotten since the mid-1990s. In the modern era of downloadable audio files easily manipulated by software the danger is once again on the rise. Crazy moms, legal vultures, and meddling Christian organizations must remain vigilant, lest our souls be laid low by Boards of Canada. 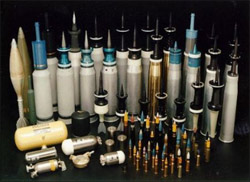 The world is in the clutches of depleted uranium terror. It has become synonymous with the "vicious wars of aggression" of the United States. It has an isotope in its name, after all, so it must be one of the deadliest poisons known to man. The fear of depleted uranium is so intense right now that to even approach this subject I have to preface my comments with boring paragraphs explaining depleted uranium's properties and risks.

Depleted uranium is a weakly radioactive type of uranium that results as a byproduct of the uranium enrichment process. It is slightly more than half as radioactive as naturally occurring uranium, totally safe to handle in its solid form, and one of the densest materials known to man. It has both civilian and military applications ranging from body armor to ballast in aircraft.

To be clear again: depleted uranium is not normally dangerous. Anyone that claims it is dangerous just sitting there is either stupid or lying. The World Health Organization, not known for pulling punches when it comes to evil Americans, points out that holding depleted uranium against your skin for a week straight will not have any noticeable effects. Presumably a shaved rat had to haul around a backpack of depleted uranium for a week.

Depleted uranium is popular as a penetrator tip in various types and sizes of ammunition, owing to its extreme density and its tendency to explode into superheated fire on impact. In the immediate aftermath of one of these explosions the air becomes contaminated with uranium dust. This dust settles onto the area surrounding the explosion and, even though uranium is an element present in every human being, it can be toxic if ingested in large quantities. It is not radioactive plutonium toxic, it is mercury toxic. 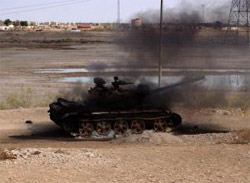 Similar toxic substances found after a tank or plane or insurgent tree house explodes include: everything. Try eating a cup full of lead or iron dust and see what happens to you. Nothing lying around after an A-10 just blew the crap out of a pickup truck should be placed in your mouth. Always be sure to wash your hands after you sift through the blackened hull of a burned tank.

Whether or not American foreign policy is right or wrong is irrelevant. You can be outraged and post all the horrible photos of three-eyed Iraqi babies you can find on your website. You can complain about Gulf War Syndrome for hours. Those things won't change the fact that depleted uranium is one of the least likely contributing factors to Iraqi babies having extra eyes or Gulf War vets being sick.

For an example of a possible real cause, how about being exposed to the plumes of black smoke from oil well fires for weeks? I tend to go by the rule that if astronauts can see clouds of smoke from space it's probably not good to be inside those clouds.

In case that isn't clear, I have created an easy chart to inform you about the risks associated with depleted uranium.

Those are just a few possible scenarios. Despite the hysteria over depleted uranium, it is a risk about as serious and deadly as not washing grapes you buy at the store. I am certain all the proof I need that depleted uranium belongs on this list will be found waiting in my email box less than an hour after the article is published. I can infer that these same people also think not washing your grapes will murder your face.