Have you ever met a Satanist at any point in your life? I'm not talking about some kid that wears Deicide shirts or a guy that is really into crystals and thinks he's psychic. I mean a straight up wears-a-robe-and-a-pentagram-medallion Satanist. The kind of guy that carries around one of those squiggly sacrificial daggers and knows chants supposedly written in Sumerian that will conjure the essence of a demon.

I hope you don't mind if I go ahead an answer on your behalf. No, you have never met one of these people. Chances are there are around ten people like that in the entire world, the rest of the supposed "Satanists" are just goth kids and black metal fans trying to fit in with the cartoonish villainy of their subculture.

Continuing with the assumption that real Satanists are vanishingly rare, we have to cast a skeptical eye at the claims of the 1980s and early 90s that Satanic rape cults were abusing children and forcing them to participate in rituals that involved things like killing babies and having sex with animals. Many of these bizarre stories surfaced during a dark time in American history when the far right wing of Christianity was ascending to power. Like the ghost chasers from number nine on our list, the Christian right saw supernatural forces at work all around them. Instead of bat-like ghosts they saw Satanic rape cults. Their zealotry, combined with questionable practices in psychotherapy at the time (like age regression therapy), produced dozens of lurid accounts from adults who suddenly recalled being tortured by Satanists and participating in grotesque rituals. Children were also subjected to this quackery, producing similar tales of rape and mutilations that sounded suspiciously like Han Solo slicing open the belly of a Tauntan with a light saber.

These alleged cases of abuse at the hands of Satanic cults very rarely produced any physical evidence and never turned up signs of genuine Satanic covens at work in the United States. The rare cases of Satanic themed violence inevitably involved demented teenagers mistakenly believing themselves to be vampires or solitary lunatics ritualizing their own brand of sexual violence and calling it Satanism.

The truth of deadly Satanic cults is that there just aren't any around. There probably never were any significant Satanic cults. Satanists and occultists continue to terrify Americans, earning this non-existent menace a position on this list. Crusaders looking for Satanists where there are none have a habit of ruining the lives of innocent people and destroying families. That bumps Occultists up to number seven. 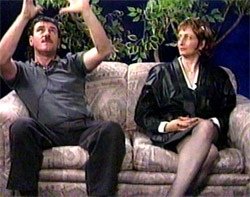 When it comes to UFOs and space aliens, separating the jaded bullshit artists from the true believers can be difficult. You can pretty much bet that they're a bullshit artist when they're hawking a device derived from "alien technology" like a magnetic ring that will cure polio or a belt you wear to ward off radiation, but that still leaves all the authors selling books about alien encounters and alien contacts.

Among these authors and the true believers exist two distinct, although schizophrenic, narratives about aliens. One narrative casts aliens as futuristic angels, visiting earth and contacting humanity to share wisdom and guide us into the future. These benevolent aliens sometimes warn humanity of dangerous events or describe themselves as protectors in some sort of galactic war humanity did not even know was occurring.

The other narrative portrays the various breeds of aliens as intergalactic meddlers, visiting earth to enrich themselves or for even more nefarious reasons. There is a sinister reptilian agenda, the grays are coming to mutilate cattle and abduct humans to implant devices in our bodies, the Rigelians are...well, you get the idea. The aliens in this version of events are interlopers treading on our planet with evil intent.

Here is a single paragraph from one man's version of events that should give you some idea of the insane complexity that has sprung up surrounding the evil aliens narrative.

The Greys made contact with a world governmental body for the first time in 1933 in Germany. However, they were turned away by the German government because it had already committed itself to involvement with the Giza intelligence. A renegade group of human extra terrestrials that were headquartered under the Giza plateau in Egypt. They were predominantly Pleadians. They were on their own, doing their own thing. Ashtar, Commigal, and even Jehovah were a part of the group, for some time. They came down here and played God with us. People worshipped them because they had technology which they used it as their power, big time.

A single paragraph throws us back to 1933, involves the Nazis, two alien factions, the pyramids and someone pretending to be Jesus Christ. This was taken from a long article on the subject written in 1977 by UFOlogist Alex Colier. At the end of the article someone named Byron T. Weeks, MD. warns the reader, "IT IS UP TO EACH ONE OF YOU TO CHOOSE WHOM YOU WILL SERVE..." 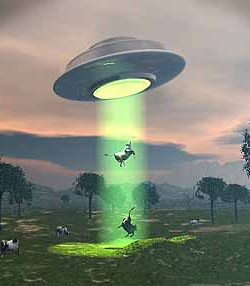 We don't have nearly enough time to comprehensively disassemble the mythology surrounding evil aliens, so let's look at a single aspect of their apparent agenda: livestock mutilations.

From the 1970s to present day the mutilated carcasses of several thousand stock animals are found each year by their owners. The corpses are usually found missing eyes, ear, the anus, and the tongue, all cut out with seeming surgical precision and a lack of bloodshed. Before we even get into the physical aspects of the mutilation, let's stop for a moment and consider the possible motivations of the aliens that are supposedly responsible for killing the livestock.

What reason might the aliens have for coming to the earth and coring the bungholes out of thousands of cattle every year? How are they able to do this without any witnesses, year after year? I suppose it's pedestrian for me to question the inscrutable agenda and powers of the aliens, but pulling the buttholes and eyes out of thousands of cows every year seems like a pretty big waste of time.

Scientists and veterinarians seem to believe that the animals dropped dead and were fed on by various scavengers and parasites. A true believer named Vinci, posting on the abovetopsecret.com forums, begs to differ.

Well...Incase you missed my sarcasm, I call upon Occams Razor for the third time in two days.

First Solution: Thousands of farmers around the world have the technology, knowledge, and expertise in atomical surgery. They often mutilate their own cattle, file police reports, for unknown reasons.

Second Solution: An outside source has been doing this.

I believe it's aliens, because noone on planet earth has the technology to do it with the precision it's done with.

Incase you don't know, all of the mutilations are done with cell-level percision. This is why I keep on saying Atomical surgery. This is all on a very very very small scale, and would require technology that is not available on earth.

Cell-level surgery does not exist on earth. Thus it solution two.

I assume most of you reading this are familiar with Occam's razor, but just in case you're not it is the belief that, "All things being equal, the simplest solution tends to be the right one." So in Vinci's case the simplest solution to the cattle mutilations is not that thousands of farmers are mutilating their cattle using "atomical surgery," but rather that extraterrestrials have traveled to the earth to perform cell-level surgery on the buttholes of cattle. The aliens are so passionate about cattle mutilating they are conducting several of these butthole procedures every hour of every day of every year.

Or it could be natural causes. I'll let you be the judge.