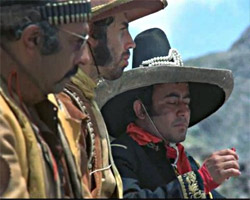 Mexicans are the slavering horde of machete-wielding sombrero-wearing barbarians at the pristine white gates of the United States of America. They creep into our country by the millions every year, stealing away our precious minimum-wage roofing jobs and benefiting from our socialist largesse whenever they go to the emergency room or put their children into our schools.

Sure, one or two Mexicans enter the country legally every year, but these statistical anomalies are barely worth considering. It's fair to assume every Hispanic person you meet is an illegal immigrant from Mexico. Be sure to warn them that you are armed, lest they attempt to creep into your house and get a glass of water while they're mowing your lawn. You're not paying them for refreshment breaks. If they're thirsty that's what the hose is out there for; watering the lawn and the Mexicans.

Television, talk radio, and the federal government are seemingly obsessed with the subject of Mexicans and how they want to take over our country. Americans are told on an almost daily basis that these intruders have entered our country illegally and are therefore criminals, and they are exploiting the system to the detriment of upstanding Americans. 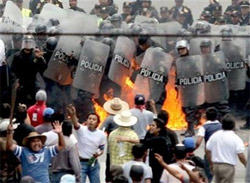 Ghosts? UFOs? They don't get hunted by militias with high-power rifles and camouflage overalls. The threat of Mexicans is taken seriously by millions of people in the United States. Maybe I'm just oblivious to the horrors being perpetrated by all these terrible Mexicans, but I just don't get it.

I live in Chicago, the city with the third largest population of Mexicans in the United States, and I have never once looked around and thought "Man, look at all these Mexicans flipping out and screwing stuff up. Things would be way better if there weren't all these Mexicans."

Mexicans aren't running around overturning parked cars and setting them on fire and they're not screaming late into the night. They're just other people in the city. My next door neighbor is an older Mexican woman who constantly waters her dozens of potted plants, sits on her porch, and waves to me when I walk to get the mail. Not exactly behavior I associate with hell on earth.

One evening one of her kids parked his car in front of my house overnight. This is the most horrible thing a Mexican person has ever done to me. I hear the supposed facts on the TV about all the millions of Mexicans barreling through the barbed wire and invading our country like they're storming into Fortress America. I hear they're taking our jobs and our livelihoods and they're criminals because they snuck across the border stowed inside the glove compartment of a minivan.

The United States is currently involved in a "Global War on Terror," pitting the forces of democracy against fear itself. The first phase of this war occurred on September 11th, 2001 when terrorists made everyone terrified. On the morning of September 11th, with planes still crashing into stuff, I felt 100% terrified. By that afternoon I felt about 50% terrified, by....well, it's easier if I just explain my feelings of terror with a graph.

Over the past eight years I have felt terror for exactly two days. The first day was when the United States was directly attacked in 2001, the second day I felt terror was precisely one year later, when I started thinking "surely they're going to attack again on the anniversary of their first attack." After that, nothing. Not a blip.

You can feel pretty certain that terrorists are not achieving their goals of terrifying people with terror when the government that is supposedly fighting terror has to make a terror warning to try to terrify you that you're being terrified. 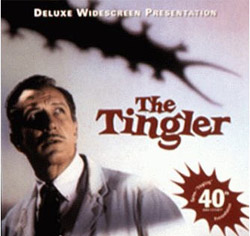 The now-infamous terror alert level system was the equivalent of those Percepto buzzers they put on the seats in the movie theater for The Tingler. Whenever something scary would happen in the movie the buzzers would go off under your seat to let you know that it was time to be scared by the movie. The War on Terror so far has been about as scary as The Tingler and the government's Percepto buzzers are just sort of an annoying sound.

Actually, the government's overall strategy in the Global War on Terror seems pretty counterintuitive. First we were told that Afghanistan was responsible for attacking us, so we invaded them. That seemed like a good idea. Then the government decided that we weren't terrified enough and they sent out Colin Powell with that leonine scowl of his to tell us how terrified we should be over Saddam Hussein.

I didn't really feel too terrified about Iraq, because the last I heard from Saddam was that he had a Koran written with his blood. That just reminded me of that comic Kiss put out with Marvel that included blood in the ink, which I thought was a pretty metal gimmick. Other than that he pretty much seemed to spend his day standing on a balcony shooting a rifle into the air. 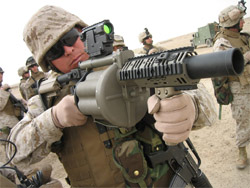 Then the government started uncovering terror plots and notifying the public of potential terror threats. I had heard we were fighting a Global War on Terror so I didn't really understand why they would come out and say, "Maybe don't ride buses today, guys. Something scary might happen."

That's really the key to beating terror. You just have to not be that. Terrified, I mean.

It's really easy if you just stop thinking about it.

I read somewhere that the odds that you are going to be killed by terrorism is roughly the same as the odds that you will win the lottery. I sort of laughed about that, but then I wondered if they meant like the Powerball, the Mega-millions, the Tuesday Millions, or just like a two-dollar scratch off. I didn't really feel any terror though. I don't play the lottery.

"No phallic hero, no matter what he does to himself or to another to prove his courage, ever matches the solitary, existential courage of the woman who gives birth."
- Andrea Dworkin, Dead Cunt 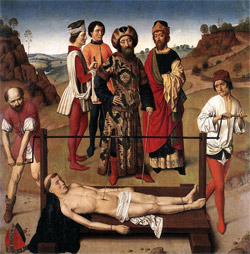 It's not really even a competition. Easily securing he number one spot on the list of Most Awful American Fears are men. Gents, I hate to break it to you, but the world veritably quakes in its boots at the thought of our violent phallocentric patriarchy. We are just as hated as we are feared for our tyrannical rule over womyn and childryn.

Simply walking down the street we are viewed as rapists, drunk on pornography and crazed with the thoughts of violating the sanctity of womyn. If you walk through a park by yourself while children are playing chances are you will be suspiciously eyed by mothers as a potential pedophile. Wherever and whenever possible, the worst is always assumed by this filthy animal called man.

Go to any college campus in America and you will find dozens of emergency phones, carefully lit walkways, and women equipped with whistles and pepper spray. There's nothing wrong with any of these things, except that they're all a reaction to the drooling cartoon fuckbeasts that caricature real men.

Fortunately, most women aren't nihilistic sociopaths like Andrea Dworkin, so there is some hope for men yet. Until we can be moved off the list, please try not to punch any holes in your girlfriend. It reflects poorly on the rest of us.