Get a Japanese chef within a hundred yards of a nice crusty Italian pie and it turns into a mayonnaise covered adventure to 20,000 leagues. I don't know about you, but I like my pizza with extra natto, tempura angler jaws, and squid ink. Don't skimp on the raw corn. 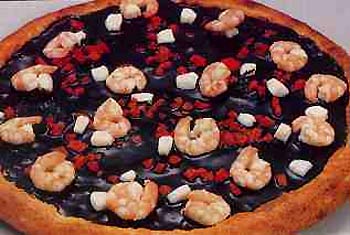 Pizza is hard for the Japanese, and they run into a similar degree of difficulty when they try pronouncing the letter "L". It's understandable, they don't differentiate between "L" and "R" in their own language. You've probably seen this parodied or exaggerated in various racist stereotypes, but it is a real problem for Japanese people trying to learn other languages. English is hard, god forbid you turn them loose on Spanish. That's just one facet of the nightmare of "L" on the Internet, one link in a terrible chain.


That chain begins with Bram Stoker, bearded author of the macabre, who published his seminal work, Dracula, in 1897. About a hundred years later, a manga entitled Hellsing created by a possibly-bearded guy named Kouta Hirana tapped Stoker's Dracula as its gun-wielding, red-zoot-suit-wearing protagonist. Unfortunately for the Internet, instead of using the Roman-alphabet "Dracula", Hirana decided to reverse the spelling to "Alucard" and then translate it to Japanese.

When Hellsing was translated to English, the character's name was re-Romanized in two different forms. One version was the obviously correct "Alucard", the other was "Arucard", a name that suggests Blam Stokel wrote a book about Dracura. So what does all of this complicated bullshit have to do with the Internet? Fucking everything. 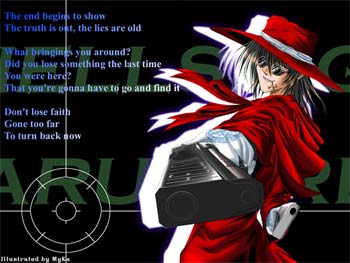 The Arucard/Alucard dichotomy became a source of conflict among appallingly nerdy circles that should never see the light of day, just one of many heated arguments over re-Romanization gone awry. With Hellsing's popularity came a very un-great Diaspora as English-language anime nerds registered warring Arucard user names on their forums of choice. The Internet at large was exposed to the phenomenon.

Most regular folks who saw the Arucard moniker and possessed the astonishing ability to reverse seven letters could determine it was a backwards misspelling of "Dracula." Woes betide them if they pointed out the error, for anime purists would swoop down like JETs of wrath. Their self-righteous indignation over a pedantic issue knew no bounds as they condescendingly explained Arucard is English for Arukado, which in turn is…you get the idea.

Set Bablefish to translate English to Japanese and type Dracula. It returns the word with no translation. The amazing part? It does the same thing with the word weiner.
This isn't the first time this has happened with Arucard. The Japanese get a real kick out of that whole Dracula backwards thing, as you might have gathered if you have played a Castlevania game since 1988. That Alucard is sometimes referred to as Arucard as well, and I'm willing to bet there is someone out there who watched the Japanese version of Bram Stoker's Dracula and has subsequently spent hours arguing the titular character's name is Dracura.

If only this were about Alucard or Hellsing, it wouldn't be a big deal, but the Arucard issue is a symptom of a larger disease. Know-it-alls obsessed with foreign detritus thrive on the Internet, and their particular and warped brand of stupid takes root like some sort of big dumb tree. Arguing over anime names publically is embarrassing enough, but most of the people doing the arguing should otherwise be able to understand highly complex concepts like, for example, that's fucking Dracula backwards.

Without that pesky letter "L" we might have escaped the last 10 years of elitist Internet Japanophiles correcting spelling.