Abelar: Tales of an Ancient Empire

The Case For: Guest stars Metal Gear Hitler in a rare but vivid mystical parchment appearance, which is of course much more miraculous than a tortilla, but slightly less miraculous than a grilled cheese. Suck on that, Mother Teresa! Also guest stars Raiden (not the wussy androgynous cyborg wetsuit ninja, the one that shoots lightning and bears an eerie resemblance to Christopher Lambert).

The Case Against: Abelar almost had decent production values, but it turns out that buying a shitload of expensive film equipment and then just pressing all the effect buttons at once isn't a recipe for success. 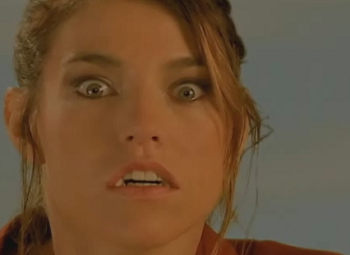 Trillaphon: Uh, yeah, lemme get a #5, extra Abelar, with some honey mustard on the side.

Hydrogen: I thought an Abelar was one of those really gross and weird kinds of sea creature that you're supposed to slurp down with lemon and Tabasco sauce.

Trillaphon: Imagine our surprise when we found out that this is what an Abelar is:

Trillaphon: Oh wait, right, we have no fucking idea what an Abelar is, probably because that's the only time they show it in the movie. My bet is on some kind of crude concept sketch for a weird sex colony in Second Life: The Moon Edition.

Hydrogen: You have come to a world called Abelar *theme from Super Mario Brothers starts playing*

Trillaphon: Well, technically this is also a sequel to something called The Sword and the Sorcerer, maybe there's some sort of helpful intro video that will explai-

Hydrogen: Dear God, there aren't enough trombones in the world to slide us out of this.

Hydrogen: It's pretty remarkable that even at 5 times speed, you really don't lose any of the important key points of that intro.

Hydrogen: Basically. Although we did gloss over the phrase "the Mists of Legendry", which apparently kick in 20 years after your heroic deeds according to that caption at the end.

Hydrogen: The best part is that apparently the reason that intro seems so pointlessly tacked-on is because it was literally tacked on by the distribution company after the fact.

Trillaphon: Well shit, that's a new one. Thank you, Lion's Gate, for pushing the envelope of cinematic failure...back into the editing room.