Yup.Indeed, Jakob beats one of the teens with a brick, then runs them both over with what remains of his car. He then packs the two bodies into the trunk, drives out to an empty field, and lights the whole car on fire to dispose of the evidence. Naturally, the police find the car with two charred bodies inside, but they can't identify anything. This, of course, brings up back to the very beginning of the movie and the shot of the burned out car. This means that the mysterious plot point that has been dangling over the entire movie was nothing more than the aftermath of two murders which have absolutely no consequence, as far as the rest of the movie is concerned. In fact, this image of the burned out car that Vinson Pike clearly considers to be so important is actually the point where the whole movie begins to unravel. I don't mean that in the kind of cool, "Jakob's tormented psyche spins out of control" sort of way. I mean it in the unfortunate, "this is where the plot holes become too large to ignore" sort of way.

You see, Jakob disposed of the last two bodies by burning them in the car (destroying his only means of transportation in the process, which begs the question of how he got home that night). However, he's just been stacking all the other bodies in his cellar this whole time, save for the ones he burned on his own lawn earlier. Theoretically, he could have put all the bodies in the car so that when he destroyed the car, he'd also destroy all the evidence of his crimes thus far in one fell swoop. Instead, he leaves the older bodies where they are, letting them stink up the place. This error in judgment basically sets up the entire remainder of the movie. 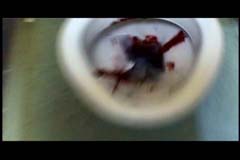 Jesus. For the record, no, I am not sorry about the poor picture quality.Well, that wasn't entirely true. First, there is a scene in a public restroom, where we find Jakob sitting on the toilet when he notices that another one of the hoodlums has just walked in. He gets up, giving us a lovely shot of his& leavings (which, by the way, look like he's been eating nothing but blood pudding and tar), then proceeds to sneak up behind the teen and bash his head against the wall. Then Jakob drags the teen over to his toilet and drowns him in unflushed toilet water and bloody black pudding-shit. Lovely.

Back home, Jakob notices a stray dog sniffing around his cellar. Evidently, the bodies are starting to get a bit ripe. So, he begins to go through the painstaking process of lugging all the bodies from the cellar to the attic. As anyone who has ever tried to move a dead body will tell you, moving that much dead weight on your own is not easy, particularly when you have to get it up a ladder. Not& not that I'd know or anything. Midway through the ordeal, Jakob is interrupted by a knock at the door. It's Debbie, dropping by for a surprise visit. When she sees the bodies strewn about his hallways, Debbie justifiably freaks out. Less justifiably, she tells Jakob she hates him and wants to kill him. I'm not so certain about that bit. I mean, you find out your trusted friend is a serial killer, okay, some overreaction is understandable. But denouncing a guy for murder and than threatening to kill him (with the giant knife hanging on his wall, no less), especially when he was killing the people who beat you within an inch of your life, is just a little off. 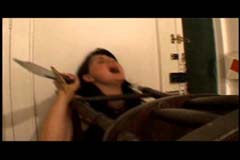 Ah, knife vs. chair. The epic struggle continues.Sensible or not, Debbie and Jakob go through an elaborate ballet of who's-trying-to-kill-who, with each one alternately trying to reason with, trying to disarm, and trying to subdue the other. Eventually, Jakob knocks her out by - I kid you not - throwing her on his bed. He knocks her out with softness. Then, while she's unconscious, he smothers her with a pillow and falls asleep beside her. However, it seems that Jakob has been lulled into the belief that people are all incredibly easy to kill just because all of the hooligans were. Debbie wakes up quite alive the next morning, shocked and disgusted to find the man who tried to kill her sleeping comfortably beside her. Being as quiet as possible so as not to wake him, Debbie creeps downstairs and out of the house. No, I'm just kidding. That would make sense. Instead, she creeps up into the attic. That's right, she has the perfect opportunity to escape, and instead she goes into the most inescapable part of the house, which also happens to be the poorest lit, meaning she has the greatest chance of bumping into something and making a lot of noise. And that's just what she does.

Awakened by a loud thump from the attic, Jakob climbs up there, knife in hand, looking to "talk." Debbie isn't buying it, showing remarkable intelligence for a woman whose recent actions would seem to indicate that she is retarded to the point where it is fairly amazing that she can dress herself without assistance. Trying to prove that he is really just a nice guy, Jakob drops the knife. Debbie, of course, picks it up. There is a brief scuffle, in which Jakob hits her on the leg with a hammer that was conveniently laying around (sure, the giant knife was introduced in act one, but the hammer? Meh, just happened to be there.), and she retaliates by burying a giant knife in his chest. As Jakob lays there dying, Debbie scurries out of the attic and locks the door behind her from the outside, trapping him should he summon the strength to get up. Then, as she's climbing down the ladder, her injured leg gives out and she slips, tumbling all the way down the stairs and bashing her head on a table, which kills her. The end. Presumably all the bodies are discovered when one of the remaining hooligans comes back to take another dook in the bathtub or one of the cops comes back to steal more food, whichever comes first.

When all is said and done, Antisocial Behaviour isn't that bad, at least compared to what we usually face here. It's easy to imagine how this same plot would have played out if it was an American movie. The main character would have hacked the teens to death with an axe while stumbling through a rant about how he's God's messenger and he has to kill the demons, and someone would inevitably be killed by being hit with their friend's disembodied head. As it stands, however, most of the violence is not that disproportionate. The hooligans start off as minor annoyances, but they prove themselves to be real jackasses who frankly get what's coming to them. Jakob is crazy, but he's not cartoonishly crazy, nor does he pull off feats of superhuman strength or Bond villain-level ingenuity through the power of his own rage. While some of the murders are a little over the top, his actions are all retaliations against wrongs being done to him and the people he cares about, and they are all fairly within the realm of possibility.

That being said, this movie still sucks. This movie would have sucked no matter what. If Sir Lawrence Olivier himself came back from the dead to play Jakob, with John Barrymore as Hooligans 1-47, it would still basically boil down to Get Off My Lawn: The Movie. It's not about execution, it's about premise. Start with a lousy premise, and you're going to end up with a lousy movie. A movie that revolves around a guy whose supposed loneliness and psychosis make him totally unrelatable killing a bunch of people who don't even have names is never going to grab the audience, even if it is pulled off perfectly. Which this is not. The way it is written, there is only about fifteen minutes of actual movie to be found in Antisocial Behaviour. Man has run-in with punks, punks trash man's house, man kills punks, man gets into ultimately pointless life-and-death struggle with friend. All the rest is filler, and Vinson Pike knows it. That's why he pads this thing like a sixth-grader's bra. The flashbacks, Jakob cleaning up his house, Jakob moving the bodies from the cellar to the attic, the random motorist - all of these are long, boring, space fillers. Do we need to see the same damn flashback to Jakob's childhood that has no bearing on the events in the present day over and over and over again? We do if this movie is going to be stretched to ninety minutes.

On top of the thin premise, this movie is dragged down by inconsistency. For instance, the blood in the flashbacks and in the first murder scene (with the drunk who falls into the fountain) is actually pretty good, if a little unrealistically abundant. It's definitely better than I've seen in countless other movies with similarly small budgets. It actually has the color and consistency of - get this - blood. But this noteworthy achievement is all but forgotten by the last third of the movie, when it becomes a steady challenge not to roll your eyes as hooligan after hooligan is killed in an incredibly violent, yet puzzlingly blood-free fashion. And what was the deal with the public bathroom scene, when Jakob's fecal matter looked like melted licorice had been smeared all over the bowl. And I do mean "all over." They didn't have any problem coming up with a convincing dookie when Jakob found one in his bathtub. On the other hand, I do have to give it to the people behind Antisocial Behaviour for making it through a whole movie that includes a car being blown up and people being burned alive without resorting to crappy CG effects that look like something a spastic with arthritis would make in Mario Paint. 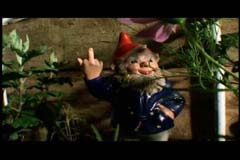 Just thought you needed to see it again.Of course, the real problem caused by Vinson Pike's inconsistencies comes at the end of the movie. The whole final act is nothing but events that could have been prevented if Jakob had just put the rest of the bodies in the car before he burned it, an move that seems like it would be entirely within Jakob's mental and physical capabilities. Then we get this chase-fight-conversation animal between Jakob and Debbie, resulting in two slow deaths. We are supposed to be stunned by the irony that if either of them had heard the other out, or taken a moment to think about what they were doing, they could have both avoided their untimely deaths. With Jakob bleeding to death in the attic, conscious but trapped, and Debbie bleeding to death downstairs, free but knocked out, they both die due to their own impatience and inability to communicate. It is supposed to be tragic. It is supposed to make you think. Instead, you end up scratching your head and thinking, "Wait, the burning car was really that insignificant?" That is because there is so little effort put into making these characters human that it's impossible to feel any connection to their little predicament, especially when there are so many plot holes demanding your attention. Antisocial Behaviour is the product of some really decent talent, and they make quite a bit from a tiny budget. Unfortunately, it is weighed down by taking itself way too seriously, so all that effort goes to waste. In conclusion, it is bad, but a classy, British sort of bad.