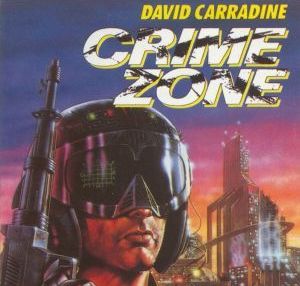 Overview: The great nation of Peru lets some unscrupulous idiot talk them into hosting a hot new sci-fi movie shoot, slowly realizes that the movie they signed up for involves David Carradine in a mashup of Blade Runner, Bonnie and Clyde and a dash of 1984, and then kicks everybody out and disowns the production. Don't you love a happy ending?

The Case For: By the time David Carradine is finished double-triple-double crossing the protagonists, the bad guys, and himself, you won't have any idea what the neon-backlit fuck is going on. That wouldn't normally be a "case for", but the rules don't apply in...the Crime Zone.

The Case Against: The main character is called "Bone" and he's a member of a gang called The Fuckups with his right-hand cyberpunk bro Creon. That would be a terrible start even for a shitty Wayans-riddled parody action movie, but Crime Zone is 100% Stallone-faced serious, even in the scenes with zero-gravity flaming bar darts and official government penis inspectors.

"David Carradine will return in...Every Which Way But Dignity..."