The Bowman Trilogy, Part 1: The Trainer 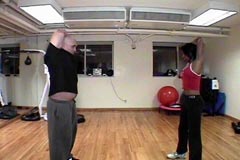 Woooooo.The fateful night arrives, and Bowman busts out his favorite trick - the totally unnecessary montage. This film is called The Trainer, it takes place entirely in a gym, and it centers around an encounter between a personal trainer and a client. Do we really need a ninety second stretching montage? When we see Susan stretching one arm, we can safely assume she also stretches the other one. We don't need a jump cut to a shot of the other arm in mid-stretch. No one is watching this and thinking, "Oh man, she only stretched one side. Is she only planning on working out one half of her body, gradually transforming herself into some sort of lopsided monstrosity?" That would also be more interesting than what actually happens in this movie, but alas, Vince Bowman and his endless homage to stretching dash all hopes against the rocks of proper workout procedure. Some of the shots in this thing go on so long that the actors start looking around, wondering if they missed the cue to stop. Wonderful, just wonderful. 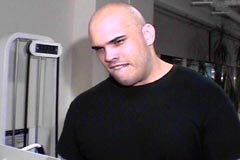 What a stud.When the montage finally ends, coinciding with the screen area shrinking by fifty percent for some reason, we get the sense that Felix has been working Susan pretty hard. He leads her over to a machine to work her lats. Even on the lowest weight, Susan can only crank out one rep. Felix offers to help her with her technique, but when he steps in close to help her adjust her stance, Susan scowls and snaps, "Felix, can you back up; you're making me uncomfortable." Never mind that the guy stayed late just to give her a free training session, or that she couldn't have been happier during the whole stretching montage when he had his hands all over her to help her get into the right position. Now he's trying to help her find the best grip to maximize the effectiveness of the exercise, which is his, you know, job, and suddenly that's crossing the line. Felix keeps his distance, but encourages Susan to do one more rep. She fails, prompting a sudden shift in Felix's demeanor. "Damn, bitch, you can do one more!" It could be a flash of unreasonable anger from a better actor, but from Felix it just sounds queeny.

Unfortunately, Susan can't stand queens. Unfortunately for her! As she storms off, Felix loses it. He reaches out and smacks her across the face. Well, actually he reaches out and smacks the air a couple feet in front of her face, but she seems fairly stunned by it all the same. Felix throws her to the ground and starts lamely kicking at her in a way that suggests he is not so much trying to do damage as he is trying to get her to pay attention to his foot. Susan, however, does not want to pay attention to his foot. She trips him and gets to her feet, launching into one of the worst choreographed fights ever put on film, at least until Urban Ninjas would come along two years later. Even though clever moves like sticking out her knee and allowing Felix to ram his crotch into it appear to give her the upper hand, Susan loses the fight when she falls backward and hits her head on a metal beam, knocking her unconscious. 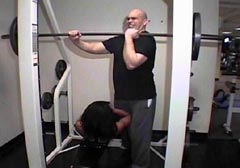 Artist: Susan. Medium: Elbow on Balls. Title: "The Wince."Felix takes the opportunity to lay Susan's body out on a bench, with a barbell suspended precariously above her. One by one, Felix lugs huge weights onto the barbell, presumably with the intention of letting it fall on Susan, crushing her. Unfortunately for him, he put too much weight on the bar and finds that he actually can't move it. His futile efforts buy Susan the time she needs to wake up and elbow him in the groin. Susan scrambles to her feet just as the shock of taking a direct shot to the apple bag for the second time as many minutes causes Felix to collapse onto the bench. She tries to make a break for it, but despite - or perhaps because of - his crushed 'nads, Felix refuses to let her go. He grabs her leg, leaving her no recourse but to turn Felix's own implement of death against him. Yup, the barbell that Felix himself could not budge proves no match for Susan's might as she releases it from its shelf and lets it plummet down onto Felix, causing apple juice to splash across the floor. My best guess would be that the apple juice is supposed to be blood, but& I don't know, man. Mix some water with some ketchup, and you've got something more convincing than this. This stuff isn't even red. As Felix slips into unconsciousness from the weight resting on his meteoric ass, Susan looks at him and quips, "No pain, no gain."

The next thing we see is Susan working out on a punching bag. As she slams blow after blow into the bag, she also gives a voiceover to conclude the film. I guess Adam Aronson was busy being awkward and wormy somewhere else.

Let's take a moment to examine just what's wrong with that conclusion. First of all, there was only one character in this movie beside Susan and Felix - the receptionist - and she definitely knew something was wrong with Felix. She kept trying to indicate as such to Susan. So that's bullshit. Second, "didn't have no one to make sure he was taking his medicine?" After expressing herself with articulation throughout this entire movie, now it's "didn't have no one?" Vince Bowman doesn't write no good. Third, what's with this sudden lapse into third grade prose? "He's cool. I like him." He's tall. I like ponies. Mommy is pretty. Finally, what's with the last bit? For someone who claims to feel sorry for the mentally ill man who attacked her, she seems pretty damn smug about beating the shit out of him. I have a sneaking suspicion that wherever he is right now, Vince Bowman is thinking about The Trainer 2, in which Susan goes on a rampage of beating up personal trainers with her powerful fists and stilted acting.

The acting in The Trainer is atrocious, but there are only three actors, so there's only so much damage they can do. Likewise, there are cars audibly whizzing by throughout the entire movie, but as annoying as they are, those sounds aren't that awful. Unsurprisingly, considering the complete creative control he wielded over this picture, the bulk of the harm is done by Vince Bowman himself. His first mistake was in the writing. I'm not saying that his dialogue is bad - wait, okay, yes, I am saying his dialogue is bad, but that's not the first problem. The first problem is that at some point he decided to sit down and write a short film about a psychotic personal trainer. This means that somewhere out there is a script with the words "CLOSE UP: Weights landing on Felix's butt" in it. Once he had a script, he then had to direct it, which is where he makes most of his other mistakes. I love a good montage as much as the next guy, but I don't need to see ninety seconds of jump cuts showing nothing but stretching, any more than I needed to see two minutes of a grown man tying his shoes in Urban Ninjas. What little dignity remained in this sad, strange little film was sucked out by Bowman's asstacular editing. When there needs to be communication between the writer's vision, the director's vision, and the editor, it's understandable that a mistake may occur every now and again. When the movie is writer, directed, and edited by the same person, you have to wonder just how things could go this wrong. Shots that go on too long, leaving the actors visibly concerned; shots that cut off too quickly, choppy transitions, shrinking screens, and jump cut after jump cut. I've had gentler seizures.

Okay, so The Trainer wasn't that great. But judging The Bowman Trilogy by its first segment would be like giving up on a restaurant just because the appetizer gave you cancer. The scores below are for The Trainer only. The full package will only be scored once all three segments have been reviewed. Tune in next time for the romantic thriller The Other Side of Pain!