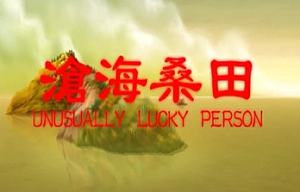 Overview: A mincy little teabag of a Chinese god-prince and his extremely stoned brother tip over some fat naked guy's bathtub in a high speed cosmological chariot race, thus flooding the world and obliterating all life on earth. As punishment, some other really dumb looking gods sentence them to go walk around as mortals for a while so this guy with really stretchy arms and his evil laser baby master can take poorly dubbed potshots at them with their psychedelic soul-eating death mirror.

The Case For: If you're anywhere near as high as the main characters, you might actually enjoy yourself (Note: none of this is possible).

The Case Against: You have eyes, ears, and some kind of connection between those things right? Yeah, case closed. 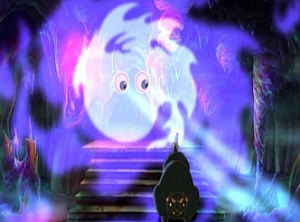 If you've always suspected that the average Netflix user reviewer is severely retarded and secretly wished you had definitive proof, search no further. Whoever wrote "The animation is beautiful as far as I'm concerned" about The Lucky Dragon has provided as much as you'll ever need. "Hmm, yes, I just love how exquisitely that lumpy midget child's giant honking old Belgian man schnoz plays off the elegant shapes of his bald brother/sister's samurai pigtails, and the luxurious stretchiness of the 8 foot tall bulimic guy with crippling argyria really rounds out the scene."

The animation in this movie could be fairly described as many, many things, but rest assured that "beautiful" isn't one of them. A better word would be...would be...actually we don't know, because just what the fuck do you call any of this anyway?

In short, The Lucky Dragon is pure fucking psychosis in movie form. The sloppy degenerates spewing bullshit wishy-washy reviews for Netflix will try to tell you it's because the movie was dubbed entirely by a group of stoned community college students who had never seen it before or heard two words of Chinese outside of phonetically reading takeout menus, but even five seconds of watching this on mute is plenty to realize that no words can diminish the psychedelic madness lying in wait for you here. No language on Earth could possibly explain the mutant turtle pigs, shark dragon gators, immolated koala pandas, weasel Sammy Hagars (and weasel Van Halens[1]), bowling ball Banjo Kazooie Ozark hillbilly rock-a-fire jugband bears, pregnant Santa Dragonforce Gandalfs, or places we can only assume are meant to approximate what Emerson Lake and Palmer literally believe heaven looks like.

[1] We kept waiting for weasel David Lee Roth to show up and start a jam that would shake the very foundations of rainbow vomit acid trip Chinese heaven, but no dice.