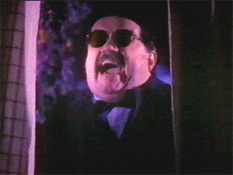 He must've caught a glimpse of his reflection in the glass.Next morning rolls by, and the gang of blue, denim wearing harpies gather at their workplace, "Bart's Salon". Well, I think that's what it was called, the sign was just some marker scrawls on a 8.5 x 11 inch piece of paper. I'm not really sure how "Bart's Salon" still stays in business, as they have the same knowledge of beauty as many members of the Jackson family. They all agree to meet together that night, have a seance, and be killed by something awful.

The women show up that evening and the airhead mystical woman brings a few thousand pounds of magic crap to aid her in predicting the future. She uses "Pulse Channeling" to predict a woman's upcoming boat trip. Another woman picks a card from her deck of "Taroosh Magic Cards", but chooses the "Death Card" and panics. I would be worried too if I grabbed a card like this, but the mystic assures her "everybody picks that card first." No wonder you don't see too many Egyptians around these days. Oh yeah, the film goes back to showing the fat guy laughing in the window again. Obviously the test audience couldn't get enough of this wacky character, or perhaps they were all related to him. The unfortunate woman who chose the "Death Card" goes upstairs to use the restroom and sees a picture of the hideous daemon superimposed over the inside of the toilet bowl. Was this supposed to be scary? Was it meant to remind us to keep our bathrooms clean? Somebody please explain to me the enigma of "Daemon In the Toilet"!

Anyway, the stupid daemon escapes (again), runs around pushing the batty women over, and the fat man outside the window keeps laughing. Eventually the ladies get sick of being killed by the monster, so they run outside and hang around the bushes on the lawn until the cops come. The Police attempt to subdue the demon by standing around while he crushes their brains like rotting melons, but this doesn't seem to work, so the undercover cop combines random hair chemicals to form acid. Or something like that, he just seemed to pour everything he could find into a plant mister and sprayed it on the devil. Oh yeah, the fat guy stands outside the window and laughs while this scene goes on. The hellhound from space vanishes, and all is back to normal. WHEW. 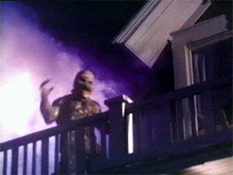 Somehow they convinced the devil to retile their roof.

I guess I could've summed up the entire movie in the following sentence: "women buy a haunted crystal which kills her stupid friends." However, the movie just stretches this already thin plot into 90 minutes of God knows what. What the fuck was up with the fat voyeur who hung out around their windows at all hours of the night? Why did some kid's face randomly appear over a spinning pentagram? Why do both the mother and daughter look about 80 years old? How come everybody in this film wears blue shirts and denim? How the hell does "Bart's Salon" stay in business? The sheer amount of these questions overloaded my already fragile mind and caused me to go off the deep end.

But other than those minor points, the movie was FANTASTIC!