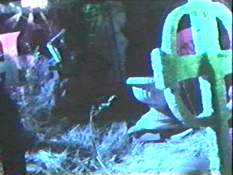 Nothing says "cemetery" like "blue-green lighting".Luckily the house passes all rigorous inspections (the guy stands around, mumbles something, and walks off the set), and the house opens up that night, with as many as eight guests cramming in at once. At long last we are finally able to bear witness to the fruits of their labor! The camera follows the eight people through the connecting "rooms of terror", and we experience first hand the sheer horror and fright these people exhibit when they see such terribly shocking things as a guy sitting around in a fake graveyard and a couple people typing on typewriters. The semi-homeless telepathic time-travelling Burger King man tells the people their fortunes and predicts various vague things which don't ever happen. The group moves to the jungle room, where a woman with sunglasses pretends to circumcise some kid who acts moderately displeased. Then it's off to the "torture chamber", where a man is being hit repeatedly with plastic egg beaters and having blood squirted ONTO him. Yes, the blood comes from offscreen, squirting all over his chest. I've heard of out-of-body experiences, but this was just plain stupid. The next room of terror is an operating room, where a woman gives birth to a long worm. To further reinforce the fact that it's a worm, the people shout, "IT'S A WORM!" and point to it. I'm guessing when they prescreened this film, the audience had too many questions about this operating room scene, often thinking that the woman was giving birth to a 1962 Sears refrigerator or some kind of wheelbarrow. Luckily for us, the dialogue clears it all up.

Some guy in a clown costume comes in, and we immediately know he's the bad guy because he's the only guest in costume (well, that and the fact that he's the only other character). Everybody else visiting "My First Haunted House" wears mundane, everyday outfits like a basketball jersey or (this one was more complex) a sheet with eyeholes in it. Yes, they actually threw a sheet over a guy and cut out eyeholes. Who needs CG technology when we've got ingenuity like this? Clowny gets his fortune told by Burger King, who predicts dark and scary things like death and murder and whatnot. Clowny leaves the room, and then the bad stuff starts happening. 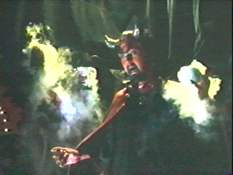 It's Satan. He's mad because he seems to be on fire.

Somebody stabs somebody else with a pencil (I don't know who these characters are, the film never bothers to tell us). Some guy pretending to be Frankenstein slaps another guy. A woman picks up a knife and drops it. Somebody almost threatens to decapitate somebody else with a piece of cardboard. Truly this is a very dark carnival indeed! All the haunted house employees get together and start incessantly babbling about how everything's going wrong and they were almost killed and blah blah blah. The dialogue gets so convoluted and incomprehensible that it all turns into a giant ball of sound, laced with the droning monotony of a damaged Casio keyboard trying to play background music with 600 pounds of raw reverb. I'm not trying to say the sound is bad, but you'd probably get better quality by shoving a Radio Shack tape recorder in your pocket while you roll around through mud inside an active volcano. One of the characters springs to his feet and mumbles, "My Frankenstein monster tried to KILL me, Hal. I didn't like it." This keyed me off to two very important points: somebody in the film was named "Hal", and one character doesn't like getting killed. I actually wrote those points down, hoping they would help me figure out the rest of the movie. No luck.

Anyway, all the lights suddenly go out, and the characters are forced to walk across the entire house to get to the fuse box and reset them. Everybody crosses each scene (again) and finally turn on the lights. Then they walk back to where they started from (showing every set they pass en route). At that point, they realize Hal is missing (see! Writing down his name DID help!), so they go looking for him. Hal apparently has the keys they need to get out, but when they find him, he's DEAD. So the group, like any of us would do, elects to bury Hal's body inside the prop graveyard, under a bunch of hay. They realize his keys are missing, and debate what they should do next with intelligent dialogues like the following:

Burger King: "Hal would want us to get out of here."

Some guy named "David", although he might've been named "George": "The fuck you say!!!"