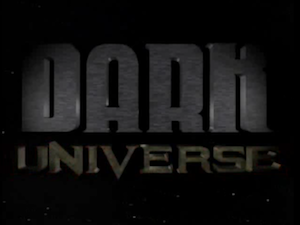 Overview: A rubber monster (and his best friend, a rubber armadillo on a stick) terrorize some morons looking for a crashed spaceship in a swamp.

The Case For: If you’re a big Joe Estevez fan/completionist, we guess you have to watch this. The good news is that he’s only in like 5 minutes of the whole movie, so you can just fast-forward past the rest of it.

The Case Against: “Executive Producer: Fred Olen Rey,” which is the movie equivalent of insects being covered in neon yellow stripes as a warning to stay far, far away or suffer the consequences. 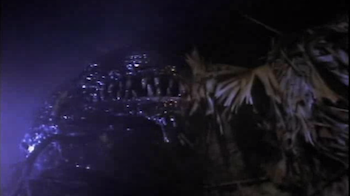 Despite the thin veneer of aliens and spaceships, Dark Universe is a thoroughly generic monster movie, which of course is exactly what we were expecting. Many an aspiring director has set out to shoot an epic sci-fi space adventure, only to realize that they’ve already spent 90% of their budget on handjobs and kratom and then start to panic. And so it came to be that the boundless possibilities of an entire Dark Universe of action and suspense unceremoniously crash-landed in a nice, cheap swamp. Of course, if the opening scenes in space are any indication, we should be glad to be staring into a poorly lit bog instead:

There are so many things wrong with that clip that we’re just going to have to list them:

That clip also introduces Joe Estevez, who is the big-name draw for Dark Universe, which immediately tells you that the rest of the actors are going to land on the forgettability meter somewhere between an unconscious Sam Worthington and those aliens from Star Trek that like to aggressively erase people’s memories. Joe is so famous relative to everyone else in this movie[1] that he doesn’t even have to talk to anyone else to collect his paycheck, he just sits in an office somewhere and talks into the camera for five minutes.

Joe's private space company CEO is just amazingly terrible at covering up the fact that his spaceship brought back an alien lifeform of pure evil. He calls a press conference about the crash and his immediate response to “Are you looking for the flight recorder?” is “What is this magical ‘black box’ you speak of? That definitely doesn’t exist, and I resent the fact that you’re accusing me of covering something up! I have nothing to hide!” He manages to stop just short of “Also, alien monsters definitely don’t exist, and they certainly don’t have an unquenchable thirst for human blood. Plus there’s no way they could have been on my spaceship, hypothetically speaking.”

That cover-up related incompetence is the only noteworthy scene in the whole movie, pretty much. The other 80 minutes is just a bunch of assholes (including the entire Tri-Lambda fraternity compressed into one horrible nerd, and a swamp sherpa who is either related to Jay Leno or has been hitting the chin putty) tromping around the Everglades poking snakes and occasionally getting all of their precious vital fluids drained out by a walking copyright infringement.

After talking to it, running away from it, and just kind of standing there waiting to die don’t manage to stop the alien killing machine, things are looking pretty bleak for Team Humanity. Somebody finds a flare gun in their survival gear, leading one of the other characters to remark “If re-entering the atmosphere didn’t burn it up, this flare gun certainly won’t kill it!” Which is a great point, really, let’s hope the movie doesn’t forget about it in five minutes! What’s that you say? They just shot it with a flare gun and it died instantly? Well, fuck. We’re starting to think maybe this movie isn’t very good after all.