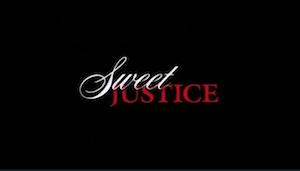 Overview: A group of badass ex-special forces women seek revenge on an evil crime boss who likes to murder their sisters and dump toxic waste. Well, at least most of them are badasses. One of them shows off her elite skills by beating up her own martial arts students, which either means she's a great fighter or a really shiity teacher.

The Case For: The protagonist's name is "Sunny Justice", which finally answers the question on all our minds: what would the female equivalent of a Seagal movie character name be? She also shares his weird enthusiasm for keeping workout machines outdoors.

The Case Against: The copy of this movie we found was subtitled "Vengeance of the Chickboxers", but it really should have been "Slow Assembly, Training Montages, and Detailed Backstory of the Chickboxers, with a Small Side of Vengeance, Eventually." 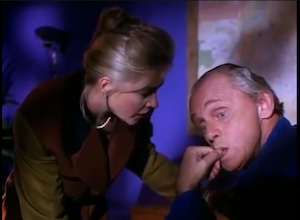 It feels like half of the movies we review on here come from the same four or five people, who somehow keep convincing people with money to shovel it into the blast furnace of their careers and turn it into unwatchable garbage. So we're going to start this one on a positive note, by congratulating director Allen Plone on actually knowing when to quit: this was his third and last movie for the big screen.

At least he can hold his head high, knowing that he went out with Sweet Justice, a movie which was incredibly ahead of its time in terms of female empowerment and just overall good taste. Well, except for the topless hot tubbing enjoyed by the all-woman elite strike force, other than that, Sweet Justice is all class from start to finish. The women stars of this movie are definitely treated as ass-kicking human beings first, and not just as eye candy, aside from the one scene where one of them is working as an exotic dancer (and, inexplicably, all the other women are watching intently and kind of nodding along while she shows her bare ass from every possible angle.) In a word: tasteful.

Come, grasshopper, I will train you in the deadly art of pulling your punches really badly and obviously. Step into my dojo.

We didn't mess with that last scene, by the way, so we can only guess what kind of monumental fuckup the editor was trying to cover by turning the movie into a slideshow. Aside from the martial arts being strangely hair-pulling and ball-smashing oriented, the other problem with that scene is that it was basically the entirety of the action in Sweet Justice. Supposedly this is a movie about an elite gang of ex-special forces women getting revenge on a crime boss for the murder of one of their sisters, but it takes 30 minutes for the murder to happen and a solid hour for the elite gang of women to actually be assembled. Most of that hour is filled with two talking heads having long, boring interpersonal conversations about their backstories. We can appreciate the attempt, but character development is kind of a waste of time when your characters are "punch woman" and "jeans cop".

Once all the pieces are finally in place, the usual righteous killing and kickpunching spree follows, although having to fight through an Old West set on the way to the crime boss's Beverly Hills mansion was a little confusing. Shockingly, there's almost a moment of actual introspection at the very end after the villain is dead, at which point normally everyone just rides off into the sunset and lives happily ever after. Instead, the sheriff shows up and points out that "look, he might have been a bad guy but you just murdered like 50 people in cold blood, I'm going to actually have to arrest you." Consequences for your actions in a shoot-em-up movie, how could this be?!

Don't worry though, five seconds later it turns out that the sheriff was the real evil mastermind, so she gets to kill him too. Or more precisely, he gets killed by his own dog:

That raises a whole host of questions, like is the dog so badly trained that it turned on him just like that? Or are all German shepherds imbued with a strong moral compass and unquenchable sense of justice? Also, are dogs venomous? Because he sure died really easy from being bit on the arm a couple times and then having his face licked. All we know is, that's the dumbest movie dog attack we've ever seen, and we've seen Blackenstein.