Noted political scientist Lowtax recently remarked that conservative-bashing jokes almost always felt funnier than liberal-targeting gags, mostly because mocking Republicans is like making fun of the teacher, and ridiculing Democrats is like teasing a retarded kid. Assembled by Hollywood's lean right-wing ranks, An American Carol certainly operates at the retarded-kid level, dishing out its political commentary in the form of pratfalls and face-slapping physical comedy. Chris Farley's unremarkable brother Kevin (previous credits include "Cop at Clem's House" in Joe Dirt and "Panda Express Panda" in Eight Crazy Nights) stars as a broad Michael Moore caricature. Much as Joe Biden and Sarah Palin found common ground in condemning the term "gay marriage," so should members of both parties unite in bipartisan denouncement of this tragically laughless farce.

The American Carol Web site advertises a phone number for ordering group ticket sales, assuming impromptu Republican conventions will assemble wherever this film is shown and thereby taking a dimmer view of conservative intelligence than the harshest liberal pundit. The American Carol home page contains a link to MooveAlong: Democrazy Inaction, a depository for jokes so miscarried in their delivery that they don't even register as attempted humor. In addition to serving as the death knell for right-wing slapstick, perhaps this film's abject failure will slow the tide of miserable spoof movies. If so, it truly will have performed its patriotic duty. 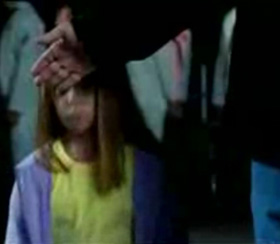 Only a liberal would botch a salute to a soldier by slapping a little girl during his follow-through. 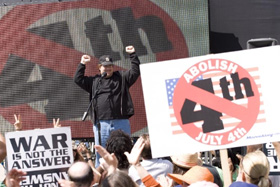 This sign is funny because war *is* the answer, you bleeding-heart pinkos!