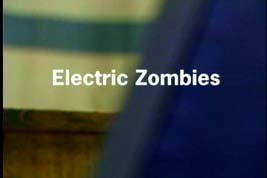 Overview: After a scientist develops a technology that can control people's minds through microwaves, a corrupt senator uses this ability to control people through their cell phones for some reason. I guess

The Case For: Sets the stage for Electric Zombies 2: Zombie Boogaloo.

The Case Against: A totally incomprehensible plot, made even more confusing by sadistic editing choices. Oh, and there aren't any zombies

Before we get started, I need to make this very important announcement:

ATTENTION: IF YOU ARE READING THIS REVIEW FOR THE PROSPECT OF ELECTRIC-POWERED ZOMBIES, ROBOT ZOMBIES, OR ZOMBIES WHO CAN SHOOT LIGHTNING FROM THEIR MOUTHS, YOU WILL BE SORELY DISAPPOINTED. PLEASE LEAVE NOW AND GO MAKE A MOVIE WITH THOSE THINGS IN IT. I WOULD LIKE TO WATCH THAT. THANK YOU.

Low-budget zombie movies are the lifeblood of the amateur filmmaking world. I have reviewed several zombie movies in my time, and I've passed on several more. When I heard that there was a movie about electric zombies out there, I thought to myself, here's a novel twist on the classic premise. I cannot wait to see what sort of antics these electric zombies get up to. After all, when you sit down to watch a movie called Electric Zombies, you can feel pretty secure in the notion that there will be zombies, and that these zombies will be in some way related to electricity. So you can understand my surprise and frustration at this totally zombie-free movie. In fact, there is such a palpable absence of zombies that in the event of a zombie attack, I think the safest possible place to be would be inside this movie. 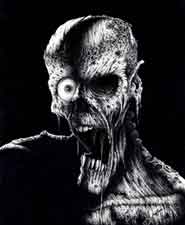 I know how you feel, buddy. I know how you feel.Now, the filmmakers behind this excremental film might try to argue with me, claiming that there are zombies to be had. I suppose they would have a point, but only in the sense that your mother meant you were a zombie when she told you to stop watching so much TV. The closest thing this movie has to the shambling, brain-thirsty undead is a few people - most of whom have little, if any connection to the plot, and even fewer of whom actually have names - acting strangely because their cell phones told them to. I would have known this if I had simply gone to IMDB, where the movie is summarized thusly:

"Cult horror director John Specht's low-budget feature, "Electric Zombies," neatly cobbles together two disparate genres: the conspiracy thriller and the horror/slasher movie. It also comments sardonically on the post-9/11 fear of the U.S. government-gone-haywire, as it recounts the tale of a misguided federal project to brainwash "enemies of the state" via cell-phone signals. The signals inadvertently grow in power and become redirected to the U.S., turning unsuspecting civilians into super-obedient zombies whenever their cell phones are answered. They receive self-destructive orders, which they follow will-lessly -- orders running the gamut from self-mutilation to suicide to homicide to riot. Those who manage to escape from falling prey to the menace must find a way to stop the threat -- before the U.S. erupts into unchecked anarchy."

Wow, that's a pretty detailed and thoughtful summary! Is it possible that there are people out there who found something meaningful and true under the surface of this movie? Could it be that I somehow missed the deep, powerful message buried beneath all of the shoddy acting and epileptic camerawork? Possibly. However, it is much more likely that the summary was written by Jonas Moses, one of the primary actors in the film, and the most biblically named man alive. And by "much more likely," I mean, "true."

That summary is also a steaming load of horse apples, not unlike the movie itself. The sardonic comments about post-9/11 fear boil down to someone mumbling "It's 9/11 all over again" or something like that while getting out of a car. Also, the signals don't inadvertently do anything. The creator of the evil signals demonstrates that every time the signal affects someone through their phone, there is someone else on the other end of the line, telling them very specifically what to do. And I don't know that I'd say these victims carry out their orders "will-lessly," largely because I don't think "will-lessly" is an actual word, but also because each time, the victim adds quite a bit of their personal touches to the orders, and on a few occasions, disregards the orders entirely. Don't even get me started on the threat of the U.S. erupting into unchecked anarchy. We'll hit on that a bit later. For now, let's start at the beginning.

Electric Zombies is a disjointed, confusing mess from the first frame. The movie begins with a rapid-fire series of images of such disturbing scenes of human depravity as:

-A woman with a cat 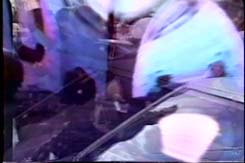 This does not bode well for the rest of the movie.Chilling. This whole series is basically a mass grave for cheesy camera effects. One image is superimposed over another, which is overlayed over another, and the whole shebang is shot through a fisheye lens, shot through with light blooms, and shaken like a ten dollar martini. Meanwhile, the audio alternates between shitty rap music and a radio voice explaining a secret CIA project to use microwaves for mind control proved successful, breaking down a human's mind to an animal state, capable of only fight of flight responses. This information will be utterly irrelevant to the rest of the movie. This bombardment of pointless images and spastic editing continues for a few minutes, which, if I was epileptic, would be enough time for me to swallow my own tongue, digest it, poop it out, have it surgically reattached, and then kill myself over the fact that everything tastes like poop now. It is only then that the following is displayed on the screen:

And ye shall know the truth

And the truth shall make you free

(Inscribed on the marble wall of the main lobby at the CIA Headquarters, Langley, Virginia)

Now, maybe I'm just an old stick in the mud, but if you're going to start off your movie with a relevant quote, isn't it customary to put it right at the beginning, before showing a vomitous series of inane images? Isn't the whole point to set the mood, not to just put up text that you think is neat? Well, I suppose if poor text placement was my biggest complaint against writer/director John Specht, I'd be a happy man. Sadly, there is not much hope for a guy who was financed by Ron Bonk. Anyway, after this barrage of puzzling, largely useless images, you'd think that the title would be something flashy. Then again, you'd also think that a movie with the word "zombies" in the title would have zombies in it. You sure are wrong a lot. 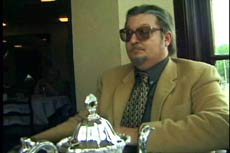 Frank is a chameleon. Right now he's blending in with my hatred.At long last, the movie finally begins, which turns out to be its greatest downfall. Things kick off with two men - Senator Wilson and Frank Olson - having a cryptic conversation in a diner. In addition to being a horrifying specimen of humanity, Frank is supposedly a dead man. On the books, he's been dead for years, having fallen out of a window. This is a reference to the Frank Olson who was involved with CIA experiments with LSD in the 50's. I guess John Specht's theory is that Olsen's staged death was a cover-up for his secret research into how to look as conspicuous as possible. The man looks like the lovechild of a zebra and plaid. Through their conversation, we get the idea that the senator is in control of a technology that Frank developed, a device that allows him to use a secret satellite to control people through their specially constructed cell phones. 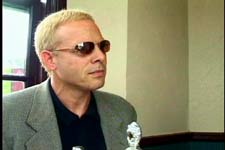 Sunglasses inside? Now I know he's evil!One might hope that the abominable editing would stop with the onslaught of images at the beginning of the movie, but one would be in for some severe disappointment. The general pattern of Electric Zombies is to splice together so many scenes into one giant mush that there is no way to establish any sort of continuity. That, combined with the fact that the sound is atrocious, makes it virtually impossible to figure out what's going on at any given moment, and why I should care In fact, outside of the senator and Frank, I only know the names of three other characters, and one of those is just an educated guess.

When Frank leaves, the senator makes a strange, coded phone call, which is his way of linking with the secret satellite. Or communicating to his team of CIA cleaners that he's going to commit a crime that will need their handiwork to cover up. Or both. I don't know. It really doesn't matter. The point is, between the senator and Frank, we now have our villain and our guy-who-knows-what's-going-on-but-will-only-reveal-bits-and-pieces-in-a-vague-fashion-until-it's-too-late, both crucial characters for any compelling story. Now all we need is a hero.