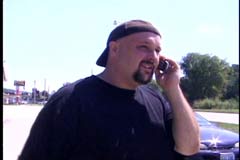 Detective John sets a new standard for gumshoe fashion!Fortunately, Electric Zombies is happy to provide such a hero, in the form of Detective John. Unfortunately, Detective John is a fat, sweaty, doughy mound of skin who may or may not be a crooked cop. That is to say, I'm pretty sure he's a crooked cop, since he hangs out with a pimp (who is probably also a cop) and he seems to be a jerk to just about everyone, but since eighty percent of the dialogue in this movie is inaudible and the other twenty percent is mostly made up of swearing about things people said in during the inaudible bits, I'm really just ascribing characteristics to people as best fits my needs. Our introduction to John comes as he drives with his new partner en route to some sort of shady deal. This whole bit is interspersed with shots of some balding guy at a truck stop, a Homeland Security raid on a video game store, a shot of the right side of the balding guy's head superimposed over& a shot of the balding guy's head, actually, and the balding guy beating a video store clerk to death with a hammer. The raided game store, the balding guy, and the dead clerk will all never be seen or referenced again, so you can see why John Specht would want to break up the introduction of the protagonist with all this stuff? No? Oh, I thought it was obvious. It's because he's Satan.

Detective John goes and meets with two black guys and their pet prostitute, Nikki. The lead black guy, who may or may not actually have a name, so we'll call him the Pimp, has the other black guy pat down Detective John for any weapons. The bodyguard is so massively uncomfortable touching another man that he ends up tapping the detective a couple times on the shoulder and turning away from the camera before he bursts out laughing. Then again, maybe he's just laughing at the fact that the pimp is having him pat down Detective John, when all later indication in the movie seems to suggest that John and the pimp have worked together for years. They are both dirty cops, after all. At least, I think they are. It's tough to tell. Despite the truly staggering police presence in this movie, we never once see an officer in uniform, even at the police station. Hell, John just wears a backwards baseball cap and the same oversized t-shirt the whole movie. He's undercover, you see, although he's not terribly good at it. He whips out his badge for pretty much everyone he meets. Somehow, I don't think that would fly in The Departed.

Later, Detective John meets up with some cronies at a seedy bar to discuss their plan for some sort of crime. He leaves them waiting to make a phone call to another crooked cop, who has stood them up to snort cocaine all night. After John hangs up, the camera goes to the coked up cop on the other end and shows him grappling with the demon of having more coke than he knows what to do with. Sad music plays as a single teardrop slowly trickles down his cheek. Naturally, since the crooked cop gets his own special scene with his own special music, he will never be seen again. When John goes back inside, the discussion of the plans rapidly devolve into a Mexican standoff. This is initially exciting, even though I honestly couldn't tell you what they were arguing about, why they all pulled guns on each other, or what they were planning to begin with. None of that matters. What matters is that when people pull guns on each other, they might kill each other, and dead people are right at the top of my list of People Most Likely To Become Zombies. Unfortunately, they all put their guns away and act like friend again. Oh well. 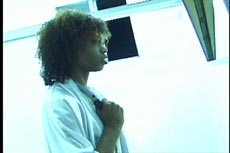 No, Nikki, don't! You'll never break the skin with that flimsy thing!The pimp drops Nikki off with the senator. The senator takes off after satisfying his jungle fever. Moments later, Nikki receives a strange call on her cell phone. Meanwhile, at a pornographic video store far, far away, another person receives a mysterious cell phone call. In both cases, there seems to be no one on the other end. Soon after, Nikki is compelled to take a knife and cut herself to ribbons. Well, at least she's compelled to wave a plastic knife around her chest, and then she's suddenly bloody, which is just as good, as far as this movie is concerned. Things don't go much better at the video store. All of a sudden, everyone pulls out guns and starts shooting one another. They must give out free guns with membership or something, because every last damn customer is armed and ready to rock. They all blow each other away for no good reason. Well, they pull their respective triggers and there are lots of loud bangs, but no muzzle flashes, bullets, or blood. Still, everyone dies, so we'll just have to take what we can get. Not that it matters. You guessed it, the video store will never be referenced again.

The pimp goes to Nikki's place to check on her and finds her mutilated body. The sight is so horrible that he is forced to run out in the hall and pretend to vomit. A lesser director might have his actor turn away from the camera while pretending to vomit, so as to leave something to the imagination. Not John Specht! He has the pimp pretend to vomit mere inches from the camera, as if to say, "Yeah, I'm not really vomiting? What are you going to do about it? Nothing, that's what."

Detective John meets with his cronies once again to discuss their mysterious plan. I'm going to cut through the suspense and tell you right now - I have no idea what their plan is. Detective John is constantly rushing off to meet with his fellow criminals to make sure everyone knows their part in some sort of big caper. They meet four or five times, easily, and each time it ends with either another Mexican standoff or everyone just running away from one another. They never actually do anything, though. Just thought you should know. 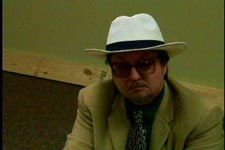 Frank's got his Confessin' Hat. Frank, having grown tired of his life of meeting with senators in diners, goes to the police and tells them all about his technology, and that they can stop it if they get the cell phones. Yep, this world-threatening epidemic is, in fact, limited to five phones. And it's not just any five phones. It's five particular phones. So unless you have one of those five phones, the secret satellite can't affect you, and there is nothing to be worried about. Statistically, you have a better chance of dying by unintentionally building your house on an Indian burial ground and pissing off the native spirits than you do of buying one of the evil phones of doom. I'm sorry, I'm trying to keep an open mind about this movie, but when the evil plot can be thwarted by switching to Cingular, I just can't muster the energy to be scared.

To the credit of the evil mind controlling satellite, some coked-up teen gets a call on her cell phone and blows away her coked-up friends, then herself. I& I don't know where these people keep getting guns. There are actually more than twice as many guns as characters with first names in this movie. Maybe that's John Specht's comment on our overly violent society. Maybe this movie blows goats. It's a toss up, but I'm putting my money on the goats.