Senator Wilson checks into a hotel and gets a massage from a nice young lady who is only too happy to oblige when he asks for a happy ending. For the first time in the entire movie, this one scene isn't perforated by jump cuts to irrelevant events, fades that go nowhere, or pointless cinematographical fuckery, just in time for a long, ceaseless shot of the senator's back hair. Yeehaw. 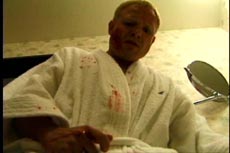 "If I die, any semblance of a plot dies with me!"After the massage, the senator goes to take a shower, only to find that his skin is melting off for some reason. Yep, the masseuse was actually some sort of secret agent and the massage oil she used was actually a delayed-action, painless acid of some kind. I guess. Whatever the case may be, every place that she touched is now burnt and peeling. Too bad he asked for that happy ending. Too bad for the audience, at least. When a half dozen people opened fire on one another in a video store, there wasn't a drop of blood, but when a senator gets an acidic handjob, we get to see his electric zombie fall off, if you get my meaning. I'm talking about his penis, here. Yep, his junk falls off and sits there on the bathroom floor for a good long while, until the senator has the common decency to die on top of it. 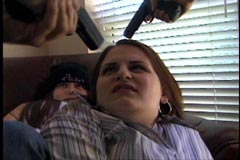 Doug's wife must be allergic to guns. They seem to be causing her to melt.Detective John gets a lead that all of the cell phones that contain the technology may have come from a shop owned by a crooked realtor, Doug Circe. Taking it upon himself to solve this case that has yet to affect him in any way, Detective John hauls Doug into the station and has some of his criminal buddies inject him with what I can only assume is some kind of truth serum right in front of his boss, a supposedly legitimate cop. Meanwhile, some of John's other criminal pals kidnap Doug's wife and skanky sister-in-law. John and the police captain take Doug to some random junkyard to interrogate him. Seconds later, the criminals show up with Doug's wife and sister-in-law to use as leverage to get him to talk, as if the truth serum wasn't enough. Although the captain and the other semi-honest cops on the scene have seen most of the criminals before (in fact, a fair percentage of the criminals are actually cops themselves), the cops pull guns on the criminals, and vice versa. John keeps everyone from killing each other long enough for Doug to confess that his store got the cell phones from Senator Wilson.

Sadly, continue it does. After he is released, Doug gets a call on his phone. Oh no! His phone is an evil one, too! He is compelled to find and kill Frank, which he does. Unfortunately for the Dougster, Frank was hiding out at the police captain, and both the captain and Detective John happen to be hanging out nearby. They blow him away. Plot resolved. Or is it?

Just when you think/hope/pray the movie is over, we cut to a fat man in a hot tub. A woman appears through the steam and pushes his head under until he drowns. His even fatter wife comes home shortly thereafter, and when she finds her husband floating face down in the hot tub, she does what any wife would do. She doesn't call 911. She doesn't call the cops. She doesn't even pull him out of the tub. She goes to the kitchen, gets a beer, sits on the couch, and throws on the TV. Then she pulls out a gun a shoots herself in the head. Sure. Why not. The end.

If you've just read through this whole plot description and found it difficult to follow, there's a reason for that: it doesn't make sense. Granted, I left a lot out for brevity's sake, but none of it would have helped. If it was too confusing to read, tough. I did what I could with unbelievably shitty material. A low budget is no excuse for a movie like this. Hell, a massive quantity of LSD is no excuse for a movie like this. If I understand the main idea of the movie, it is that a corrupt senator has access to a satellite that can link up with a few select phones and control the listener. However, as far as I can tell, he only uses it to make completely random people kill each other or to bump off hookers that he's slept with. I don't know who orders the senator's death, but it seems like even if it was some sort of government conspiracy to get control of the technology back in the hands of, say, an evil tobacco lobbyist or something, it still wouldn't be a threat, because the satellite only works with five goddamn phones! I don't know what sort of comment this is supposed to be making about the post-9/11 government. I guess it's saying that you shouldn't sleep with senators or something.

Although the plot of Electric Zombies is an incomprehensible labyrinth of stupidity, it is important to note that the movie is also a failure on every conceivable technical level, as well. The sound is horrendous. I'd like to think that if more of the dialogue was audible, the movie might make a little more sense, but I'd also like to think that I have super powers. I don't know if it was writer/director John Specht's fault that the almost every scene was perpetually interrupted by unnecessary cuts, fades, and edits, or if it was some rogue editor who took it upon himself to turn this movie into psychological guerilla warfare, but I'm damn well going to blame John Specht anyway. It sure as hell was someone's fault. And it's not even like the edits are all competent, just overdone or overly artsy. The editing is awful. Awful. I'd call it amateurish, but I don't want to discourage amateurs, some of whom may have the potential to improve. I mean, one scene stops midway through and then starts over from the beginning again. That's a problem.

When a bunch of college kids throw together a crappy film of themselves running around the woods, pretending to be chased by a killer, and they decide to call it a movie, I can forgive that. When a crazy old man decides he's close enough to death that he doesn't care what he does with his money, so he pays a bunch of women to satisfy his bizarre fetishes and calls it a movie, I can forgive that. When someone strings together a bunch of pointless gibberish, throws enough fat people in it to populate a small Wisconsin town, and puts the word "zombies" in the title, even though there are no zombies in the movie, that, my friend, I cannot forgive.