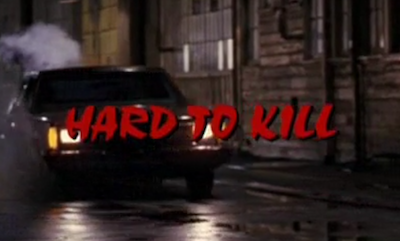 Overview: Steven Seagal is MASON STORM, a senator-hating vigilante who gets put into a coma for indiscreetly videotaping secret mafia crime sprees with his 30lb baby’s first home action news camcorder...and vows to take revenge on some random politician even though he pretty much got his own wife killed by gross incompetence.

The Case For: Provides a cheap alternative to testosterone replacement therapy, since even hearing the name MASON STORM will immediately make you 500% manlier just by association.

The Case Against: There is no volume setting that will let you hear Seagal’s barely-whispered mumblecore one-liners without also blowing out your eardrums in the next running gun battle. 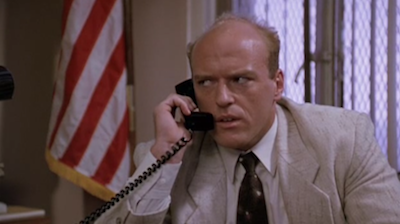 We don’t have to tell you that most Steven Seagal movies fall squarely into the category of brainless action C-movies full of corny celery-crunching vertebra adjustments and squinty narcissistic camera mugging, but most of them stay pretty well under our radar for sheer mediocrity. But way back at the beginning of his career, Seagal hadn’t quite hit the stride or rhythm of action blandness, and more importantly, he hadn’t learned how to read (scripts) before signing on to them. This simple life skill applied to any random page of the script would have saved poor Steven from the tragicomedy that is Hard to Kill. Or maybe he did read it, but his eyes were only drawn to the parts involving mystical Eastern faux-wisdom and gut punches:

Hard to Kill is the story of MASON STORM, who is the manliest macho man and loose cannon coma patient to ever grace the LA police force, which might explain why he still has a job somehow despite being just staggeringly terrible at every part of it (not to mention the whole 8 year coma and/or legally being declared dead thing). His badass character introduction consists of him “foiling” a liquor store robbery by standing there and smugly watching the clerk get blasted in the gut to death with a shotgun at point blank range just because he wants to wait for the perfect moment to unleash his flaccid one-liner and clean up on the the four-to-one odds[1].

MASON STORM’s other main assignment seems to be covert surveillance, which is a great choice for a muscle-bound water buffalo who has all the stealth abilities of Solid Snake wearing a suit made entirely of bubblewrap and blinking LED Christmas lights. His giant shotgun mic and need to stand up in plain sight to get the optimal framing on his stakeout video sadly compromises his identity, and the resulting mob hit kills his wife and puts him into a really stupid coma. Unfortunately for us, he’s sent to the Patch Adams Memorial Comedy Coma Ward to recuperate, where the jokes are terrible, the coma beards are hilariously fake, and the gurney chases are plentiful:

[1] And then goes on to congratulate himself for totally failing to save the civilian by buying a bottle of champagne and going home to karate chop make sweet love to his wife.