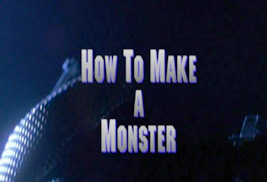 Overview: An evil video game comes to life and kills its programmers. No, seriously.

The Case For: Been looking for a movie that's all about a technology the director clearly knew nothing about, but your DVD copy of "Hackers" disintegrated from overuse? You could use this DVD as an ashtray while you waited for your new copy to come in.

The Case Against: The movie is filled with the ugliest women this side of the Aaron Spelling household. 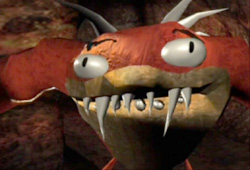 Delta Burke? What the hell are you doing in my movie?!

In my experience movies about popular technology are doomed to fail from the start. This is because Hollywood, the Luddite town that it is, has not upgraded its computer equipment since the late 1800's. Most studio IT systems are powered by steam and magnetic punchcards, and instead of emails production companies use messenger pigeons.

Because of this trend "How to Make a Monster" has two things going against it from the start. First: It is a movie about an evil video game, a terrible concept worsened by the fact that writer/director George Huang is a gigantic, stupid, worthless idiot who knows nothing about computers. This isn't me being a condescending nerd: The man could easily fail out of a YMCA computer literacy program, even if it wasn't graded. George Huang is the kind of person who makes tech support jockeys shoot up their offices.

The second problem is that it manages to suck more shit than its remake fodder, an Ed Wood movie of the same name. Granted, I'm not an Ed Wood fan. I'm not bitching about the movie ruining his "artistic vision" (as if he had any) or making some clichéd argument about the sad state of Hollywood remakes. Ed Wood sucks. Ed Wood movies are reserved for community college dropouts, who split their McDonald's wages to buy a bag of pot so they can sit around, watch "Plan Nine," and ironically say it's "the best movie ever." You know that guy who listens to "Hulkster in Heaven" a few times a day and still thinks it's hilarious? The one who has a shirt that says "Chuck Norris doesn't sleep; he waits"? I guarantee you he's a huge Ed Wood fan and possibly one of the most boring people on the face of the planet.

Still, if you threw those same dropouts a bag of Maui Wowie and a laptop, I know for a fact they would write a better movie than "How to Make a Monster." Don't believe me? Look at this expertly constructed animated gif: 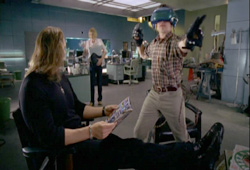 In case that muddy, dark screencap didn't tip you off: "How to Make a Monster" opens with blurry shots from a retextured version of the Windows 98 "Maze" screensaver. That's right, folks. The first minute of the movie looks like the cameraman was jabbed in the eye with a stick and forced to wander down a hallway covered in feces.

But don't feel left out, as soon as the "real" movie starts everyone experiences the sensation of taking an oak switch to the eye and staggering around in a septic tank! That's because this movie is a piece of shit and your roommates/friends will undoubtedly punch you in the face for making you watch it! It turns out the video at the beginning is actually a demo of the game "Evilution," and the company making the game is conducting a test market survey. Of course they say the game sucks, and of course the boss, a horrendously ugly woman with a facial mole the size of a third world country, fires her programming staff. She tells her lackey, Peter (Steven Culp) to hire three new programmers to make "the scariest damn game possible." Peter, who is apparently deaf, confuses "hire new programmers" with "hire three annoying dilweeds who you'll hate the entire movie."

I need to get something off my chest. George Huang is a tool. A massive tool. When he walks into Home Depot security detains him for trying to shoplift himself. He is so incompetent, so utterly lacking of any artistic ability, that there is no way he doesn't know he sucks. He doesn't know anything about video games or making movies, so what does he do? He makes a movie about video games. I know next to nothing about making games myself, and I can still tell this movie is totally factually inaccurate. This is not me being a movie snob, and I understand taking liberties for the sake of art, but still. This movie would make Gabe Newell stand up and scream if he wasn't stuck in his office chair.

"But why does that make him a bad person, Evan?" you may be asking. Well, reader, let me tell you: George Huang hates moviegoers. He hates them with a passion. He insults most of their senses plus their intelligence with "How to Make a Monster," and undoubtedly laughs at the fact while he jerks off to pictures of female bodybuilders. Besides the fact that he made one of the main plot points literally implausible (three programmers have one month to create a video game), and the fact that he tells us video games only need three components to, you know, be functional (artificial intelligence, sound, and weapons), the three programmers in question are literally the most annoying characters in the history of cinema.