Artificial intelligence
Sol, the game's AI programmer, is a black man. Being an Asian himself, Huang wants his viewers to know he, like most major universities, respects diversity above all. As such, the movie constantly references Sol's race. For starters, every single time he is onscreen by himself, some ungodly terrible rendition of R&B music (performed by an epileptic on a MIDI keyboard) plays. But that wasn't enough for Huang: He also made sure that every single fucking line Sol has somehow involves being a black man: 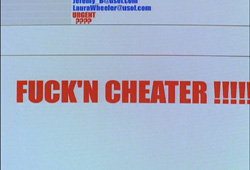 Sound
I would like to think that making a movie entailed a director having some sort of common sense. For instance, when one of your main characters has a lot of speaking time, you might not want to give him a debilitating speech defect and then hire an actor who fucking sucks at faking a stutter. Well, Bug proves, once and for all, that being able to suck a mean dick will get someone a movie deal faster than any amount of talent would.

Oh, and that's all besides the fact that the bottom half of his face is covered in what appears to be human waste. A clever reference to Huang's favorite hobby? Who knows?

Weapons
Rumor has it that Hardcore was actually a last-minute addition to the film. Apparently he was hired when the third gimmick, a ruddy-faced Eskimo with a mystical spear and a pet seal, backed out. Since Huang could not find a wise old Indian with a drinking problem to fill the role (Indians are traditionally excellent game programmers), he decided to go with something slightly less plausible: A tough guy with an obsession for ancient weaponry.

You see, here is the thing about Hardcore: Not only does he look like the guy who runs the Medieval Connection booth at the mall, he is a lot like Sol in that every line he speaks has to reference his gimmick. As I'm sure you're aware, the average moviegoer has the attention span of a moth, and if he is not constantly reminded of a character's angle he will almost certainly forget it. Again, here are a few real winners from the script: